Managed to snag a ticket to Euro 2008 in Austria and Switzerland this June? Cheer your team and guzzle beer by all means but when sober, do take time out to see these beautiful cities. Here’s what you should be doing (unless you are determined to only check out the pubs).

Managed to snag a ticket to Euro 2008 in Austria and Switzerland this June? Cheer your team and guzzle beer by all means but when sober, do take time out to see these beautiful cities. Here’s what you should be doing (unless you are determined to only check out the pubs).

Hofkirche, Innsbruck
You’ve seen The Sound of Music a dozen times; Vienna and Salzburg are two of the most romantic cities in the world. Shout yourself hoarse for 90 minutes in the stadium. Off the field, give your camera a chance!

1. Where: Innsbruck The Tivoli Neu Stadium will host three games.

Getting there: Fly to Munich in Germany (the closest international airport connecting India) and take a train.

Golden roof. This building, in the middle of the town, does not exactly have a “golden” roof, but the 2,500 fire-guilded copper tiles give the distinct impression of gold.

Hofkirche: This 450-year-old church with its Gothic architecture is Innsbruck’s most famous landmark. It is also famous for its high, slender colonettes of red marble.

The Wals-Siezenheim Stadium will host three games of Group D.

Getting there: Salzburg is two hours from Munich.

Ask your hotel where The Sound of Music was shot. Also check out the monument to Wolfgang Amadeus Mozart, who was born here.

Old town: The entire old town of Salzburg was declared a UNESCO World Heritage site in 1996 and is famous for its baroque architecture. Take time out to visit Fortress Hohensalzburg.

Schloss Klessheim/Berghof: These two places were popular retreats used by German dictator Adolf Hitler. The Schloss Klessheim was used by the Nazis to host major meetings. The Eagles Nest at Berghof was Hitler’s summer retreat and affords spectacular views of the Alps.

The Ernst Happel Stadium will host seven matches, including the final of the Euro 2008 Championships.

Getting there: There are daily flights to Vienna from Delhi and Mumbai.

Theatre and Opera: The Burgtheater is considered the best in the Germanspeaking world and if a show is on, it is a must-visit. If you want to watch a classical Hofkirche, Innsbruck music performance, find your way to the Wiener Musikverein, home of the worldfamous Vienna Philharmonic.

The Worthersee Stadium will host three games of Group B.

Getting there: You can fly into Klagenfurt or take a train from Vienna, which has direct services to India.

The Worthersee: Lake Worth is a unique alpine lake, famous for its warm waters. It was a favourite destination of Vienna’s nobility in the 19th century. The lakeside is dotted with small hotels that afford spectacular views of the mountains. Basel
The Swiss Alps, watch and chocolate factories and quaint towns—Switzerland has always been a tourist’s dream. Check out the towns before you head for the match.

The St. Jakob Park Stadium will host all Group A games featuring Switzerland, as well as a semi-final.

Getting there: Basel is two hours from Zurich, but thanks to high-speed rail connections you can reach Basel from Paris in under four hours by TGV trains.

Basel Munster: This red sandstone church is one of Basel’s several architectural highlights, and parts of the building are almost 1,000 years old.

Getting there: Berne is two hours south of Zurich Airport.

Albert Einstein figured out his Theory of Relativity while employed at the Berne Patent Office. Today, the entire old town centre is a UNESCO World Heritage site.

Bundeshaus: The seat of the Swiss Federal Parliament is one of Europe’s more impressive old Parliament buildings.

Barengraben: This is literally the Bear Pit, and while it does not involve wrestling with bears, it does hold a large enclosure of Bernese bears, which feature on the city’s coat of arms.

Getting there: Geneva doesn’t have direct flights from India, but is just a few hours drive from Europe’s major aviation hubs.

Jet d’Eau: The famous water jet on Lake Geneva is one of the city’s most famous landmarks. It pumps out 500 litres of water every second, 140 feet into the air. It is visible when you fly over the city.

Palace of Nations: The headquarters of the erstwhile League of Nations is today used by the United Nations. It has several acres of beautiful lawns and is a great place to visit. 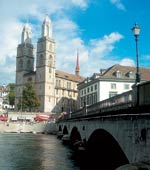 Getting there: Zurich International Airport has direct flights from India.

Lake Zurich: Bounded by the Alps, this lake offers picturesque views of the mountains and in summer you can even swim in it.

Are you ready for Karnataka?