An elegant watch doesn't necessarily have to cost you the moon. These timepieces will make your wrist look good without burning a hole in your wallet.
Print Edition: Sep 15, 2013 Victorinox Swiss Army Airboss Automatic Titanium
Victorinox
SWISS ARMY AIRBOSS AUTOMATIC TITANIUM
A blast from the past as far as aviation watches are concerned, the Swiss Army Airboss Automatic Titanium features a sandblasted matte titanium dial and a dark brown leather strap inspired by pilot jackets from the 1930s. The case, measuring 42mm in diameter and made of sandblasted grade 2 titanium scratch-resistant sapphire, is waterproof to over 100 metres. And as if that's not enough, the watch displays military time on the inside of the crystal. Go ahead, be Clark Gable from the wrist up! Tissot T-Complication Squelette
Tissot
T-COMPLICATION SQUELETTE
Tissot reveals the inner workings of its expertise with the T-Complication Squelette. The watch houses a new, specially developed hand-wound ETA movement that is exclusive to Tissot. It was adapted from a pocket watch but with special cut outs. The 45mm elegant timepiece features navy blue details for the marker chapter ring and offers an angled design appeal. The domed sapphire crystal is finished with a double anti-reflective coating and the watch is water-resistant to 50 metres. A lovely mix of modernity and crafstmanship. Oris Aquis Depth Gauge
Oris
AQUIS DEPTH GAUGE
Revolutionising the world of professional diving, Oris applies the Boyle Mariotte Law to its patented Aquis Depth Gauge to come up with an instrument that promises to be man's best friend 20,000 leagues under the sea. The black dial of the stainless steel device accommodates a full-on depth gauge complication (which involves letting water inside), even as its deceptively simple design ensures that the basic functions aren't relegated to the backdrop. Top it up with a textured ceramic bezel that rounds out the 46mm case, and you got a winner underwater!

Seiko Premier
Seiko
PREMIER
Now, this is one watch that never says die. The Seiko Premier Kinetic Direct Drive 100th Anniversary incorporates the Kinetic Direct Drive caliber, which not only powers the watch as you move but also gives you the option of winding it by turning the crown. The timepiece equivalent of the crossroads where classicism meets modernity, the Seiko Premier promises to be a delight for the watch collector as well as the practical office goer. Balmain Elysees Round Automatic Watch
Balmain
ELYSEES ROUND AUTOMATIC WATCH
Swiss watch brand Balmain's new self-winding Elysees Round Automatic watch is for those who prefer understated refinement. Decorated with Pierre Balmain "PB" logo on a sunray-brushed silver background, the timepiece comes with a 40mm case in polished stainless steel and pink PVD. The watch is water-resistant up to 30 metres. 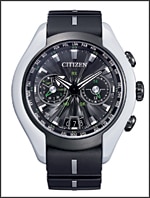 Citizen Promaster Eco-Drive Satellite Wave-Air
Citizen
CITIZEN PROMASTER ECO-DRIVE SATELLITE WAVE-AIR
The Promaster Eco-Drive watch has a 'both-side' titanium case. Inspired by the rotating fan blades of an aircraft engine, the dial consists of three transparent layers, over which indexes, windows and hands are laid out respectively. Housed in a 49.5-mm case that is robust and masculine, the timepiece blends impeccable timekeeping technology with aeronautical aesthetics. 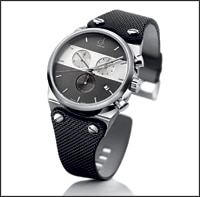