Rolling through the years

It has been more than a century since the first Rolls-Royce Silver Ghost rolled off the company's assembly line. From then on, the Spirit of Ecstasy that adorns every Rolls-Royce hood has become a globallyrecognised symbol for the ultimate in luxury.

Since 1904, after the engineer-and-businessman duo Charles Rolls and Henry Royce formed their motoring marquee, the company has championed advanced automobile manufacturing, even as it sticks to the traditional practice of building each automobile mostly by hand.

India's love affair with Rolls-Royce began in 1913 when the seventh Nizam of Hyderabad-the then richest man in the world-Mir Osman Ali Khan, got one customised and shipped for his personal use. The elegant car was a rich canary yellow and had gold mountings and a silver-finished roof that was custom-designed for the Nizam. For India, which was still a British colony at the time, it was the moment that marked the arrival of the first imported car for an Indian customer. Today there are close to 300 Rolls-Royces in the country, ever since the company re-entered the Indian luxury market in 2005.

Cars produced by Rolls-Royce are an engineering marvel; one still-functioning Silver Ghost from way back in 1907 is a fitting example. As the company rolls out a glimpse of its latest endeavour-the manic-looking Wraith 2013, we take a look at some of Rolls-Royce's most iconic creations and their autoevolution, over the last century. Each Rolls-Royce automobile passes through 60 pairs of highly-skilled hands before it is presented to its owner
Every Rolls-Royce vehicle is built by hand at the company's state-of-the-art headquarters at Goodwood, England. Designed by renowned British architect Sir Nicholas Grimshaw, the building was built to be environmentally-friendly.

Silver Ghost
1907
Silver Ghost
It had a six-cylinder engine inside a silver four-passenger chassis. The 40 horsepower (hp) car stayed in production until 1925 and could be driven upto 15,000 miles. 1912
Double Pullman
This still-functional Silver Ghost variant limousine is powered by a massive 7.3-litre engine. In 2012, it went under the hammer at an auction which fetched its owner a whopping Pound 4.7 million

Phantom
1925
Phantom
This four-door sedan came with two transmission options: 3- or 4-speed manual gears. In addition, Rolls-Royce added some muscle by installing a 7.7-litre engine that delivered 95 hp and a topspeed of 145 kmph.

Phantom
1971
Corniche
The 70s proved to be a momentous year for the company as it split operations between aeronautics and automobiles. During this time, Rolls-Royce produced a stylish two-door coach-built Corniche that was based on the Silver Shadow. Only 1,306 Corniches were manufactured

Phantom II Continental
1934
Phantom II Continental
This three-position drophead variant of the Phantom came with distinct bodywork and a shorter wheelbase that was envisioned for that obssessive, self-driving customer. Like all Phantoms, the Continental was also exceptionally well equipped. It had an automatic oiling, servoassisted mechanical drum brakes and electronic shock absorbers.

Silver Wraith
1946
Silver Wraith
Post World War II, Rolls-Royce relaunched the custom-bodied, extended wheelbase Silver Wraith. A predecssor of the latest Wraith, it initially came with a 4.2 litre sixcyllinder engine. This was later increased to 4.5 litres due to customer demand. Silver Shadow
1965
Silver Shadow
The swinging sixties saw Rolls-Royce appeal to a new breed of owners who fewer less frills and more function. Silver Shadow was the first Rolls to feature a monocoque chassis. Its topspeed was limited to 118 mph although it was capable of producing upto 220 hp at 4,500rpm. Ghost
2011
Ghost
Owned by the BMW Group since the 90s, the Ghost captures the essence of Rolls-Royce in its simplest, purest form. Its 6.6-litre V12 generates a stunning 563 horsepower. It's available in India for Rs 3.5 crore (ex-showroom Mumbai). Phantom Series II
2012
Phantom Series II
Combining state-of-the-art technology with timeless design, this second generation of Phantoms came in several variants: an Extended Wheelbase; a Drophead Coupe; and a Coupe. It exudes the motoring confidence of the legendary British marquee. This machine will set you back upwards of Rs 5.3 crore (ex-showroom Mumbai). 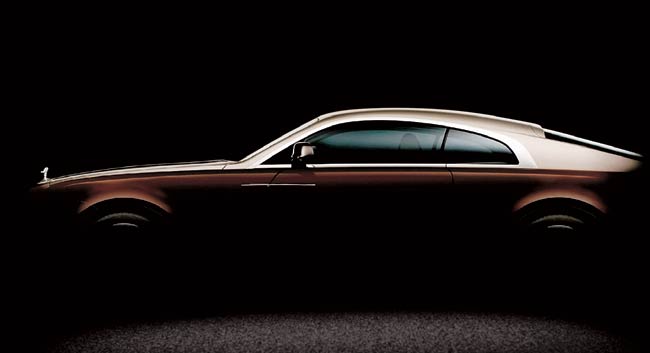 Wraith
2013
Wraith
The Wraith will be unveiled by Rolls-Royce at this year's Geneva Motor show. The eight-speed automatic, two-door coupe follows the curves and the sweeps of the original Silver Wraith, but its more modern highlights are unmistakable.