Revelling in the heritage of horology, these timepieces, with their stunning complexities and iconic designs, are a connoisseur's delight.
Print Edition: Sep 15, 2013

Revelling in the heritage of horology, these timepieces, with their stunning complexities and iconic designs, are a connoisseur's delight. A. Lange & Sohne
A. Lange & Sohne
1815 Rattrapante Perpetual Calendar
Two of the most popular complications in horology today are the rattrapante or split seconds chronograph and the perpetual calendar. The Lange 1815 combines them, then goes ahead and throws in a pair of additional complications to boot - a power reserve function and moon phase. In implementing these grand complications, Lange's master watchmakers also put to use traditional elements such as classic Arabic numerals, the railway-track minute scale, and the symmetrical arrangement of the subsidiary dials, as was once integrated in A. Lange & Söhne's historic pocket watches. 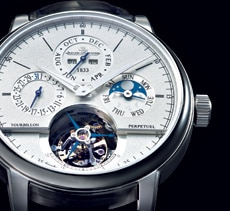 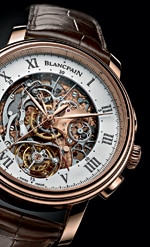 Blancpain
Blancpain
Carrousel Repetition Minutes Chronographe Flyback
It's the first timepiece to associate Carrousel and Repetition Minutes complications with a flyback chronograph in a self-winding version. Part of the Le Brassus Collection, it features the one-minute flying carrousel revamped by Blancpain in 2008 and an advanced minute repeater with a cathedral gong. This triple complication is presented in a red-gold 45mm case with a chapter ring, besides 30-minute and hour markers in Grand Feu enamelling. Blancpain's Calibre 2358, made of 546 components, offers 65 hours of power reserve and is characterised by 18-carat gold bridges and main plate. Roger Dubuis
Roger Dubuis
Excalibur 42 Skeleton Tourbillon
The Excalibur 42 Skeleton Tourbillon incorporates the flying tourbillon and the skeleton. The ergonomic 42mm houses the RD505SQ calibre movement and offers a light, spacious display of advanced mechanics in action. With 165 components, it is a perfect combination of technical excellence and visual magic in a pink or white-gold case. Cartier
Cartier
Rotonde De Cartier Double Tourbillon Mystery Watch
Over 100 years after Cartier first introduced the 'Mysterious Watch' concept in 1912, it unveiled a revamped version of the idea at the SIHH 2013. The Rotonde De Cartier Double Tourbillon Mystery watch is based on the 9454MC movement, which is housed in an exquisite 45mm platinum case. The novel tourbillon is a 'double' tourbillon, which means that every five minutes, it rotates on a 'mysterious' sapphire disc that appears invisible. This tourbillon is contained in a cage that also rotates once in every 60 seconds, making it a unique seconds indicator. 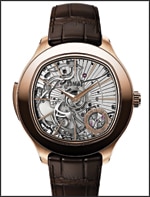 Events to look forward to in September