Fast cars, bikes and boats. Racing tidbits from around the world.

Once the driver with the most F1 wins under his belt, Alain Prost is every bit the legend. Between 1980 and 1993, the French master landed a phenomenal 51 victories, including 33 pole positions, 41 best laps and over a 100 podium finishes. His record has since been bettered only by Michael Schumacher, but for many, Prost is still the ultimate driver-calm and unflappable. He returns this year as TAG Heuer's brand ambassador for the watch brand's 150th anniversary celebrations. As a part of TAG's 'Mastering Speed for 150 Years', Prost will be joining other racing hotshots like Lewis Hamilton, and Jensen Button in promoting the brand through the year. All through the rest of the coming year, Prost along with the Vodafone McLaren Mercedes stars and a bunch of Audi drivers will be appearing for TAG's various promotional events. When he's not posing for the cameras, Prost will be indulging his love for racing by participating in the Andros Trophy. 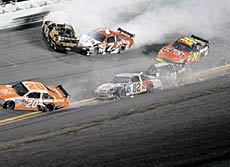 NASCARSpeed thrillsAs far as NASCAR races go, the Daytona 500 is always the one to watch out for with its thrills, spills and epic wrecks. Well, now if NASCAR's drivers are to be believed, this re-paved track can do even better. And by better we mean higher speeds-over 320 kmph; cars in tighter packs-three cars abreast; and of course, more pile-ups. According to the defending winner of the Daytona 500 Jamie McMurray, this will make the race a more rivetting one. The current top-speed is at 318 kmph, but with a better grip that will now change. Next season is going to be good!

EQUESTRIANA close shaveBoasting of the US's second oldest track, the Maryland Jockey Club is going through something of a purple-patch right now. It is home to the famous Pimlico race-track, which hosts the Preakness Stakes, one of the Triple Crown of equestrian races in the world every year. After a long period of uncertainty when it seemed that the race-track, along with Laurel Park, would be shut down forever, the club's managers along with the Maryland Thoroughbred Horsemen's Association and the Maryland Horsebreeder's Association have decided not to give over the historic premises for a housing strip and instead conduct the usual 146 days of racing through the year. Good news for horseracing enthusiasts the world over.

There's a lot happening behind the scenes of F1, with teams changing drivers, changing management and doing everything possible to make the next season a success. And with the sensational 2010 season behind us, the upcoming one has a pretty tough job on its hands. One interesting bit of news was that of a move that didn't happen. After a moderate year with Lotus Renault, the Russian ace driver Vitaly Petrov was linked with a move to other teams. However, he's decided to stay on with Renault and concentrate on getting a good rapport going with teammate Robert Kubica. Widely tipped to be a great driver, 2010 was Petrov's debut year. So while the likes of Sebastian Vettel and Fernando Alonso were burning up the tracks, Petrov was having a quiet year, learning the nuances of the world's premier motorsport. He reckons that 2011 will be the year when he fulfils his potential and performs to the best of his abilities. Renault must be hoping so too.

Paris moves in
As if MotoGP wasn't drowning in glamour girls and celebrities! News has just come in that the über-socialite and heiress to the Hilton empire, Paris Hilton, has decided to own a MotoGP team of her own. It won't be all hers though, as she will go into a co-ownership deal with By Queroseno Racing. The team will be called SuperMartxé VIP by Paris Hilton and it will be competing for the 2011 125cc World Championship.

Why did I marry you anyway?