To flee Delhi for Jodhpur is to discover a land of forts and royals. And for this reporter, an opportunity to test the new Volkswagen Passat. To flee Delhi for Jodhpur is to discover a land of forts and royals. And for this reporter, an opportunity to test the new Volkswagen Passat.

Sometimes, the only excuse you need to leave Delhi is a good car and the Volkswagen Passat is a very good car. So, early one November morning, the car was given its fill of premium Diesel as we set out for Jodhpur, a good 500 kilometres away on some of India’s most crowded highways. Ergo, the Passat zipped through the toll gates at Manesar outside Delhi and into Rajasthan before the sun was up.

The checklist for a long drive usually includes copious amounts of water, tons of tissue paper, some food and a lot of music. In this case, there was one other addition. 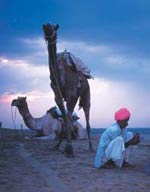 A driver with an accelerator fixation. I was determined to get to our destination of Bal Samand quickly, which is beside the main reservoir of the city where the erstwhile royal stables had been converted into a hotel. I didn’t care what we ate for lunch, but I was determined to eat lunch at the hotel.

One of the older traditions of a highway drive in India is to buy a chilled bottle of local beer and drink it along the drive. I made do with Diet Coke. Don’t get me wrong, I’m as hard a drinker as they come. But drinking and driving is not only dangerous, you really can’t enjoy driving when you’re drunk.

The Passat is everything you could want in a car of its price range. Though it’s an excellent long-distance cruiser, charging down towards Jaipur on National Highway (NH) 8, one of the most crowded stretches of road in the country, you really don’t get to see the car’s true colours. But once you are on the Jaipur bypass and enter the fantastic Jaipur-Kishangarh expressway, the Passat’s two-litre turbo-diesel engine kicks in. The six-lane expressway is by far one of the best stretches of tarmac in the country. The Passat’s engine responded excellently to even a dab of the foot, and well, we were not doing road-legal speeds.

The problem with roads in India, however, is that they are much like narcotics. After the high there is always a comedown. And the road from Kishangarh through Ajmer is horrible. This is mainly because that until that point NH8 is part of the Golden Quadrilateral (GQ), but the GQ peels off on NH79 towards Udaipur. While you could finish the 100-odd kilometres before Kishangarh in under an hour, it takes the same amount of time to negotiate the crowded two-lane single-carriageway past Ajmer. Thankfully, aided again by the Passat’s engine, we were past the mess and soon on NH112, a new highway built to shorten the distance to Jodhpur. Bal Samand was bliss. After setting off from Delhi at 5.45 in the morning, we had reached Bal Samand by two in the afternoon. The rooms are at the former royal stables. Located at the outskirts of the city, there is no hustle and bustle and you can walk through the landscaped gardens to the main Haveli beside the reservoir in peace.

While in Jodhpur, though, we decided to head to the Mehran Terrace restaurant at the top of Mehrangarh Fort for dinner. Thankfully, you could find regular strength beer, and while dinner was pricey, the view from the top of the fort is stunning.

After one night in Jodhpur, with a bit of shopping on the side, it was decided to spend a night at Khimsar Fort. Khimsar is around 90 minutes down NH65 north of Jodhpur, but unlike the city proper this feels like being in the middle of a desert. The Khimsar royal family has really updated the old fort and the rooms are stunning.  Surprisingly, Khimsar isn’t so much on the Indian tourist plan, but it is a hit with foreigners.

But a three-night holiday had been planned at three different destinations, and the third port of call was another WelcomHeritage property, this time another property of Khimsar, their Sand Dunes Village Hotel. Leaving the Passat at the fort, we were bundled into a Mahindra Jeep and driven for about 30 minutes to the Dunes, with a camel ride thrown in at the end.

We spent an hour driving through the desert and shrub, looking for the elusive Blackbuck. Just to shoot them with a camera not a gun as one famous Bollywood actor is alleged to have done.

If you have time, then you could take a day trip to Bikaner, around three-hours drive from Khimsar. But we had to head back to the city. This time using a different route—on the NH65 till Nagaur and then down via NH89 through Pushkar and into Ajmer. A lunch-time pit-stop was made at the temple city of Pushkar, where it seems the entire city has been converted into a giant shopping mall, with street-sellers selling everything. However, the drive back to Delhi was nowhere as pleasant as the drive out.

The traffic was horrible even though the car smoothened it all out. But that is a small price to pay for a great driving holiday, and as we had been abnormally lucky so far, we deserved some bad traffic.

Two to the floor