In a Man's World

Possession is the strongest desire mankind has ever known; when it's passive it's called inheritance, when it's active its called war. The reason is simple: what you possess stands as an extension of your character and as a validation of your strength.

It is interesting how man's association with his assets starts out as a material necessity, grows into an emotional union and ends up as an integral aspect of his persona. Well, men will be men and they'll always take pride in their posessions, however bizarre they may be.

To find out what the alpha-men of today are showing off, we caught up with a masterchef, a decor lover, a fashion forward debonair and a cricket star. Let's talk accessories and a basic love of things .

ALSO READ:Fashion trends for men in 2012

About Him:
What's a Stanford graduate doing in Nashik? Turning it into Tuscany and putting India on the world's wine map. His passion for wine that got him to reclaim his family land and set up a tiled-roof castle overlooking a sprawling vineyard. The man who knows his rosé from his cabernet has now turned a predominantly Scotch-drinking nation into a wine loving one.

"THERE SHOULD BE A WINE FOR EVERY OCCASION AND MOOD. KEEP A SPARKLING WINE HANDY FOR A CELEBRATION AND A SMOOTH FULL-BODIED WINE TO GET THRUOGH DULL EVENINGS"

Accessories of Life:
Given the humidity, my cellar features a selection of red wines which are best served chilled. The Kim Crawford pinot noir 2010 is a crowd pleaser. Even though it is refined, light and slides down smoothly, its freshness lingers till much later. It's just the thing to get past that midweek low. The Ruffino Reserva Ducale 2007 will transport you to hilly wine estates of Tuscany. It pairs well with pizzas and lamb chops. Finally, the Cono Sur Reserve cabernet sauvignon 2010 is rich and full-bodied and is perfect for an evening with loved ones. About Him:
If things went as planned, Naveen Ansal would have been a gentleman farmer, managing his ancestral land in Ferozepur. Fate had other plans for the salt-and-pepper haired entrepreneur who went on to marry Raseel Gujral and developed a pasion for design and decor.

"THE HOME ACCESSORIES TO WATCH OUT ARE HERITAGE PIECES LIKE OTTOMANS, TRUNKS AND SCREENS THAT HAVE A CONTEMPORARY FINISHING"

Accessories of Life:
Vintage furniture stands for depth and substance. Instead of stocking up your home-space with generic pieces, one should look for meaning. My favourite is a gothic styled chair that's set in highgloss mocha finish and has a relief carving that gives it a retro-modern look. One can also change the mood of the furniture. I throw in bright and colourful cushions for a feeling of freshness and suede ones with Mughal motifs for a regal feel. The season is about juxtaposing modern antique pieces like chest of drawers against funky ones such as egg-shaped chairs. 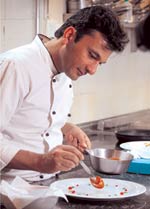 About Him:
He could have been another expat chef cooking chicken tikka masala . But, hunched over in New York's celebrated kitchens, he chose to be different. The Michelinstarred chef unleashes onto his gourmet entrées, the earthy warmth of his grandmother's Punjabi rasoi and has redefined Indian food in the Big Apple.

"IN A MAN'S KITCHEN, THERE'S NOTHING QUITE AS SEXY AS THE FLAVOUR OF FRESHLY GROUND SPICES. SO, BRING IN ZEST AND FRESHNESS INTO YOUR FOOD WITH A GOOD SPICE GRINDER"

Accessories of Life:
Two must-haves in a man's kitchen are a spice-grinder and a cast-iron skillet. The grinder intensifies the flavours of spices, brings out their essential oils. Crushing fresh beans in the morning is a great way to kick start your day. I found a skillet in my ancestral kitchen and have been in love with it ever since. It's a native and healthy way of cooking, as it releases small amounts of iron into your food and soaks up excess oil. It is especially recommended for long-cooking stews, braised dishes and any power breakfast with eggs. About Him:
Running his fingers through his outlandish golden locks and giving his almost patented smirk, Rohit Bal was branded the 'bad boy' of Indian fashion in the 90s. Today, he's a seasoned star who's been at the fore of Indian fashion's evolution, seeing it grow from back lane export houses to international Fashion Weeks.

"INVEST IN LIMITED QUALITY ACCESSORIES THAT WILL STAY WITH YOU FOR THE LONG HAUL. A CHUNKY WATCH, A HAND-WOVEN PANAMA STRAW HAT AND A FINE LEATHER BAG ARE A MUST FOR ANY URBANE MAN"

Accesssories of Life:
In 1986, I splurged on a Breitling aviator watch in Brussels on one of my initial international assignments. What was costly style then, is priceless heritage and heirloom now. Another equally important accessory is a bag that weathers gracefully. I have been using a Louis Vuitton self-monogrammed shoulder bag for about 20 years now. It doesn't scream the brand's logo, and its understated charm draws compliments even today. Finally, in a tropical country like India, a Panama hat is a stylish and sensible accessory. It's easy to wear and most men look good in it.
TweetYoutube
Tags: Accessories | men fashion | fashion | fashion designer | masterchef | Micheline star | restaurant | vineyard | Naveen Ansal | Rohit Bal | Vikas Khanna