Powerful kings and rulers of France made it their second home as did celebrated painters. The twin towns of Moretsur-Loing and Fontainebleau, surrounded by forests, rivers, palaces and rich in history, are gems waiting to be discovered, barely an hour away from the centre of Paris. The Notre Dame church: The medieval church was consecrated by Becket
Having experienced Paris by day and night and explored most of its “must-see” spots on two separate trips, I decided to check out a few places highly recommended by friends and family, on a more recent visit to the fashion capital of Europe. Well, I will be honest.

The main reason I chose to visit Fontainebleau and Moret was because I had a place to stay. A cousin teaches at INSEAD, the famous B-school in Fontainebleau, and so staying at his luxurious three-storied villa on the banks of the Loing was a big draw. Getting to either of these two towns is not tough.

One can either hire a car or do what I did—take a train (the regular train service as opposed to the RER or the metro). Fontainebleau and Moret are just a couple of stations apart on the same line from Gare de Lyon station in Paris, and in just under an hour, I had reached the quiet town of Moretsur-Loing. The station, however, is in Moret Les Sablons, an adjoining village. The welcome couldn’t have been better really.

The royal retreat: The entrance to Palace Fontainebleau
Clean wide roads, lush green forests, a river flowing past homes, medieval stone gates, royal palaces and works of art strewn almost carelessly all over the place—this is where (I was told) lovers escape to, when they are tired of the tourist onslaught in Paris. This is not a holiday for the busy tourist, who would love to do or see five new things every day. This is a trip for those who love walks in a forest or love to sit for hours on the river bank, take a boat ride or simply walk into a quaint tavern for a drink.

Fontainebleau is just 55 km southeast from the centre of Paris. Together with the neighbouring commune of Avon and three other smaller communes, Fontainebleau forms an urban area of 36,713 inhabitants. One can well imagine then, how quiet and quaint this place is.

The fontainebleau forest: On our first morning in Moret, after breakfast, we drove to the famed forest of Fontainebleau, a favourite weekend getaway for Parisians.What struck me, apart from the obvious beauty of the forest, was how clean it had been kept. A herd of deer hung around close to us, their ears pricked in case we decided to chase them, but one could see they were used to humans, as they happily grazed within a few hundred feet of us. The forest is also a treasure trove for mushrooms, and there are quite a few locals who will guide you (if you so desire) and help you pick up the edible varieties from here.

Lush greens: A walk through the Fontainebleau forest
Protected by France’s Office National des Forêts and recognised as a national park, the forest has a valuable population of birds, mammals and butterflies. It is a former royal hunting park often visited by walkers and horse riders. It also has a curious collection of giant rocks and is popular among climbers. Don’t be surprised to see youngsters undergoing a rock climbing test here as you walk along a natural pathway. The Royal Palace: The piece de resistance in the town, of course, is the historic Château de Fontainebleau—an abode of several kings and the final retreat of Napolean Bonaparte.

Our host informed us that every year over 300,000 people visit the Château (the palace) and about 11 million people visit the forest. Now that’s quite a number, considering the local populace of just over 36,000. The Palace of Fontainebleau as the Château is known, is one of the largest French royal châteaux. The palace, as it stands today, is the work of many French monarchs, building on a structure of Francis I. The palace introduced to France the Italian Mannerist style in interior decoration and gardens. It was from Fontainebleau that Napoleon bade farewell to his Old Guard and went into exile in 1814.

The rocky outcrop: Indulge in your passion for rock climbing
The picturesque medieval town of Moret-sur-Loing, established in the Gallo Roman era, was a favourite haunt of many kings, amongst them Philippe Auguste and Saint Louis in the 13th century and subsequently Henry IV. The two impressive fortified gateways that lead to the town are over 400 years old and they, along with the walls and 20 towers, remind one of the town’s role in defending the Kingdom of France from the supporters of the Duke of Burgundy.

The clean charm: The quaint streets of Fontainebleau
An artist’s paradise: Moret today is best remembered, though, as home to the celebrated artist Alfred Sisley. Born in Paris to English parents, Sisley arrived in Moret in 1889 and lived here till his death. Bowled over by the river landscape, the medieval town and its surroundings,this famous impressionist painted over 400 scenes but, sadly, it was only after his death that he became famous for his work.

Moret by the river: Loing flows peacefully by the town
The notre dame: The beautiful church of Notre Dame, which towers above the town, was consecrated by Thomas Becket. Built between the 12th and 15th century, with all the beauty and splendour of the gothic cathedrals, it is well worth a visit. My tip would be to spend at least an hour exploring the church to admire the stained-glass work before heading for the pub about five minutes away, for a drink.

Sisley depiction of the scene
The arched gateways: The single main street of Moret is a plethora of colourful shops and half-timbered buildings, with a fortified gateway at either end. Moret is in a privileged position on the edge of the forest of Fontainebleau and the banks of the River Loing. Every Saturday night from mid-June to the end of September, there is a Son et Lumiere festival, which evokes the atmosphere and happenings of bygone days. 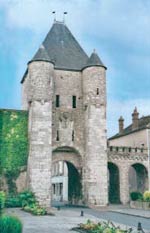 Arched entrance: One of the gateways defending Moret
The museums: If you like museums, then check out the Conservatoire du Velo (the bicycle academy with a variety of models used by our ancestors) and the Musee du Sucre d�fOrge des Religieuses, which is the museum where the nuns made their barley sugar. If it�fs just an idle day that you want to spend here, then do take a boat ride along the Loing and recapture the scenes, which appeared on the canvas of so many impressionist painters like Sisley.

How to get there: All major airlines fly to Charles de Gaulle International Airport in Paris. Fontainebleau and Moret stations are both roughly an hour by train from the centre of Paris (Gare de Lyon).

Where to stay: While one can stay in Paris and drive down to Fontainebleau and Moret for a day tour, a weekend surrounded by the forest and the river is sheer bliss. One can stay with the locals here on a B&B basis or book into one of the few luxury hotels. Our tip would be the Inter Hotel de la Dague Fontainebleau on 5 Grande-Rue Barbizon. This old manor caters to the needs of the discerning traveller and is conveniently located just a few minutes drive from Fontainebleau. The Orly Airport is 35 km away. It is not outlandishly expensive either, with a deluxe room for a couple costing around e100 per night.

Frozen on the Links