Events taking place in the place

We've lifted off the streets and taken to the skies. It's only natural then, that attention shifts to airborne interiors.

Sky's the limit
We've lifted off the streets and taken to the skies. It's only natural then, that attention shifts to airborne interiors.

Bespoke has taken off the runway and is flying high amidst the clouds, quite literally. With an increasing population of high net-worth individuals, bespoke aircraft interiors is the newest money spinner.

So once you've donned the perfect suit and cruised in your customised set of wheels, climb aboard your very own castle in the air. Gourmet kitchens, custom bars , flatscreen private theatres, customised gymnasiums, multiple levels of living space and much more; your aircraft is no less than your home on the ground. With exclusivity being the name of the game, private jetowners have given impetus to an entire industry for aircraft interiors, and all the players in the market are giving it their best shot.

With brands ranging from Versace and BMW to Lufthansa, all the competition has upped the ante, and the sky is the limit. Just like your home reflects your personal taste and style, now, so does your private jet. It is definitely the ultimate status symbol, and this is one trend that is here to stay. Customise your wings to stay in the game!

The warhol pad
A five-storey house on the Upper East Side designed by the architect of The Plaza Hotel might not draw too much attention. But mention the fact that it's previous owner was Andy Warhol and the buyers come pouring in. On the market for $4.3 million, this is where the artist churned out his earlier works including the Campbell soup cans. Let the bidding war begin!

6 cadogan place
There's a spanking new address in London town! Casa Forma, known for their architecture and design statement, have launched a brand new high-end property in Knightsbridge. The property, titled Flat 6 Cadogan Place has been resurrected in place of a classic 1980's style building and is today a chic addition to the area's landscape. A single triple-lateral apartment, it boasts three bedrooms with en-suite baths, a study, cloakroom, kitchen and laundry room, dining room and lounge; all accessed by a private key -directed lift. The front facing balconies offer a sprawling view of Cadogan Gardens, while the interiors are done up in Ralph Lauren furniture. All for 7 million pounds!

Cruisin' together
It's not about speed, and it's not for novices. The new Riva Iseo is a work of art. Launched in time for the summer of 2011, this 27-foot-long day cruiser is the perfect toy for nautical aficionados who enjoy a relaxed sailing experience out at sea. The new vessel is in keeping with the brand's iconic and longstanding heritage. The first in the Riva range to sport a hybrid engine with Zero Emission Mode cruising, this yacht is also the first of its kind to be equipped with information, entertainment and GPS facilities. Developed specifically for the vessel by Apple iPad, these facilities include an owner's manual, weather forecasting, live radio streaming, customised iTunes playlists, a top notch audio system and several applications for browsing. So even when you're sailing on the high seas, you're just as connected as those back on dry land. With beautiful mahogany crafting throughout the body of the boat, this new creation is as functional as it is beautiful, and makes for a perfect day at sea.

Fleet Foxes, Helplessness Blues The Seattle folk stars are back after with their triumphant second album with richer sounds and introspective lyrics.

TV On The Radio, Nine Types of Light New York's finest band relocated to LA and came up with an album full of songs of love and lust set to some great music.

Charlie Haden Quartet West, Sophisticated Ladies The legendary bass player is back with his smooth band of veterans and stars like Norah Jones and Diana Krall for songs that celebrate the feminine.

Various, Delta Swamp Rock A compilation of Southern rock classics from the 60's and 70's, this one's bound to hook and impress all Classic Rock lovers.

Beastie Boys, Hot Sauce Committee Part Two The hellraising Beasties are back with a new album that mines all their best sounds. 1. Glastonbury festival: Be sure to make it to Glastonbury in the UK from June 22 to 26, and enjoy a spectacular line-up of musicians from all over the world. Covering all genres of music and performances ranging from the biggest acts in the industry to alternative sounds, this is the biggest music event of the year.
Website: www.glastonburyfestivals.co.uk

2. Shimla summer festival: Come June, and the state of Himachal transforms into a hub of activity and festivities as the locals of the region welcome summer to their state. Shimla is decked out in an array of colourful tents and stalls, as tourists from all over the country flock to witness the rich show of Himachali culture and heritage. To be held from June 2 to 7. Venture out to enjoy the celebrations!
Website: www.festivalsofindia.com

3. Wimbledon: It's that time of the year again, and the oldest tennis tournament in the world returns to inject fervour into its hometown in London for the duration of the championship. Will Federer rule again? Or do we see a new legend this year? check out the action from 20 June to 3 July.
Website: www.wimbledon.com

4. Champakulam Moolam boat race: One of the oldest and most popular boat races in India, this race is held on the banks of the Pampa river in Kerela. Of all the different categories, the snake boat race is the most enthralling. With 100 men per boat, the vessels tear down the stretch of river with adrenaline pumping. Starts on June 16.
Website: www.kerelaholidays.com

Bid on bubbly
They say 'Old is Gold', and taking this saying to a whole new level is the upcoming auction of two 200-year-old champagne bottles that were recenty discovered at a shipwreck in the Baltic Sea. The auction will take place in Mariehamn, Finland, on June 3, with one of the bottles being auctioned by Veuve-Clicquot and the other by Juglar. The wreckage where the bottles were salvaged is believed to have sunk around the late 1820s, making these the oldest bottles of champagnes to have ever gone under the hammer. Make your bid! 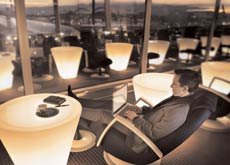 Lounge easy
The next time you're planning your travel itinerary, be sure to plot a stop at the Helsinki-Vantaa airport and pop in to the Finnair Lounge to get a taste of the World's Best Airport Lounge. Making its mark over 600 competing entries, the prize was awarded after a unanimous vote by over 40,000 frequent fliers. Here's what you can expect: individual shower rooms, a great buffet spread, a well stocked Via Bar, LED televisions scattered around the relaxation areas, and salon and spa services to rejuvenate you between flights. In addition, free wi fi, Apple iMac work stations, and facilities such as wireless mobile recharging ensure you're connected throughout your wait. The first non-American lounge to win this award, it's well worth the hype. 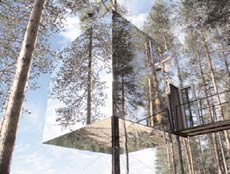 Lofty ambitions: The treehotel in Sweden
For those who like to be connected with nature, it doesn't get any better than this. The Treehotel in Sweden is located just about 60 km south of the Arctic Circle, amidst the thickly wooded Boreal Forest and is designed to mirror its pristine surroundings, quite literally. There are currently four units completed, each oneof which is designed by a different architect to ensure originality. The structures are suspended four to six metres off the ground and each unit sports a unique theme. So whether you're perched among the trees in a structure resembling a bird's nest, or better yet a mirror-walled cube which reflects the sky and greenery in its walls, be prepared to 'feel free in a tree': the motto of the establishment. Be sure to check it out!

Sounds like you know about the piano
Those ethereal black and white ivories have been giving us untold musical pleasures fora very long time.

1. The earliest ancestors of the modern piano were hammered dulcimers of the Middle Ages which worked on the same principle of struck strings.

2. Although musicians tried to make a keyboard-based instrument-which resulted in things like the clavichord and the harpsichord--it was only in 17th century Italy that the first modern piano was created by Bartolomeo Cristofori for the Medicis. Only three of these have survived.

3. The Viennese school of 18th century craftsmen like Johann Stein and Nannette Streicher further refined the piano. Mozart wrote most of his concertos for these Viennese pianos.

4. Although the modern piano can be broadly divided into the Grand Piano and the Upright Piano, there are further subdivisions in the latter such as the Spinet, Console and Studio.

5. Rising prosperity in 19th and 20th century Europe and America saw the piano becoming a favourite household instrument. This declined with the development of the phonograph record.

Liz's sparkle
After reaching an agreement with Elizabeth Taylor's family, Christie's will be auctioning the legendary movie star's personal jewellery collection later this spring. Estimated at a roughly $150 million, most of the pieces in the collection were gifts to Taylor from her admiring male stars, including her Cleopatra co-star Richard Burton. Part of the proceeds will go towards the AIDS foundation set up by her, so dish out the greens and sparkle for a cause.

Left vs right
For those who believe that being left-handed is just a motor preference established in the developing stages, think again. In a recent study by Dr Carolyn Choudhary of Queen Margaret University, the research concluded that left-handed people are more affected by fear, and have double the chances of Post Traumatic Stress Disorder as opposed to their right-handed counterparts. Scientists are using this theory to understand how the brain deals with fear.