Downturn, what downturn? Sanjay Kapoor, the managing director of genesis luxury, is in high spirits. Just make sure there’s a gym nearby.

Sanjay Kapoor strides into La Piazza, the Italian restaurant in the Hyatt Regency Delhi, with a beaming smile and his hand outstretched. “Hello! I just love this place, great food, I come here all the time. Eating out in Delhi is so much better in the winter. Are you hungry? How are you?”

He’s always like this, bursting with enthusiasm. Every time we’ve met before, it’s been at wine and nibbles events at the Emporio mall in Delhi, that cavernous citadel of luxury goods, where Kapoor’s brands dominate—Aigner, Bottega Venetta, Satya Paul, Paul Smith, Kenzo, Just Cavalli, Rivet and Canali. There’s no end of launches and promotions. And every time, he’s the same way—beaming, effusive, interested in everyone he meets. He seems utterly unjaded.

“I have zest, it’s true. I don’t wake up thinking ‘not another day of work’. I wake up with springs in my feet!”

Kapoor’s brio is incongruous in these depressed times, particularly for a key player in the luxury industry. But, global downturn or not, his springs haven’t lost their bounce. Today, he was in the office in Gurgaon at 9 a.m., then off in his Mercedes at 4 p.m., BlackBerry Curve in hand, to beat the traffic into South Delhi. A hearty work out at the Hyatt Gym and here he is devouring a plate of rock melon and Parma ham.

“It’s the gym,” he says. “I’m big on gym. I used to play a lot of squash till about five years ago, when I bust my left knee and both ankles. All in nine months. It was just one of those things. But the thing about squash is, you need to book a time slot. That’s hard when you run your own business. Treadmills are always open!”

Kapoor is an evangelist for exercise. He credits the gym with his perky demeanour and an ability to beat jet lag on business trips. “Trust me. I must have travelled 125 days in 2008—to Milan, Paris, London, Frankfurt, the US. All you need to do is get on a treadmill as soon as you land—tire out your body as well as your mind. You’ll be right as rain the next day!”

There’s no need to be downcast about the downturn, he says, even in the luxe business. “The base is so small, it’s not affected,” he says. “This is a new business in India. No one knows how much it’s going to slow down, there’s nothing to compare it to. But the International Herald Tribune is holding its luxury conference in Delhi this year [in March], so that’s a big deal for India. We might not deserve it right now, but it shows the potential they see here.”

Kapoor saw this potential before most. But even so, he fell into the luxury business somewhat by accident. Having grown up in Singapore, then Delhi, he went to the US to do the obligatory MBA. But he had no intention of staying. “In the US, no matter what you say, you’re still an outsider. Here, you have family, networking. The people are so much warmer here.”

The goal was always to run his own business in India, so when he was hired by Citibank in New York, he immediately requested a transfer to Singapore. And over two years there, he jumped again. “I developed a business with a colleague, Jyoti Naruda, so we quit our jobs thinking we’d be garment exporters, selling across Europe. But we got no business! Then someone gave us an order for neck ties, and that was it. There was no looking back.” 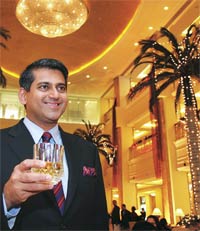 He loves his luxury, as expected, and he’ll happily rhapsodise about the first suit he ever owned—a Canali. But luxury, for Kapoor, isn’t only about a high-end experience. He mixes it up—he’s here today in Etro shoes and a Zara shirt. “It’s about buying the best in life, not the most. You get to a point where you buy less but you buy higher quality.” And quality of life is loosely defined. It could be the simplest of things like a cup of tea in the morning. “Every morning when I wake up, I press a bell, prop myself up with all my favourite newspapers and have two or three cups,” he says. “You might be in the fanciest hotels but you don’t get good old fashioned masala chai. That’s luxury to me, it’s something I really miss.”

Home for Kapoor is a fourbedroom apartment in Santiniketan, Delhi, not far from his parents in Safdarjung. And it’s just him and his wife—no kids, no pets. So, he’s busy filling his home with art, a recent passion, in the scheme of things. “I caught the art bug five years ago,” he says. “The one that got me into it was a painting of Baby Krishna, by Alex Kurses, an Englishman who lives in south India. I paid Rs 8,000.” He also fills his home with guests and dinner parties. “People come over all the time. My contribution is just to make sure the bar is well-stocked!”

That said, he’s not much of a drinker. Just mineral water tonight. Beer’s too filling and red wine gives him headaches. “I’m high on single malts, now, but only occasionally,” he says. When the food arrives, however, his eyes light up. He’s opted for the rainbow trout, foil-wrapped so all the juices are soaked in. I’m having the sole, grilled in butter and capers. The food here is perfectly serviceable, more of a comfort than an event. But the ambience is pleasant—not too stiff, a bit of bustle, the reassuring clatter and chatter in the background. Restaurants are something that the Hyatt in Delhi do particularly well.

Kapoor’s big on comfort. His perfect vacation, for instance, doesn’t involve adrenalin or adventure—he saves his intensity for the workplace. He likes to go on cruises. “I’ve been on six of them over the last six years!” he says. “I’ve done the Mediterranean, the Caribbean, the Baltic, Alaska… Can you imagine cruising through icebergs? Exotic! To me a holiday is about a short break—four days, seven days. And on a cruise, you unpack once. It’s not like you’re standing in queues for airports and hotels and blah blah blah. You see some exotic locations, there’s a movie theatre, you can wander off on your own if you want, there’s a gym…”

Of course, the gym. Some things in Kapoor’s life remain constant, and even on a cruise, Kapoor stays connected— his BlackBerry’s on, he can still receive e-mails. It turns out that work and play aren’t quite so distinct as they might seem. “I need that mental stimulation wherever I am. Even out among the polar bears and ice floes!”