For a taste of China, in more ways than one, Taipei is just the ticket. 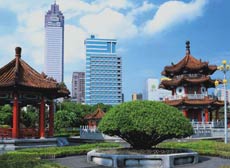 For a taste of China, in more ways than one, Taipei is just the ticket.

The first thing you need to know about Taiwan is that they make a lot of computers, in fact 95 per cent of the world’s laptops are made there. If you use a computer of any type, some part of it, maybe all of it, has come from Taiwan. Taiwan is technically the Republic of China, a country created when the Chinese Nationalist leader Chiang Kai-shek fled from the maurauding armies of the Chinese Communists led by Mao Tse-tung. This means that Taiwan, or to give its old Portuguese name Formosa, is not recognised by many countries and China considers it a “rebel province”, though there has been a thawing of ties over the last few years, primarily because Taiwan is the largest investor in China.

Taipei, located near the northern tip of the island, is the country’s capital. The city of Taipei has two airports, but chances are that you will land at the new airport far out in the countryside and it takes about an hour to head into town. The city itself is very typically east Asian with insane traffic jams, the usual difficulties of communication if you don’t speak Chinese and the fondness of people to drink. That said, Taipei is not a city that can be classified as a “party town”—in fact, most bars and restaurants close down rather early even during the city’s mega-Computex exhibition. And that is another thing, try and avoid ‘Computex’ unless you are really into computers—the town is brimming with people from all over the world and rates shoot through the roof.

Where to Stay
I stayed at the Grand Hyatt, your typical business five-star, bang in the middle of the convention district and downtown area. Taipei has quite a few good hotels, including The Sherwood, preferred by celebrities. Room rates at top hotels range between 5,000 and 15,000 NTD (Rs 7,000-21,000), depending on the time of year.

Getting Around
Taxis are rather reasonable, a ride to the business district in a cab will cost around 250 NTD (Rs 400) at the most. There is also a subway, but good luck getting English directions. Best way to not get lost is to have a phone with Google Maps.

Eating
Eating out in Taipei is relatively cheap, but if you’re adventurous, it’s a fantastic foodie city. Taipei puts Manhattan to shame for Chinese food. There are several high-end restaurants in the Taipei 101 Mall. Be warned, you should know how to use chopsticks. Also, if you are vegetarian, there are options, just be careful while ordering and specify that you are vegetarian. Irodiri: A great Japanese restaurant in the Grand Hyatt itself. Whenever you eat sushi outside India, you wonder how Indian restaurants can get away serving anemic little rolls. 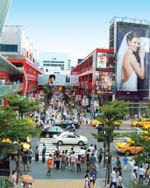 Crystal Spoon: At the Taipei 101, these guys make a Thai-Cantonese fusion, which, I must say, tastes more like typical Delhi-style Chinjabi food. But really interesting food. China White: Yes, the name is taken after the premium grade of a drug, but China White is again ‘fusion’ (fusion food is the current trend in Taiwan) where there was mixing and matching of northern Chinese and Western food, you know a great cut of tenderloin with some traditional sauces. Yum. Also, these guys make great cheesecake and martinis. Din Tai Fung: This chain of restaurants will please the cockles of a person, who loves crowded ‘tiffin’ rooms. They specialise in Dim-Suns and their simple pork dumpling is extremely tasty, but you can’t argue that the whole chicken in a soup looks that appetising. I ended up trying 7-8 different types of dumplings, some great hits and some near-misses, but had a blast.

Drinking
The local beer is imaginatively called ‘Taiwan Beer’, but it really tastes nice. The Taiwanese and Indians share a love of Scotch and virtually every bar in town has a Scotch line-up that is eye-popping, the higher-end places even have the new Glenmorangie Cignet, which is spectacular. It’s expensive, though, a beer at a decent place costs between 150 and 250 NTD (Rs 250-400) plus service. The downtown area has a lot of clubs—some like ‘Studio 19’ are younger places and ‘Brown Sugar’ across the road is a older place with more Blues music. The Far East—China, Hong Kong, Taipei all have an obsession with Irish clubs that seems borderline insane, even though I do like my pint of Guinness once in a while.

Company
OK, this is not Bangkok, nor is it quite a Hong Kong either. That said, if you visit the teeny-bopper clubs such as ‘Studio 19’ you will find a lot of young company. The problem chatting up someone is again a simple one of language skills, but young Taiwanese are trying to learn English, but don’t get fooled into buying too many drinks. Booze is expensive in Taiwan.

The Sights
Go to the top of Taipei 101—you can get up to the 91st floor, though that costs 400 NTD and you will get a helicopter-esque view of the metropolis. Also try to make time to see the Sun Yat Sen memorial and the city’s National Museum. Shopping, even in the night markets, isn’t that cheap vis-à-vis Shanghai or Hong Kong. In fact, if you want to go shopping, you would be better off making a day trip to Hong Kong, there are around 30 flights a day between the two cities. Getting There
Easy, if you can find a seat on China Airlines’ flight between Delhi and Taipei. Don’t take the connection via Singapore, it is much too long. Best go via Hong Kong.

Visa Requirements
Since we don’t officially recognise the ‘Republic of China’, you get a permit not a visa, but it’s no trouble—there is Cultural and Economic Office in New Delhi. Ask your travel agent for details.