Since the dawn of filmmaking, the documentary has held its own against its more glamorous sibling, the feature film. We take a look at three hard-hitting examples of the genre. 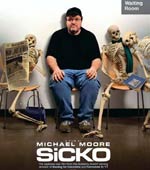 Michael Moore has perfected the art of attacking a can of worms with a flamethrower. Thus, to reveal the sorry state of US healthcare insurance, he takes a bunch of “sickos” to Cuba for their medical check-ups. This raised an uproar in the US and, yet, this is just one part of the movie. Moore does usually get his facts right, and the most glaring slap on the face of the establishment is that over 50 million Americans do not have access to health insurance.

He rightfully attacks soulless insurance companies that avoid making payments to those insured while stacking up profits and offering bonuses to employees who are successful in denying claims. Sicko is basically a litany of the horrors of excessive capitalism, and an argument for universal healthcare, which, in the US “exists” only in Guantanamo Bay.

When the Levees Broke Director Spike Lee is one of America’s foremost moviemakers. What many don’t know is that he’s a riveting documentary filmmaker as well.

Shot in the aftermath of the trail of destruction left by Hurricane Katrina, this is his tale of New Orleans, the city of the Mardi Gras and the ghost town riven asunder by natural fury and political neglect.

When The Levees Broke gives a balanced account of the events in New Orleans in the wake of Katrina. The riots, the helplessness of the affected, the apathy of the government, the heroic rescues are all brought to life through interviews. A fierce tribute to the spirit of the city, this movie is a must-watch. If you thought that the City of God was scary and relentless in its portrayal of the gang world, this documentary takes you into the heart of a very real darkness in the “most dangerous place on Earth”. This distinction has been given to Cité Soleil in Port-au-Prince by the UN and not without reason, as this brave documentary shows.

Watching this scary movie up close and personal, you are left wondering how Leth made this movie and did not get killed. But he survived, and this documentary (shot in cinema verite fashion) is another reminder of the importance of tough, uncompromising reportage.