We take a look at two gripping books—a work of fiction and another based on true events—which take us through the thrilling, though often horrifying, journey of life in a world where terror and terrorist attacks are everyday occurrences.

Mann ran down the corridor and burst into the Superintendent’s office. ‘We’re ready to leave.’ ‘How many are you taking?’ The Superintendent was on his feet. The place was buzzing with adrenalin. ‘Twenty.’ ‘Is now the best time?’ ‘Yes. We want to get there when the brothers are at work. I want to have a look around first.’ Mann’s heart hammered and his eyes burned with impatience, but he knew it had to be done right. He wanted to find Georgina alive.

Mann, Ng and Li parked outside the four-storey building situated three-quarters of the way along Herald Street, at the lower end of Sheung Wan, Western District, where the Fong family lived. Normally, it was a peaceful, dusty old street with a permanent smell of rotting vegetation and an aura of general decay. But this evening, there was a pink pre-storm light. The air was charged. Mann looked up and down the street. It had once been busy—thriving with shops—but now it was waiting to be knocked down. There were only a few shop fronts still in use. A few kids were tinkering with their mopeds at the far end of the street. An old tramp sat waiting for nightfall.

Excerpted from The Trophy Taker by Lee Weeks
Price: Rs 225 Pp: 498 (With permission from HarperCollins Publishers) 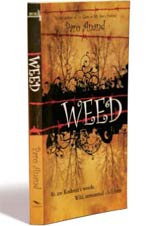 ’Tell me about the disappearance of your father. What happened? When did it happen? I want all the details. Leave nothing out. The more we know, the more we can help you.’ His voice is nasal, he glances at his colleagues as though they share something—a secret, I’m not allowed to be a part of. ‘Well,’ I begin, ‘it was a while ago, so I don’t know how much I remember…’ Ammi and I should have gone over this.

We should have got our story sorted out. Then it hits me. This is an interrogation— that’s why they only asked stupid, obvious questions when we were together and insisted that we were questioned separately for those that would make or break our case. But Ammi and I were so wrapped in our shame and misery, we forgot to get our story straight. And now it is too late. Too late. The man continues to peer at me, steadily over his spectacles. He’s waiting and I can’t play for time. So I plunge in, spinning the fabric of my lies. Trying not to remember that my mother is not a good liar.