Hruki Murakami's textured and often deeply-troubled protagonists dart in and out of pages that seek refuge in Kyoto, the city where the Japanese writer was born. An image from Akira Kurosawa's classic, Rashomon, persists. Key scenes in the film take place at Kyoto's crumbling gate or Rashomon, which inspires the name of the legendary film. My favourite travel writer, Pico Iyer, bases his novel, The Lady and the Monk entirely in Kyoto. I have these memories stylised in my head as we step out of the shinkansen or bullet train that brings me from Tokyo to Kyoto. Everything seems gentler, kinder, and slower here. This is Japan as imagined by thousands of tourists. A weeping willow, its back arched, swooning over the Kamo river, looks straight out of a black and white film and the ubiquitous shrine registers its presence in every neighbourhood and nook of Japan's ancient capital.

Kyoto is where you go when you long for nostalgia. The city cradles 17 Unesco World Heritage sites and has thousands of Buddhist temples and Shinto shrines dotting it. Kyoto is straddling two worlds and trembles only now and then, when the 21st century in all its madness gets too much. Women tightly wrapped in elegant, giltedged kimonos are seen gliding along its streets, almost a conscious anachronism. 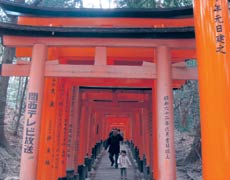 The Fushini Inari shrine
The temple trail in Kyoto can leave you exhausted, so choose well and stick with images that are most striking. The vermillion gates of the Fushimi Inari shrine beg to be entered but be prepared for a breathless climb as you go from one torii or gate to another. The fox is a regular fixture on its grounds and is believed to be a messenger of Inari or the god of rice. This Shinto shrine has thousands of such gates that have been donated by businessmen hoping to appease the gods. There are well-worn hiking trails behind the main structure but make sure you are fit to make the long, often arduous journey.

From the Inari shrine, we make our way to Sanjusangendo in the eastern part of the city. This temple is home to 1001 deities of Kannon, the goddess of mercy. Row after row of metal-sculpted shrines in almost militant form stand in the temple hall which, at 120m, is Japan's longest wooden structure. The Nijo Castle is another surprise.

Built in the early 17th century, the structure of the castle is made using cypress wood which is extremely delicate. The historic building is a quaint example of Japanese architecture of that period. The main structure is elegant and has intricate woodwork, scrolls and paintings adorning its walls. There are sliding doors along virtually all entrances to the castle and squeaky floors (meant to serve as an alarm against intruders) work like a charm even today. The impressive castle with strong walls, moats and towers, symbolises the military might of the that century.

Temple fatigue? The Kyoto International Manga museum hurls you right back in the 21st century. This futuristic museum draws on an important cultural aspect; the Japanese fascination with manga or comics. The wall of manga found here has thousands of free comics on display that you can read at will. Most are in Japanese but international versions can be found as well.

Temples, shrines and museums aside, it was the heart of Kyoto I was impatient to connect with and there is no better way to do this than by observing some of the oldest Japanese traditions and customs. Trade the storm in a tea cup for a meditative slur as tea becomes the leitmotif for much of what Japan once held precious. Tea has a strong social and cultural connect and Kyoto draws on this tradition to engage visitors keen on a tailormade experience.There are many tea houses where you can dress up in a kimono and perform the ceremony under the tutelage of a guide, all for a price. The tea ceremony showcases the splendour of Japanese rituals and is as much about the making and appreciating of fine tea as the final tasting of the concoction.

A traditional Japanese tea ceremony being performed
Most of the old tea houses are patronised by wealthy Japanese and it is difficult to gain access unless you are well connected or a regular. The chief attraction at these tea houses are the geikos or geishas, immortalised through celluloid and paperback. We travel to the Gion district for a geisha tour, our eager feet slapping noisily against the wet tarmac as we make our way down a narrow lane lined with plain looking wooden houses. The tea houses in this area were built before the 19th century drew to a close and are traditional structures, often with a single bamboo gate as the only entrance. It is a circus the geisha must be part of every day as she flits from her home or okiya to the ochaya or tea house where she plays the role of the highest paid entertainer in Japan. Fascinated tourists stand by at these times, camera in hand, waiting to click the moment a maiko or geiko appears.

The geisha are trained in traditional Japanese arts like music and dance and also learn to perform the tea ceremony with grace. Wealthy patrons pay what is termed 'incense money' (the time taken to burn through an incense stick) for the company of highly coveted geishas. An hour or two of entertainment can cost them upwards of $500.

A young maiko or geisha apprentice goes through years of rigorous training before she can be called a geisha. The appearance of the maiko evolves during this period, going from a heavily made up to a subtle, almost natural look as she matures into a geisha. Contrary to popular belief, a geisha is not a sex worker but an entertainer, and remains one of the few omnipresent symbols of old-world Japan. Maikos or apprentice geishas making their way from home to a tea house
Our guide, Peter Macintosh, an Australian who made Kyoto his home, walks us through Shijo-dori street which was used as a backdrop to film Memoirs of a Geisha. On one side, a bare cherry tree dips its head into a narrow water body. On the oher, a tea house awaits regular customers as the sun hides. Two apprentice geishas make their way from their home to a tea house.

Their feet are encased in wooden clogs or okobos, their kimonos understated with the narrow obi or belt tied behind. Their trademark white face masks all emotion, the vulnerable nape, the only part exposed. You can't help but stare at these doll-like women who epitomise pre-war Japan and the collective grace and culture of a nation. While their numbers have dwindled dramatically in the last century, Kyoto is perhaps one of the few places where they are still seen and treated with respect.

While modern society is pushing its way into the confines of Kyoto, the tourist can still hope to capture some of the elegance and romance of the past. The shiny new buildings and concrete do try and overshadow the historic neighbourhoods but Kyoto shrugs off the newness, choosing to, time and again reacquaint itself with the art and traditions it knows best and holds dearest.