Owning the latest gadgets has become a happy addiction with these men, all of whom are jet-setting executives.

Owning the latest gadgets has become a happy addiction with these men, all of whom are jet-setting executives.

Kris’ Gopalakrishnan
‘kris’ Gopalakrishnan Ceo And Md, Infosys Technologies
Gopalakrishnan spends close to 200 days a year on the road and has little competition when it comes to owning the latest gadgets. On the road, he makes sure he takes his nifty Sony Vaio notebook with him. He usually carries three mobile phones—the iPhone, Nokia E71 and Samsung 780. While the Windows Mobile-enabled Samsung handset is used when he travels to the US, he uses the iPhone as a combination of Internet browser and music player. He also carries a Nokia N95 when he is on holiday, primarily for its 5-megapixel camera.

Sandeep Dhar
Sandeep Dhar Md, Sapient India
This young-at-heart tech lover travels a lot and his must-have travel companions are his MacBook Pro, the Canon IXUS 800 IS camera and the Samsung SGHI780 phone. “I am a keen photographer and take lots of videos, too,” explains Dhar. He also carries his noise-cancelling Bose headset when on the go and uses Adobe Photoshop to edit his photo collection.

Suresh Vaswani
Suresh Vaswani Joint Ceo, Wipro
Regulars at Wipro’s headquarters in Bangalore will often see Suresh Vaswani, the company’s joint CEO, taking a brisk walk around the facility. On his walks (both at the campus and when he is travelling), Vaswani clips on the pedometer he acquired on a trip to Japan recently to measure the exact distance he walks. His Jabra Bluetooth headset and BlackBerry Curve are among the first things that go into his travel bag. “I have a comfortable pair of Sony earphones for my iPods. The fancier noisecancellation technology is for my son,” he says. 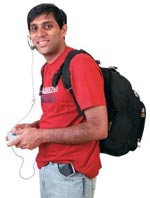 Mohit Anand
Mohit Anand Head, Channel [V]
The boss of music television station Channel V travels with a whole bagful of gadgets. “I’m quite the gadget freak,” he says. The man travels with two mobile devices—an iPhone and an HTC Windows Mobile. He also carries his HP “Ultra Portable” laptop, a 7-megapixel web-camera, a Sony digital still camera, an iPod and a Nintendo DS for gaming. “Everything I carry can be charged off the laptop,” he says. 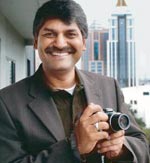 Anil Valluri
Anil Valluri Md, Sun Microsystems India
As a three-year-old, Valluri had stepped on a smouldering iron being used by his technician father. However, such accidents don’t seem to have unsettled the tech-freak. His must-have list for the road includes a Sony Vaio notebook, Canon PowerShot S3 digicam, Bose AKG headphones and an iPod Classic (with the iJuice to extend battery life). The amateur photographer uses software such as SoundForge while on a flight. With his Vaio’s hard drive almost filled up, a portable disk is the next item on his shopping list. Shriram Adukoorie
Shriram Adukoorie Co-Founder, Ask Laila
Forty-year-old Shriram Adukoorie buys the latest gadgets before they can make their way to India, spends his free time playing Need For Speed on his Sony PlayStation Portable PSP and manages to squeeze time out from all this to manage a website (www.adukoorie.com). He also loves his Canon EOS Digital camera with 300D lenses. “I love clicking photographs wherever I travel. I carry a few lenses with me—a 70-200 (4.5) zoom, 10-22 (2.8) wide-angle lens and a fixed focal length 30 mm (1.4) lens,” says Adukoorie.

Of course, he doesn’t forget his trusty Sony Vaio TX series laptop (it has five hours of battery life and comes in very handy when he’s stuck at airport lounges) and Dopod PDA while he is travelling. “I use my Dopod 818 Pro to browse the Net and have also set my RSS feeds with about 20-25 favourites on my phone browser,” says Adukoorie.

Guide to work and play

An SUV for the city