In the 80s, the American sitcom Cheers used Boston's Bull & Finch bar as its stage set. Practically a protagonist on the show, the bar captured popular imagination and became the blueprint of the good old sports bar as we knew it. Almost three decades later, the Bull & Finch still pulls the crowds, but as a classic throwback. The sports bar has long since moved in to the 21st century.

Cricket has gone T20 and golf can be played indoors with simulators, so it's no surprise that the comfortable, casual watering holes with a couple of Tvs tuned into the match, have gotten a radical overhaul. Now they are not just a backdrop, but a major player in a sports fan's experience of a given game.

They're the preferred places to make some noise and whip up team fervour, especially during high-octave games, like India-Pakistan cricket or Federer-Nadal tennis. Today, young India prefers to enjoy their Grand Prix and Tour de France over kegs of ale and pours of wine, making the sports bars a new age subcultural phenomenon across metropolises.

Sports Bar & Lounge
Le Meridien, Bangalore
The beer capital of the country-Bangalore is the city at the front edge of India's nightlife scene. Giving sporty vigour to its afterhours spirit is this cosy and contemporary lounge set in the plush lobby of the Le Meridien. With backlit silhouettes of sportsmen recessed into the walls, the place reveals its theme in subtle yet strong details. There is a large projector screen and nine smaller screens that broadcast sporting events live from across the world. To make sure you don't miss a minute of the action, even the washrooms come equipped with streaming television. Over 50 lounge recliners and high bar chairs perch on raised wooden deck floors, and swivel and tilt to accommodate the best view of your game.

Manu Cafe and Bar
Palladium Mall, Mumbai
In 2010, Forbes listed Manchester United as the richest soccer club in the world. The brilliant branding for the club, along with the talent it recruits, helps push passionate fans to a frenzy. The latest haven for Red Devils supporters opened in February last year. in Mumbai. The first in the country and seventh in the world, this 3,000 sq ft club sports Man U's signature colours of red and black. A giant football shaped chandelier suspended near the entrance welcomes fans and a 'wall of fame' notice board gives the latest updates and highlights of team records and player trivia. A section of the bar is fashioned as a dugout with snug couches and cubicles flanked by red footballs stamped with the team's logo. The giant projection screen and smaller plasma ones stream all the live matches and also re-runs of the club's famous victories. There's also a table named for their famous coach Alex Ferguson and a 20-seater private dining space complete with a Nintendo Wii and Playstation 3. Clad in the club's jersey's and scarves, the staff serves nachos, fish and chips and club sandwiches soaked in the spirit of Old Trafford. 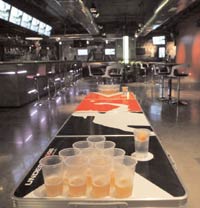 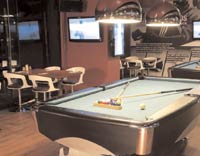 An underdog's victory is the sweetest success possible; remember the amateur American Men's hockey team that defeated the Soviet Union in the 1980 Olympics or the Indian cricket team's surprise win in the 1983 world cup? With legends of the underdog grafittied on its walls, this new sports bar in Vasant Kunj is the place to go drink when your team's chances are slim. Sprawled across 10,000 sq ft, this bar is crowded with over 40 TV screens and four giant projectors which stream live matches and highlights. Indoor games such as pool, scuffle board, darts and table tennis and drinking games such as beer pong and flip cup offers distractions when underdogs perform to expectations. There's a video gaming zone with PS3, Xbox and Wii systems, if you want to be a champion in your own right. The bar also houses two private lounges with a capacity of 10 that are fitted out with the goods. Whether its the installation of sport shoes suspended in air or the collage graphic of underdog victories imprinted on couches, walls and table mats, every little part of the bar sticks to the theme. Even the food and bar menu symbolises team spirit. You can order the football shaped beer tube which serves eight pints or share a team platter with friends. If you're playing solitaire, the Stadium nachos and the Texas Rodeo burger are good bets.

Turf Pub Le Waterina
The Boutique Hotel, Chennai
Chennai, has been an emerging platform for sports recently. As if being the home city for Grandmaster and current World Chess Champion Viswanathan Anand, weren't enough, it also brags tennis star Mahesh Bhupathi and of course, the most successful IPL squad in the country. Extending the city's noble sporting pedigree, Turf Pub is Chennai's very first sports bar. Launched in April this year, this rather snug space can seat about 60 . The floor is coated with turf grass and gives the feel of the great outdoors sporting traditions while the walls are decked out with vintage jerseys of famous footballers. Basketball hooks, dart boards and banners of football leagues strewn about, add a fraternal adrenaline buzz. One oversized screen and five smaller ones show the latest in motorsports, cricket and football. The bar counter mimics a piano keyboard and in-house DJs spin nightly so even if the game isn't moving fast enough, your feet keep tapping. After a long hot day of golf, seasoned golfers and their ameteur counterparts can cool off under a classic chandelier that drops from a golf umbrella styled dome. Along with pictures of golfing legends and antique golf memorabilia sourced from private collections; replicas of famous trophies and bar coasters with figureheads of eminent golfers are on display. Bearing resemblance to the traditional Scottish clubhouses are the olive green leather seats and the teak and mahogany floors finished with hand knotted carpets. At this cosy variant of the greens, you can pair rare whiskies and Cuban cigars with snacks named after famous golf courses such as Spain's Valderrama and Georgia's Augusta National.

Sports Bar, MSC Cruises
The Slendida and Magnifica ships feature ten-pin mini bowling alleys. Their Sports Bar (picture above). Owing to their scaled-down size and tough phenol surface, they are easy to play on and don't require you to change shoes. The bar is equipped with two large LCDs which offer a host of videogames including Ten Pin Tour and Turkey Shoot.
Website www.msccruises.com

Real Sports Bar and Grill, Toronto
The ultimate sports haven in the land of the maple leaf, this cosy hideout is replete with leather couches and fire places. With an extensive food and bar menu thrown in, this is just the place to catch rugby and ice hockey matches.
Website www.realsports.ca

Bungy Bar, Singapore
In the party capital of bustling neighbourhood of Clarke Quay, this bar is hailed for its delectable mar munchies and a multi-tap system that allows you to relish the world's best beers. What's more, sit back and enjoy live guitar on the side.
Website www.bungybar.com

Leo's All Star Sports Bar and Grill, Los Angeles
Lakers, gators or bulls! Whichever NFL team you're cheering, this is the place to catch the action. Pair the New York steaks and Louisiana clam chowder with 10 varieties of beer. You can also try your hand in a game of digital bowling and touch screen video games.
Website www.leoallstar.com
TweetYoutube