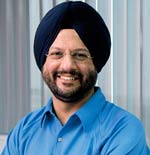 Prabhdev Singh
There is a new colour to the White House, but Barack Obama has something in common with his predecessors. As many as 15 of the last 18 American Presidents have been hackers. No, not the kind that worm their way into your laptop but those that rip off tufts of grass in an attempt to put a little ball into a small hole. Of course, the golf ball does not recognise the fact that it is being smacked around by the most powerful man on the planet and so golf has been a humbling experience for most American Presidents.

The head honcho does stretch the envelope every once in a while. Bill Clinton, for example, was said to be quite liberal with his mulligans. Obama, though, is a different kettle of fish. The February issue of Golf Digest carries a very readable article titled ‘The New First Golfer’ by Don Van Natta Jr. An excerpt: And in golf, as in life, Obama refuses to take any shortcuts. “When he’d shoot an 11 on a hole, I’d say, ‘Boss, what did you shoot?’” says Marvin Nicholson, 37, the Obama campaign’s national trip director and now a special assistant to the President-elect. “And he’d say, ‘I had an 11.’ And that’s what he’d write on his scorecard. I always respected that.”

Honesty apart, that 11 does not say much for his golf but apparently those were early days. It was in 1997 that Michelle prodded her husband—then an Illinois State Senator—to take up something less injury-inducing than basketball. 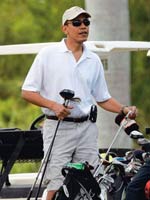 And then Obama shows that he’s like most of us, after all. He would sneak away from work on spring afternoons and drag some of his staff members with him. As for his game, he currently shoots in the mid-to-low 90s. It’s a familiar story—if he wants to get any better, he needs to get in more rounds and slug balls on the range. Don’t see Obama doing much of that now as he chases down terrorists and comes up against a new challenge, reviving the economy. Though he did play some golf in Hawaii before taking on his current job, Obama’s rock star status could take a drubbing if he is spotted on the greens, while thousands of his compatriots have their pay slips turn an ugly pink.

As of now, even the world’s best golfer has flexed his muscles for Obama. Tiger Woods said he was happy to see a man of colour move into the White House during his lifetime, though he would have been happier had his father, too, witnessed the transformation.

Now that White and Black have had their moment under the sun, wonder if we’ll ever see Red get its due. I’m talking about the Indians here. Not the turbaned variety but the feathered ones, the original inhabitants of the Americas. They have made small inroads into golf, alright. Woods’ former Stanford teammate and roommate Notah Begay III is the only Native American on the PGA Tour where he has won four times over the past decade.

He’s got back his PGA Tour card for 2009 and I will be following his progress closely, along with that of Mr Barack Hussein Obama.

The mall and me