Once you’ve experienced a private luxury jet, all you want is one of your own, reports

Commercial air travel is never the same once you have flown on a private jet. Sure the cabin feels like a cramped mini-submarine, but the Bombardier Learjet 60XR more than makes up for that in terms of sheer performance and excitement.

“You’ve never seen a performance take-off, have you?” jokes Nilesh Pattanaik, the Country Manager for Bombardier. He’s right, I haven’t. Which was an open invitation to the pilots to show me that the Learjet can also pretend to be an F-15 Eagle with deluxe interiors. As we line up on runway 27 at Hyderabad’s old Begumpet airport, I try fiddling around with the touch screen entertainment console when I am suddenly yanked back into my seat. I’ve accelerated fast before—from zero to 100kmph in a Porsche 911—but this is another league entirely. In a Learjet, you’re up to 500 kilometres per hour in less than half a minute and at 7,000 feet above earth to boot. Performance takeoff? Heck, yeah! 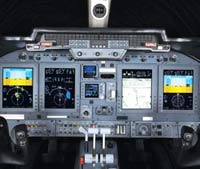 The front office
But the private jet experience is about much more than the take-off. At $15 million (Rs 75 crore), this plane is far from cheap, but then it comes fully equipped with seven seats, three on a duvet and four ‘captain’ seats, two on each side. The toilet seat can also be converted into a seat for take-off and landing, but is rarely used in-flight. Though, I was told at least one CEO of a company loves sitting in the toilet during flight for ‘alone time’. “Think of this as a well-upholstered supercar”, Pattanaik says, “it comes with everything but it is a small and nimble jet.” Touch screen entertainment controls
And, like your typical supercar, you can get it fitted out any which way you want—you can choose the upholstery, carpeting, wood finishes, the belt buckles and even the cutlery and glasses. This demonstration jet is fully kitted out, and even the cockpit has the latest goodies. The pilots are happy, calling this jet a joy to fly, and I can’t blame them. There are even 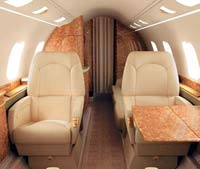 Better than business class
goodies all over the plane— little packets of chocolates and mints kept popping out of drawers and cupboards. Not to mention the bottle of wine. Now we’re talking.

As we climb to 41,000 feet above most of the commercial air traffic, I head back to my large leather seat and sit back to look outside the window, watching southern India in the distance. This is the life, far above the hoi polloi.
TweetYoutube

It's time to dress up!