Baden-Baden: 'It's so nice, they named it twice'

One can just about picture Caracalla-the wiry-haired, big-boned, Roman emperor- soaking naked in a large pool at the Friedrichsbad bathhouse in Baden-Baden, when he suddenly makes a thundering declaration that the town was the definitive wellness destination of his time. Word spread and from then on, royalty and members of aristocracy from as far away as Russia came to these areas and made them their own. The Romans saw the mineral springs for what they were: therapeutic.

All across Europe, Roman baths lie scattered, reminescent of the good life and need for indulgence. The German word 'bad' (pronounced 'baad') translates to 'take-abath'. The Rhine Valley in Germany is dotted with town names suffixed with the term. These denote the presence of a historic bathhouse. Baden-Baden is chief among them.

The curative hot springs here are rich in sodium chloride, sulphates, bicarbonates, hydrogen sulphide and radon-minerals that are said to cure a number of musculoskeletal conditions including rheumatoid arthritis. 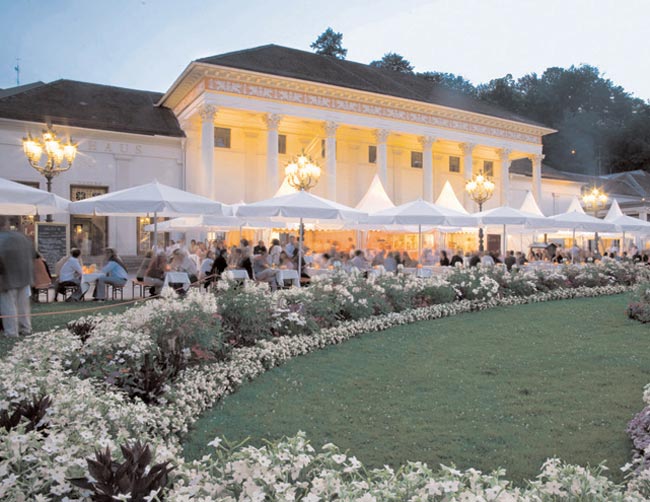 The neoclassical Kurhaus
But modern-day Baden-Baden isn't just a sanatorium for the Romans and royal. Instead, it is an elegant retreat for a discerning group that spends its winter months in Monte Carlo or Saint Tropez and heads to this temperate spa town when it gets warmer. With the town's posh amenities like an airport and an Edwardian racecourse, it is also fast becoming a weekend getaway for corporates travelling on work to the region. These lovers of decadence soak in the waters here, gamble at the ritzy casino, stroll in the immaculate parks, and waltz at the nightly balls. Of course, it helps that the town is just an hour's drive on the satin-smooth autobahn from the French border. It makes for a worthy stopover if you are headed to Frankfurt from Stuttgart.

"Baden-Baden has more millionaires than any other German town," gushes Beate Ando from the town's tourism office. She leads a guided tour through the belle époque townscape in the morning-pointing out the historic buildings and museums, dropping in a quick joke on the stream-like "mighty" River Oos that flows sinuously through the town. The centre is grounded by the charming Lichtentaler Allee park, bedecked with splendid trees and wealthy dwellings. There's also the Kurhaus, or community centre, with Europe's second-largest opera house and a casino that's steeped in neoclassical grandeur. There's also a cable car ride to Mount Merkur that overlooks the Black Forest.

During the tour I asked Beate informs that the town is most famous for its two bathhouses: Roman-Irish Friedrichsbad and Caracalla Therme. The latter is a modern building with large indoor and outdoor swimming pools, grottoes and saunas. For those who don't quite fancy the idea of going au naturel, as in the Friedrichsbad, Caracalla Therme is a relief as bathing suits are allowed.

"Which one would you pick?" I ask Beate, barely concealing my confusion, to which she replied, "I prefer Caracalla-Therme as I don't want to bump into my neighbours in the Friedrichsbad." Gradations of green grace the Lichtentaler Allee park; person for two hours. Timings: 9am-7pm.
Being naked in public is a sobering thought for anyone who is even mildly bashful. But the relaxed approach to the 125-year-old all-nude Roman-Irish bath is a clear indication of their nonchalant nudist culture. The Freikorperkultur movement that broke out in the last century made nudity acceptable in public areas in Germany. Guidebooks warn prudes of the world about Germans sunbathing in the buff in public parks. It was fine if it was a matter of choice, but here, at the thermal bathhouse, nudity is mandatory.

The aesthetic distraction of Friedrichsbad with its Neo-Renaissance style cupolas, mosaics, and column-ringed pools of spring water help in calming frayed nerves. To quote Mark Twain, one of the many famous patrons of this bathhouse, 'After ten minutes I forget time; after 20 minutes, the world.' The racecourse lies on the outskirts of the town and draws glamourous crowds
There are 17 'wellbeing' stations in Friedrichsbad-from geothermal steam rooms to pools that are set at different temperatures. I spend the next two hours wallowing in pure aquatic bliss. While entering the bathhouse I had believed I wouldn't survive even half an hour but to my surprise, I linger.

Twain may have also famously said that "clothes maketh a man", but he too was smitten by the waters of Baden-Baden. More than a century later, the ritual he so enjoyed is still very much alive.


A recommended detour if you visit Frankfurt on business