There's a certain thrill that comes from spotting a rustle in the leaves, silently pursuing it and finally being rewarded as you gain a vantage view through a set of magnified eyes. 'Birding' as it is popularly referred to these days, is a practice in patience that yields incredibly rewarding returns . 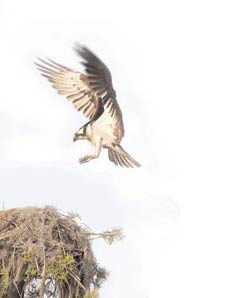 The rare Osprey can be found in and around Delhi
And contrary to common misconceptions, you don't need to travel far to enjoy it. If you have a Sunday morning that's unrushed and you want to make the most of it outdoors before being thrown back into the grind, birding affords you travel of a different sort. Delhi alone boasts a checklist of up to 500 species, the second highest in the world in a city after Nairobi. It makes for the ideal weekend morning, and you're back home in time for lunch. So whether you're sequestered in Delhi, Mumbai or even Kolkata, the chirps of the birdcall are never too far away. Set aside your next Sunday to trudge along in the wild and immerse yourself in birdsong. Don't forget your binoculars and camera.

DELHI
The Capital offers more than a few birdwatching sites and up to 500 species. Sultanpur National Park in Gurgaon, is a two hour drive from Delhi and one of the most popular and tourist spots for birders with mixed topography of wetlands, grassland and dry land. You should head out in small groups of up to six and just remember to stick to the trodden path. All you need is your binoculars, a reference book on birds and you're good to go. Ducks, egrets and herons are a given, and you just might get lucky and spot one of the rarer endangered species like the osprey. Alternatively, you can cut on your driving time by heading to the Aravalli Biodiversity Park along the ridge in North Delhi (get prior permission from park authorities) or even the Okhla Barrage Bird Sanctuary which winds along the Yamuna and has about 10,000 migratory birds during winter. Contact the Delhi Bird Watching Society at www.DelhiBird.com.

KOLKATA
Situated to the east of the Hooghly and with the Sunderbans just a 100 km away, Kolkata and its surrounding areas are a treat for binoculararmed birders. The best spots for success are the Botanical Gardens and the Chintamani Kar Bird Sanctuary. Located just 10 km from Ruby Hospital crossing, Chintamani is spread over about 17 acres and is home to over 150 species of birds, most of which are passage migrants. From the emerald dove, blue-throated flycatcher, grey-headed fish eagle, slaty-legged crake, and the Tickell's thrush, to the large-billed reed warbler and the added bonus of about a 100 types of butterflies, you'' find it all here. In contrast, Nalban on the fringe of Salt Lake is the place to spot a large number of ducks and if lucky, even the rare Ferruginous Pochard. While the kingfisher is a common sight here, try to catch a glimpse of the endangered marsh mongoose before it disappears altogether because of urbanisation. Prakriti Samsad is a local birding club in Tollygunge which offers assistance in the same.

MUMBAI
Every year, thousands of birds species migrate to Mumbai from around the world and settle into the city's birding locations to mate in its ideal climate. Mumbai is home to several birding sites. The Sewri jetty, located 1.5km from Sewri station, is the best place to photograph flamingos dotting the vast mud land. The Shilonda Trail at Sanjay Gandhi National Park in east Borivali is one the best natural habitats in which to observe woodland species like babblers, cuckoos and the copper-smith as well as multiple trees like teak, mango and bamboo. Even Alibaug's surrounding areas of Kankeshwar and Revanda are good spots. While Revanda is great for spotting the black-headed gull,ruddy turnstone, sanderling, greater sand plover and booted warbler, Kankeshwar is famous for it's hilltop temple and raptor species like the white-eyed buzzard, the spotted eagle and booted eagle. The best route to take is to approach Alibaug by ferry from the Gateway of India and then take a rickshaws further in. Contact the Bombay Natural History Society at www.bnhs.org/ for information of birdwatching events.
TweetYoutube
Tags: Weekend destinations | Weekend getaways | ideal weekend destination

Jazz up your super car