I find myself constantly surprised by the world around me. When I first started being sent around the world, I would sometimes face moments of trepidation about the unknowns of certain countries, regions and cities that I was being sent off to. 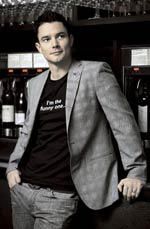 Oli Pettigrew, Host, Lonely Planet: Best in Asia ; airs on TLC every Friday at 9 pm uptil March
Funnily enough, I have begun to embrace this fear. It has always turned out that the places that I am most nervous about end up being among my absolute favourites ; Nepal, Oman, India, China, and the list goes on.

I remember having a certain amount of nerves before I left to tour Vietnam. For once it wasn't so much fear of the unknown (I've grown up all over Asia, so although I've never been to Vietnam, I was sure it would be familiar), but rather, the fear of leaving my son (who was 5 months at the time) behind for the first time. I can tell you that the first night away was wretched. In a little hut, on the side of the Mekong Delta, with no real light, water or internet to speak of.

I felt quite alone. But in the end, it was Vietnam's beauty and people that very quickly had me having a great time. And as we all know how time flies when you are having fun!

I had many adventures in Vietnam. I took a boat up the Mekong, toured Hanoi by bike, I even learned water puppetry. But the absolute winner was when we visited Halong Bay.

It was right towards the end of our trip, and we were all pretty tired and in Hanoi. To get to our next destination, Halong Bay was quite the mission. We set our bright and early in our van and spent a good three hours on a highway weaving in and out of tireless traffic.

All the while our driver communicated with the other drivers with what seemed like Morse code using his horn. We finally turned off on a random back road and started bumping our way along some dirt track We eventually arrived at the old ferry terminal. And when I say, old I mean 'old', and when I say ferry, I mean 'rusty piece of metal that defies logic by floating.'

After waiting an age for the ferry to cross the river, we loaded up and settled in for the quiet cruise across the gorgeous river with the beautiful limestone edifices in the background.

We disembarked almost an hour later (and yet only about a mile across) to drive another few miles across an island and then board yet another ferry of the same ancient design.

By this point, the sun was already getting low and we were all feeling a bit tired. So we found a nice fella who sold beer, bought our fair share and settled down on these rickety old plastic chairs and just drank and told war stories from past shoots as the sun started to set over the bay. It was a magical evening. The sky was clear, the sunset gorgeous and it was just so quiet. Sail boats and fishing boats would cross our path and it all really just felt so Vietnam. I remember all of us getting our cameras out and snapping away, trying to capture our own version of this magic moment which we knoew would soon slip away.

That's why I like this memory, because all of that happened off camera. We were just on our way to shoot another travel piece to create a memory for the viewers. But the journey itself turned into our own private moment, just for us. We arrived at Halong Bay late at night. We all hit the sack immediately as we had to be up before the sun rose the next day to send me 40 feet up a cliff-with no ropes- only to then jump off and land in the jellyfish swarmed waters of the bay.

It's called deep-water soloing, and has to be one of the most fun, and scary things that I've ever done; not just for work, but in my entire adventure-packed life. I'll never forget the moment I had to jump off that cliff. Every single millisecond of it remains firmly imprinted in my mind's eye even today.

Although the free-climbing I did in Halong Bay was amazing and still one of my all-time favourite segments of hosting a TV show, that amazing journey to Halong Bay, in all its madness, will always hold a special place in my heart.
TweetYoutube

Upcoming events and places to travel