Tee off in Turkey

Thwaaaack!" Tiger Woods was all business. His opponent Charl Schwartzel watched nervously as the ball sailed towards the greens. Ten minutes later, Woods sank a birdie for a twoshot lead over the South African. It was the opening round of the World Golf Final in Belek. Woods had started well.

On the drive over from Antalya airport, it's hard to miss Belek's ties to golf. It took just 20 minutes to drive through town. In that time, we passed 15 (yes, that many!) golf courses and resorts. Four more, we were told, would be ready by 2014; the farthest, a mere 15 minutes outside of town.

Belek's superlative facilities and infrastructure attracted eight of the world's top golfers here last October. No doubt, the $5.2 million prize purse (and at least that much in additional appearance fees) helped a bit. Back at the Antalya Golf Club, Woods had fallen behind. A triple-bogey on the ninth hole gave Schwartzel a two-stroke lead. Not far away, the current world no. 1, Rory McIlroy, was doing better. He was 1-under by the 9th hole. Unfortunately, his opponent Matt Kuchar, was 3-under.

Woods and McIlroy would meet in two days-their first-ever competitive match. It seems as if every golf fan in Europe had descended on Belek to watch them. For a small town, Belek doesn't just have an abundance of golf courses. It's blessed with an abundance of courses designed by golf's biggest names. Take the 27-hole Nick Faldo Golf course at the Cornelia Resort. Guests enjoy top-class facilities at a 5-star, 4,800 square metre club house. They can also take in a lesson at the on-site academy managed by the 30-year veteran David Leadbetter. His students have won more than a dozen Majors and over 100 individual tournaments. The uniquely designed Sueno Golf Resort is located in Belek. It's stunning surroundings hold 18-hole golf courses, basketball, volleyball and tennis courts, three football fields, a cinema and a spa.
Less than a mile away, is the Montgomerie Maxx Royal, designed by Colin Montgomerie. This 6,486 metre course is set amidst 104 acres of natural pine forest. If that isn't good enough, the hotel itself features stunning 'villas on the water', where you can wake up to the Mediterranean Sea.

Besides these, Belek is home to a number of other top-rated courses. The Gloria Golf club is designed by French expert Micahel Gayon. It's framed by the stunning Taurus mountains in the backdrop. Uniquely, its practise range consists of a pond with islands that form the target greens. The Antalya Golf Club, where the World Golf Finals was held, and the nearby Sueno Golf Club both have two 18-hole courses.

Back at the action, Woods and McIlroy had both lost their first round but the former champion came back strongly to take his second game against Matt Kuchar. McIlroy however, settled for a 1-stroke loss to Schwartzel. That set up an exciting final.

Unfortunately, a heavy lightning storm forced anxious fans to wait another day for the match. When the duo finally took to the greens, a crowd in its thousands surged behind them. Woods won 64-70, sending the world number 1 crashing out of the competition without a win. Justin Rose, would eventually pocket the $1.5 million prize. Woods took home $600,000 while McIlroy, for all his disappointments, still earned $300,000.

The best part about Belek is that it sits in one of Turkey's most touristfriendly regions. If your family doesn't enjoy golf, Antalya's beaches, historical Roman ruins at Side, Perge and Aspendos and the balmy Mediterranean weather all year round, will definitely win them over. 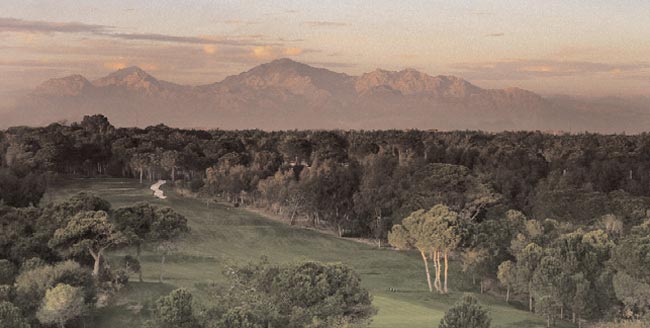 Turkey's Taurus mountains create a dramatic backdrop for an evening game as the sun sets across the Mediterranean.
That makes Belek ideal not just for golfing getaways or business offsites, but for family vacations as well. What's more, specialist travel agents are more than happy to do the planing for you. Oner Uygun, the managing director at Millennium Golf in Belek, organises all golf course and hotel reservations, golf lessons, luxury transfers and car hires. He even organises shuttle and guide services for non-golfers who want to take in Antalya's other attractions.

It's no wonder then, that Belek was voted Europe's number one golfing destination in 2008. Just six hours from India, it is one golf capital you don't want to miss.