The story of vintage bikes

The wind doesn't dare hold you back. The dust rises and settles at your command and the never ending stretch of road is yours to conquer. The prime reason why the motorcycle reigns supreme is the free will it lets the rider execute. Whooshing past freeways and kissing the ground on an occasional hair-pin bend, you sense a pounding heart and a gasping breath and feel blessed when you realise it's your own. In the existential angst we call life, riding comes close to flying in dreams. For purists though, a bike is only bested by a vintage bike which has been time-tested.

Mounted atop a skeletonised mean machine from yesteryear, the rider lives out Marlin Brando's rebellious streak from The Wild One and mimics John Stamos' military masculinity from Born to Ride, and still retains an envied character of his own. The Harley Road King classic 2008 is reminescent of American police bikes from the 70s.
In the beginning of the 20th century, British officials began shipping their bikes into India, for use during their tenure. Rarity translated into exclusivity and they struck good bargains with royalty and rich merchants. This was the period around the first World War, when airplanes and tanks were the order of the day and the motor industry was taking its first, but sizeable, leap. The English were only happy to sell off their Nortons, BSAs and Triumphs and move up to advanced models back home. Although limited to a moneyed few, India's tryst with motorbikes had been thrown into gear.

In 1955, the Indian government ordered a few hundred Royal Enfield , to help the army and police grapple with the North East's weathered terrain. This popularised the trend and attached to the bikes radical metaphors of austerity and fearlessness that people loved relating to. But, the concept wasn't quite embedded in the country's cultural conscience until the post Nehruvian era of the 60s and 70s. 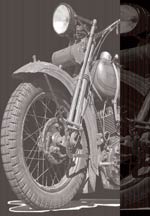 The exposed workings of military machines lent them their much-admired rugged character
The age revelled in its new found cultural modernity, arising from an unparalleled exposure to international culture through books, movies and music; this time more American than British. So, whether it was the king of rock n' roll flashing around his metallic Harley in Vegas or a Cuban revolutionary's historic motorcycle trek through South America, a contemporary youth culture was taking shape.

Today, the Indian auto industry tells a story of speed and mileage. With Hondas and Kawasakis springing out of the far east, each time with sharper and fiercer models, bikes are judged more on performance than feel. Still, a closely woven vintage auto industry takes pride in keeping classics roadworthy.

Given their presence in Indian history, passion for classic bikes is focused on American and British models. Owing to their giant highways, Americans clamoured for bulky dirt bikes, while the Brit bikes were assembled for riding through narrow European streets. Several Indians started collecting these rare machines and Gurgaon based entrepreneur and aficionado Madan Mohan, has sourced vintage beauties like the Velocette (1911) and Ariel (1930) from royalty and is someone who understands the industry well. According to him, British bikes were cheaper and more easily available and the trend to buy them continues even today. 'While the American bikes like Indian Chief 1300cc(1951) and Scout 750cc(1930) cost up to Rs 35 lakh in their restored state, the English Norton(1920) and Bullet(1955) can be acquired for about Rs 7 to Rs 8 lakh'. On the question of pricing, Ved Prakash, a third generation dealer of vintage bikes based in New Delhi adds that restoration is the main expenditure and is far less tedious if the company is still in operation. 'This makes it easier to source parts and find trained mechanics. So, while an Indian takes Rs 1.5 to Rs 2 lakh, a Royal Enfield can be road ready for approximately Rs 50,000. A 1922 Norton 500 finds a home in a vintage-themed restaurant in Gurgaon, Haryana
Prakash adds, 'There's a huge demand for rare chunky bikes like BSA 650cc(1949), Triumph Twin Cylinder 600cc(1956) and Triumph 350cc military model(1940)'. Interestingly, most buyers pick up scrap and conserve and customise in their unique style. There are restorers across the country. The well known and most experienced ones are Manvendra Singh Barwani in Indore, Rishad Kundanmal in Mumbai and Tutu Dhawan in New Delhi.

The main challenge of restoration, according to Dhawan, arises from the fact that most manufacturers have died out and modern mechanics find it hard to get a grip of the workings. The experts in the market today have been around for decades and put years of experience to use. In fact, they take up to two years to educate their mechanics, a practice that might end up preserving history one day.

The question of investment is a complex discourse. While purists like Madan Mohan like to be referred to as collectors with a penchant for rare bikes, restorers like Tutu Dhawan recommend it as a viable business. In Mohan's defence, this is a closed market of collectors who don't wish to sell, and restorers who can't work on more than 2 to 3 bikes in a year.

In such a landscape, sourcing functional machines becomes difficult. Since you need to wait a minimum of three years for its value to appreciate, you also land up incurring a fair amount of maintenance cost. The motivation for nurturing a rare beauty won't come as naturally to a business driven mind. For instance, it's difficult to maintain a Douglas (1920), which features a belt instead of a chain, has wooden breaks and a light that comes on with the flame of a match stick.

Dhawan, on the other hand, considers vintage bikes a viable investment. He points to sale statistics which indicate a steep appreciation in prices. In early 2000s, a restored BSA Lightning(1968) was available for a mere Rs 40,000, today it costs nothing less than Rs 4 lakh. Also, maintenance depends on the quality of restoration. An elaborate job with attention to detail will reduce the cost drastically.

Since engines are only available with handful of stockists, enthusiasts acquire antique grid shells, fit them with modern engines and spray on the war paint. The speed monster will now be ready to cross the 100 kilometres per year barrier; a strict prescription for an even longer life of any vintage vehicle.

Since most manufacturers are based in Delhi, Mumbai or Kolkata, collectors in smaller cities find it harder. Edwin Peter, a Coimbatore based collector wilts at his need to make multiple trips to the metros each year, to source parts and seek assistance for restoring a bike. On the brighter side, there's an upsurge of corporate funded vintage bike and car rallies, where bikes from around the country are showcased. The prominent ones include the annual Haig Vintage Car and Bike rally at Kala Ghoda, Mumbai, and the star studded Western India Automobile Association (WIAA) where Gautam Singhania's beauties share space with Vijay Mallya's. The tradition is also kept ticking through exclusive interest groups like the Heritage Motoring Club of India.

It takes a vintage bike and a passionate rider to learn life's quintessential lesson, the journey is more intriguing and inspiring than the destination after all.

Good health delivered in a box