When you have a restaurant as authentic as China Kitchen, and a cuisine as broad as Cantonese, changing the menus is no simple affair. 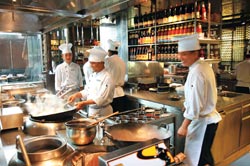 The China Kitchen at the Hyatt is a welcome haven from the heat and humidity of the capital. Tucked away at the corner of the hotel’s swimming pool, in the spacious confines of its modernist glass and chrome interiors, Hyatt’s Executive Chef Dieter Lengauer is holding forth on scorpions and the Indian palate.

“Well, you see, if we really bring in the truly authentic Chinese recipes, we’ll have to include scorpions in the menu, not to mention snakes. That would be a bit too outré for India,” he says, with a mischievous glint. He knows comic timing, Dieter. One guesses that he needs it, especially when he has to argue politely with patrons about the efficacy of poppy seeds in an apple strudel.

Admittedly, such run-ins with indignant patrons help him and China Kitchen change and update its menu, twice a year since the restaurant came into being two years ago. These two years have been good to the restaurant, with a steady stream of regular diners and a reputation for one of the best Chinese spreads in town. This is one of the times when the menuchange takes place, and since The China Kitchen is a hit, it is a special occasion.

The reputation is richly deserved. Sampling the fare under the benign eyes of Sanjeev Kumar, the Chef De Cuisine of China Kitchen, I marvel at the dumplings. These melt-in-yourmouth delicacies are the true measure of any Chinese restaurant, and going by the Pan Fried Pork and Chives, and the Pan Fried Chicken and Seafood dumplings, I must say that China Kitchen is in rude health. Both of these are new dishes. So how does it work, this grand process of changing menus? Dieter and Sanjeev fill me in. 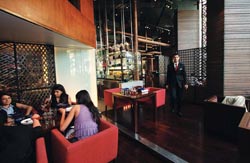 Subtle elegance: The interiors were designed by a Hong Kong firm

As befits the occasion, it’s a fairly long process. First, the sales of items on the menu are reviewed, a good way to weed out the non-performing duds from favourites. Guest feedback on dishes is also factored in. The initial team of reviewers then goes over seasonal changes that can be made. Finally, when a consensus has been reached over a number of dishes that need changing—including seasonal replacements—the menu is changed. Two master menus are made, one in English and the other in Chinese. While the English menu’s framed and proof read here, the Chinese version’s sent to Beijing. Once done, a bilingual menu is prepared.

Going through the menu, I see 16 changes. Why so few, I ask Dieter. “Well, we’re a young restaurant yet, and we cannot make such wholesale changes. The core menu has to remain constant,” he says. The thinking behind the change is to find a better balance, and perhaps arrive at an ideal menu. It makes sense. In fact, the three dishes under China Kitchen’s specialties have remained the same. I savour a few more of the new ones. One of the highlights has to be the Wok-fried King Prawns with salt, pepper and potatoes.

Shellfish is the holy grail of the Chinese palate, and the prawns are almost crumbly soft, just right. Then I try the Peking duck from the base menu, and the restaurant’s ‘don’t fix what ain’t broke’ approach is vindicated. That said, the new menu— which came into effect from April this year—has some great new additions like the Wok tossed King Crab, the Sea Bass Fillet, Shredded Chicken Breast in Chili Sauce and New Zealand Lamb Medallion “Hot Pot”. 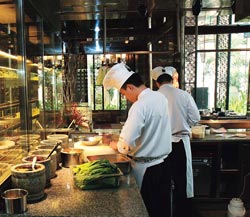 At work: China Kitchen has a large crew of 29 chefs

The dining space is shielded from the main floor of the restaurant by finely lattice-worked partitions. The overall décor is classy with just the right amount of modernist flourishes. The work of a Hong Kong design firm called Superpotato, the décor is fit for a Tarantino film. Dieter tells me that the tiles and wood came from China, along with Chinese workers, who then put the place together in eight months. For a while we take a break from the food and visit the kitchen.

The open kitchen is abuzz with activity. China Kitchen has a team of 29 chefs, eight of whom are Chinese. While this guarantees authenticity, often there are problems of cultural assimilation. As Dieter himself admits, Indians are probably as gregarious as the Chinese are reserved. The Chinese staff live together in a house nearby the hotel; none of them speaks any English or Hindi.

You can imagine the issues this causes in a bustling kitchen. But they have a system whereby the orders are printed in both English and Cantonese script on the same ticket, so there are no errors in translation. And Sanjeev has picked up elements of Cantonese along the way, during his own training. Under his watchful eye, the kitchen runs like clockwork, and all the chefs seem to be grinning most of the time.

The reasons for this are simple. All the chefs dine together just before the restaurant opens for business. The kitchen that eats together seems to stay together just fine. And this is reflected in the food.

“You’ll love this,” says Dieter, when it’s time for dessert. A part of the core menu, the Chocolate Fondue is indeed delicious. Seasonal fruits, chestnut crème puffs and peanut Madelines surround a huge bowl of hot, molten chocolate. While biting into my second crème puff, I can’t help thinking that China Kitchen might just be really close to that ideal menu.

We love the new mitsubishi outlander