When was the last time you saw a snake? In your wine glass, that is.

While alcohol is undoubtedly one of the earliest inventions ever, man never stopped experimenting and improving on it. From flaming shots of tequila to super-strong Martinis, every generation has come up with newer and more exotic ways to have their drink.

For a Douglas Adams enthusiast, the best alcoholic beverage in existence is the Pan Galactic Gargle Blaster - the effects of which are similar to having your brains smashed in by a slice of lemon wrapped round a large gold brick. But if you are looking for the zaniest drink outside of fiction, here are a few suggestions that may sound stranger than anything you have ever read in a book. A SCORPION… ON THE ROCKS

Vodka is for women, did you hear somebody say? The Russians couldn't disagree more.

A strong concoction that once helped soldiers of the erstwhile Soviet Union brave the biting cold of Siberia, it has served as a base for numerous cocktails and been the inspiration for many an experiment in cocktail mixing. But who would have thought that one day, somebody would dunk an actual arthropod into your vodka bottle - tail et al?

While a scorpion in your yard would be capable of delivering a sting that requires immediate medical attention, experts say that the one in your vodka bottle imparts a soft, wooden taste that - contrary to what you may think - actually smoothes the sharp edge off the liquor. And what's more, the scorpion is made to undergo a complete detoxifying process, so you can actually gobble up the little critter once the drink is done. A crunchy pincer, anyone? GET HIGH ON LIZARD

If you believe that lizards serve no useful purpose, here's a little fable from Vietnam.

Once upon a time, a couple of squabbling wall-crawling reptiles fell into a vat of rice wine. Though aghast, the lady of the house couldn't bear the thought of throwing away something that she had made so painstakingly for the guests who were to arrive later that evening. So, imagine how thrilled she was when they took just one sip from the weird concoction and decided that the lizard liquor was the best they had ever tasted!

Ask liquor experts who have been adventurous enough to try Three Lizard Liquor, and they would say that its flavour is a lot like brandy - with the most otherworldly aftertaste. But if you are the kind who wouldn't touch one of those reptiles with a barge pole, we won't be particularly judgmental if you decide to give this a miss. 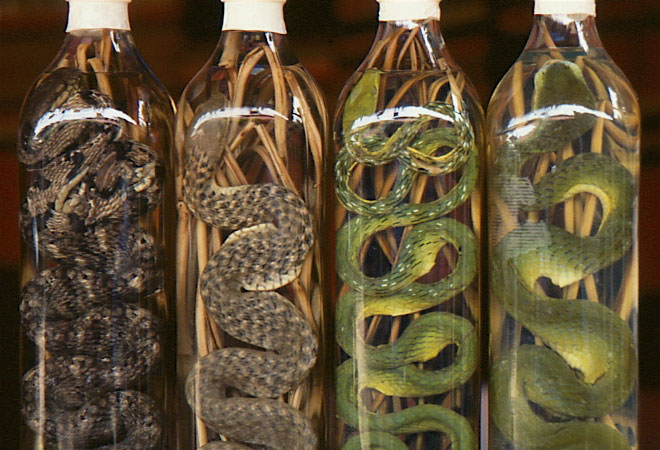 SLITHERY PLEASURE
If you ask somebody 'What's your poison?' in Vietnam, don't be too surprised if the person crinkles his face in deep thought and replies: "Uhh… cobra?"

The reason for this reaction may be snake wine, which - basically - is a kind of rice wine with a serpent thrown in it. The snake isn't your regular garden variety either; the Vietnamese are known to make their wines with venomous creatures such as cobra and krait.  According to experts, the characteristic taste doesn't come from the snake's meat, but the poison itself. Thankfully, the wine's inherent ethanol content neutralises the toxin - revealing a full-bodied protein-rich spirit.

As if that's not enough, snake wine is known to have curative properties - so you get a dose of good health with that high. Provided the serpents aren't on your country's endangered species list, that is. 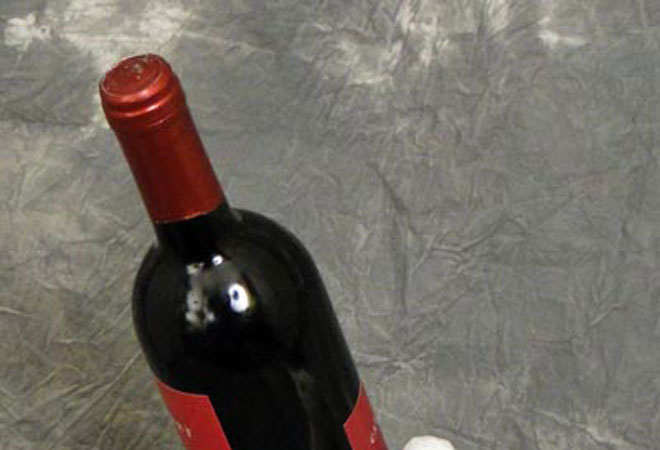 Seagull Wine
SEAGULL WINE
This one comes straight from the North Pole. A drink developed by Eskimos to keep themselves from freezing to death, seagull wine is widely acknowledged as one of the nastiest liquors ever made. And unlike the others on this list, the creature is not a simple addition to an otherwise standalone beverage; it is used to make the wine itself.

The process of manufacturing seagull wine involves stuffing the bird into a bottle, then leaving it to ferment in direct sunlight for a prolonged period of time. The taste? Experts haven't been able to make out the difference between seagull wine and carburettor fluid, but they are quite unanimous in their opinion that it does hit the spot. Hard. ABSINTHE
This may not seem as exotic as snake wine or scorpion vodka, but make no mistake, absinthe is the brand ambassador of the nasty beverage category. Luminous green in colour, absinthe was banned for a good part of the 19th century - and with justifiable reasons too. The liquor, made of wormwood and anise, is said to have hallucinatory properties, and has been associated with epilepsy, tuberculosis and a propensity to indulge in violent crimes. But, that said, absinthe has also doubled up as the muse for various personalities in the history of art - including Ernest Hemingway and Henri Privat-Livemont. Now that it is legal again, get yourself a bottle of the green fairy; just make sure somebody else is driving the car.

A Tale of Two Cities