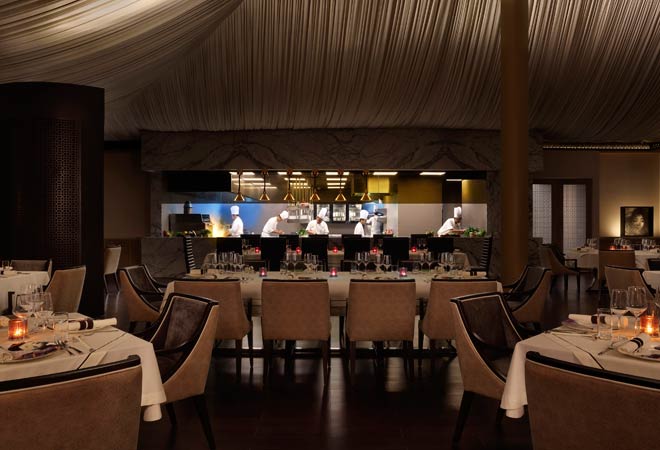 Chi Ni at the Dusit Devarana hotel in Delhi

Invert the pyramid and be whimsical, because that's what Chi Ni is all about. The newest restaurant at the Dusit Devarana hotel in Delhi is loosely modelled on Kai Mayfair, an establishment that finds favour with wealthy Indians when they travel overseas.

In fact, Bird Hospitality's Ankur Bhatia along with Bernard Yeoh, proprietor Kai Mayfair, has created this concept for Indians who love the Orient. Kai is a Michelin-star restaurant but since the stars are not recognised in India, one can say that Chi Ni is Michelin-star level sans the actual star of course. Braised Bean-Curd Eggplant Szechuan Style
Let's begin with why you should go here. The location is beautifully scripted with an 18-foot high canopied tent forming the ceiling of the well-crafted space that overlooks the water bodies of the hotel.

The open kitchen is spanking clean, buzzing and very modern (they have a fancy oven sitting in one corner and I reckon it needs a manual to be used). The platters are Shanghai Tang and stunning, the chopsticks in the private dining rooms come at $125 a pop (we joked with the General Manager Birgit Holm that a chopstick detector should be installed to check guests leaving, since the pieces are so delicate and scream luxury) and it is elegance all the way. 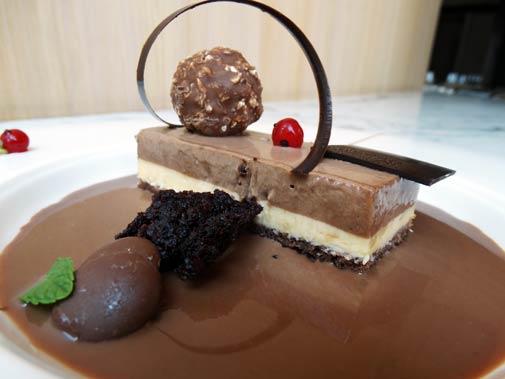 Senses of Chocolate
The menu opens with dessert, giving you cues to store the precious nuggets in your head as you go about ordering your meal. Chef Ban who is the head chef here has worked in numerous Michelin-star establishments and is a keen master of Chinese flavours and textures. The most interesting thing about the menu is the mock meat and fish which is delicious and draws on the memory of non vegetarian flavours without the guilt of eating a chicken or goat that typically accompanies PETA-fied foodies.

Begin with the soft shell crab in salt and pepper which is prepared in a batter so light, you almost forget it has oil in it. Crunchy, with bag loads of flavour, this appetiser stays true to the origin of the dish and you can taste the crab in all its sweetness. The wasabi shrimp and Peking duck are two other dishes that are highly recommended for their authenticity. If vegetarian, i would recommend the blanched baby spinach with sesame dressing which is treated with care and loses the overpowering earthiness that sometimes accompanies spinach in India. Creamy Citrus Prawns
Moving onto mains, the steamed Chilean sea bass is outstanding and so delicately cooked, it literally flakes when you pick it up with your fork. The Australian lamb chops with black pepper sauce are a disappointment though, as the flavours are too European for a Chinese kitchen and while the meat was perfectly cooked, it did not hold much flavour. The signature rice with homemade XO sauce is brilliant and we are told the chef spends as much as eight hours getting the sauce right. What was the biggest surprise though was the mock chicken with three chilli. Given that I am a regular chicken eater, the dish impressed with its near perfect imitation of the original. They have fish and seafood mock options as well and I am told they are equally good. The braised bean curd with eggplant is another melt-in-your-mouth kind of vegetarian option.

The ample wine menu at Chi Ni does not distract from the food and you can end you meal with some glorious baked yogurt with red berry coulis and a mango sorbet. While I did not fancy the coulis, the yogurt was creamy and delicious, as was the sorbet. The apple ice cream sandwich also got a thumbs up with the classic apple, cinnamon and burnt caramel combination being given a modern, innovative twist.

Head to Chi Ni for a special occasion and feed your stomach and your senses. Highly recommended for vegetarians who always feel short changed in Chinese restaurants the world over.

'I may own RFC, but I remain a small-town boy'