If the oxymoron was a restaurant, it would be this quaint eatery tucked away in Hauz Khas Village, New Delhi.

Enter the newest branch of Smoke House Deli, located conveniently close to the Village entrance, and you are transported to a creamy white world of make-believe royalty. The walls are bathed in white, adorned with sketches of sultans and administrators who once ruled over Siri, the second medieval city in the Alauddin Khilji Dynasty's Delhi Sultanate. The arched windows of the establishment remind you of the kind that the Khiljis would have once looked out of, admiring the expanse of the kingdom they ruled over with an iron sceptre.

So you think you have a basic idea of what the cuisine's going to be like. But that's before the attendant walks over, and you take a look at the menu.

Cold Sandwiches, a sub-section under starters, features a fairly long list of continental preparations such as Smoked Pimento + Leeks, Herbed Balsamic Smoked Chicken and Roast Tenderloin. You flip through to find various kinds of pasta nestled between page 4 and 6, and Lightly Smoked Lamb Shanks and Zattar Spiced Prawns featured prominently in the 'mains' section. Certainly not the Murg Musallam and Nargisi Kofta you had been expecting. Your eyebrows crinkle up in mild yet pleasant surprise. 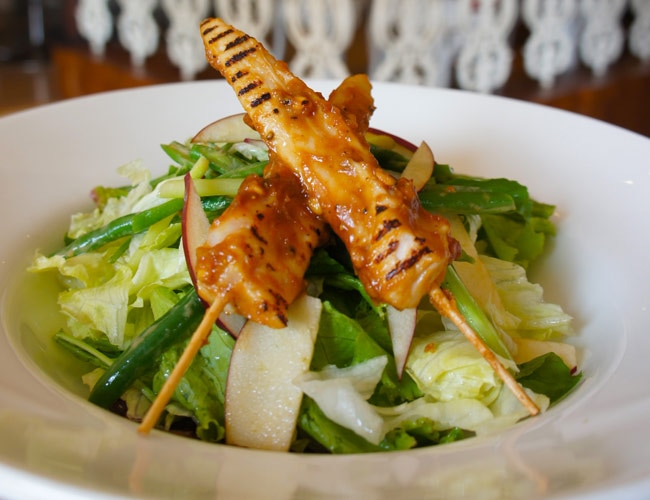 Green Bean, Apple & Satay Chicken Salad with Peanut Dressing
At first glance, the Hauz Khas establishment seems a sight different from its cousins in Vasant Kunj and Khan Market - both of which reflect the very Europeanness that dominate their cuisine. But take a peek under the covers, and you find the same Smoke House Deli that you have grown to love and cherish.

We launched off with a starters platter put together by our host, thoughtfully designed to ensure that we get a lick of a good part of the menu without bursting from the seams.  The Lamb + Chipotle Patties was particularly sumptuous, the meat spiced ever so slightly to retain its flavour - coupled with all the lactic sinfulness of cheese melt. The Grilled Chicken + Lemon Grass + Coriander Skewers, reminiscent of the Oriental, proved to be the perfect accompaniment to Jacob's Creek Chardonnay white wine. The Wangim Marinated Tenderloin Salad with Toasted Peanuts, on the other hand, was the only dish that tasted even remotely Indian that evening - like chunks of beef thrown into a spicy spread of exotic jhaalmudi, if I may be so blasphemous.

Embedded in the muted tang of the smoked chicken and goat cheese tart was a generous portion of greens and chicken dotted with fig pieces, creating an unlikely symphony of flavours. The vegetarian dishes didn't disappoint either; they left us wanting more. The Wild Mushroom and Artichoke Crepe Gratin was a silky smooth crepe, brimming with cheese, button mushrooms and nuts.

It's here that I would like to sprinkle in a few words of praise for the service at the restaurant, something that could spell the very difference between liking and hating a gourmet establishment. You are made to feel absolutely at home at the Smoke House Deli; every dish is served with a smile and a flourish - at times accompanied by a helpful tip or two. The food doesn't take a lot of time coming and, believe us, you won't find yourself tackling a cold bowl of pasta either. 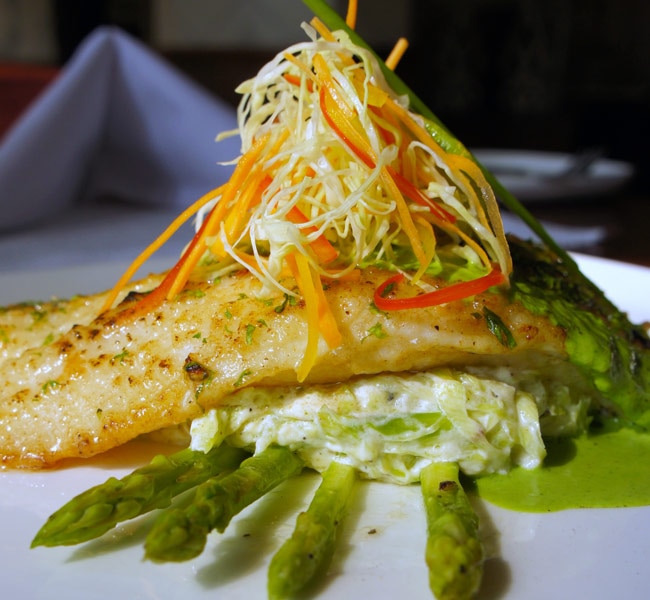 John Dory with Smoked Shimla Chillies and Creamed Leeks
Moving on to the mains, I ordered Tenderloin Steak with Fried Potatoes. Our attendant asked how I would like it, to which I responded 'medium rare' - albeit with a certain degree of scepticism.  Accustomed to being handed a well-done steak - regardless of what I ask for - at the many continental restaurants I have visited across the capital, I was pleasantly surprised to find that the meat was grilled to perfection with a luscious pink centre. When dug into, the meat turned out to be juicy with the perfect texture and just the right amount of chewiness. Any complaints? I like my steak with gravy, as opposed to the dry chunk of meat I got here, but that's a matter of personal preference.

The John Dory with Smoked Shimla Chilli turned out to be generous slices of the fish baked to tender perfection on a refreshingly creamy base of shredded leeks - this time accompanied by Rothbury Estate Cabernet Merlot from the red wine section. John Dory hadn't died in vain.

The evening ended with some White Chocolate & Orange Crème Brulee and Apple Crumble, and while stepping out the door - tummies leading the way - we assured our hosts that we would return. We weren't kidding, not by a long shot.