Svedka has made an impressive array of variants - from cherry and clementine to vanilla and raspberry - available across the globe.

The evening of Svedka's launch in India was truly memorable. But, truth be told, wish I could remember more of it.

Don't get me wrong. For somebody who rates his drink on the basis of its taste and potency quotient, the smashing new vodka from Sweden scores at every level. Each sip of Svedka was flavoursome, silken smooth and delivered the requisite punch that only the best of liquors can deliver onto a veteran drinker like me. Most importantly, it made me feel at ease in what seemed to have started off as a slightly awkward evening - nudging me on to shake hands with the right people, ask a few questions off the cuff, deliver a few one-liners until the dining hall finally blurs into a fog of comfortable numbness. Luckily, I was taking a cab home.

The evening of February 11 got off to a fairly sober start with some chit-chat with an affable Jake Jacob, vice-president (Asia) of Constellation Brands, and Joe Milner, its regional director. I ask Jake about the firm's plans for India, and whether it plans to replicate its highly successful Sexy Robot ad campaign here. "Oh no," he replies with a laugh, "We conducted a study, and realised that it may not appeal to our Indian target audience. We won't be recruiting celebrities either... Here, Svedka will be its own star campaigner!"

And why not, considering that this is a brand that has received a number of awards since its inception in 1998 - including a silver at the International Wine and Spirit Competition-2004 - and notching up a rating of 93 points from Wine Enthusiast. And if its ads are to be believed, Svedka aims to become the most popular vodka on the planet by 2033.

Not a very well-rounded number? "We decided on 2033 because it would come exactly 100 years from the lifting of the Prohibition," Jake says. But - quite understandably - he wouldn't complain if it reaches the top much earlier, either.

"Care for another drink?" It's Joe, and he recommends a Moscow mule - a heady concoction of Svedka with ginger ale and lime (minus the customary copper mug). Take the first sip, and you realise why this particular cocktail never really went out of fashion since its invention in 1941. A second, and you discover why they put the animal in the name.

Or not. Only later did realisation dawn that I was basking in the presence of a liquor that cloaks its potency in sheer smoothness, sending you spiralling down the rabbit hole to a happy-land with rainbow rivers and pink elephants without any warning whatsoever of the experience to follow.

Blissfully ignorant of the effect that Svedka is having on my grey cells, I continue quizzing Jake on its foray into the Indian market. He replies that while the brand has quite an impressive line-up of flavours internationally - ranging from colada, strawberry colada and orange cream pop to mango pineapple - its first steps into India would be with the regular, citron as well as the clementine versions.

"Right now, Svedka is big in the United States. While we are also looking at other countries like South Korea, it's India that we are really focussing on. We aim to become the second-biggest vodka brand in India over the next five years," says Jake.

He pauses, then looks at me. "You have finished your drink. Would you like another?"

Never shall I be accused of turning down a good glass of vodka, and this is definitely better than good. So, when he asks how I would like it, I sheepishly confess to an overpowering desire to knock down a shot - a decision that contains sense and stupidity in equal proportions. Vodka shots - as you can imagine - are bereft of alien additions, and therefore better for judging the flavour and smoothness of a liquor. Unfortunately, they are also the fastest vehicle to a state of short-term insanity.

Somebody recommends a potent combination of three-quart regular Svedka and one-quart citron, and when the drink arrives, I realise why it's liquor #7 in the United States. As is my wont, I let the warm liquid swirl in my mouth - allowing my tastebuds to revel in its tanginess and the slightest of sting - before letting it seep deeper within and get down to the business of warming the cockles of my heart on a cold winter evening. And it is so smooth, I could have sworn somebody is clandestinely spiking my drink with agua de Kinley. That wouldn't have explained the buzz in my head, though. Getting louder, and louder, by the moment.

But wait, the tipsiness notwithstanding, I still have to ask my questions.

"So," I hear myself ask, "Does Svedka plan to open any manufacturing units in India?"

"None at the moment," replies Jake, adding that he and MBPL executive director Suhail Mehra would rather test the waters with imports before taking a step that big. Then, looking down at my shot glass, he asks if I would like another. Good sense recommends a polite denial, considering that I have already lost count of the drinks I have had that evening. But then, didn't the invite explicitly instruct me to "resist everything but temptation"? 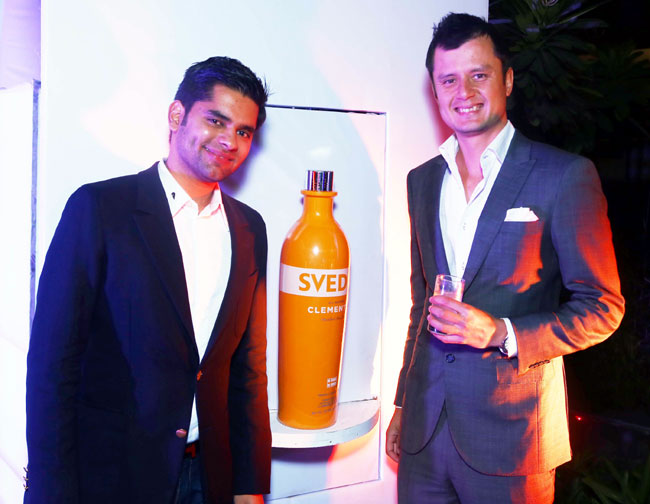 I have that shot, and probably a few more. Dinner follows, and there's the clink of cutlery and visions of the ceiling swirling around drunkenly. Cut.

The evening of Svedka's launch in India was truly memorable. But, truth be told, wish I could remember more of it.