British Polo day was a curious blend of polo, heritage and fashion

English and Indians indulged in pitched battles on horseback as socialites drank to their health during the recent British Polo Day at Jodhpur. You had to be there. 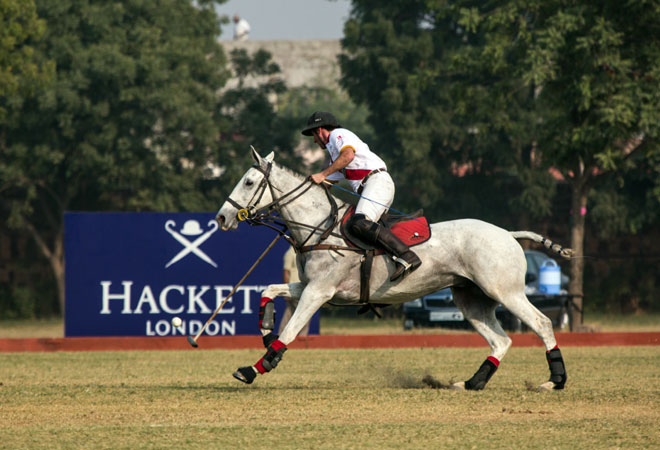 Viscount Melville Bobby Dundas in action during the British Polo Day at Jodhpur.

"The good thing about British Polo Day is... the girls look very pretty." So boomed the commentator through the soundboxes on a nippy Saturday afternoon at the Jodhpur Polo & Equestrian Institute grounds, and he wasn't wrong.

With hundreds of British and Indian nationals thronging the grounds to cheer for their respective teams, each comparing their Guccis and Versaces over glasses of sparkling wine, there was as much happening outside the field as inside.

Tear your eyes away from the pretty people and onto the ground, and you witness a battle raging between Eton College and Mayo College - their horses grunting under the strain as the two teams try to make the most of the chukker they have been pitched into. You take a sip from the glass in your hand; nothing helps the excitement as much as a little Royal Salute, which - incidentally - happened to be one of the sponsors of the event. 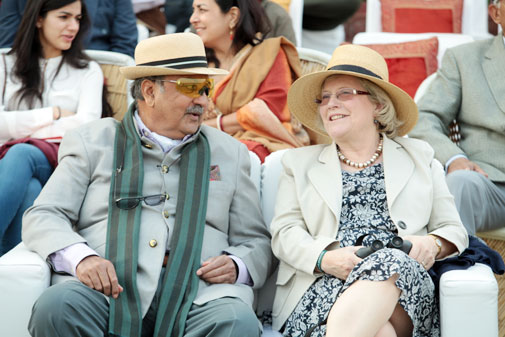 Maharaja Gaj Singh and Lady Phillimore of Oxfordshire
Indeed, the British Polo day was a curious blend of polo, heritage and fashion, puctuated by hearty sessions of eating, drinking and holding an ear to the grapevine. The evening after the Eton-Mayo match saw everybody from the players to the esteemed guests - including celebrities like the Maharaja Gaj Singh of Jodhpur-Marwar, Miss World runner-up Parvathy Omanakuttan, International model Olivia Inge and fashion designer Raghavendra Rathod - rubbing shoulders on their journey through the truly magical ramparts of the historic Umaid Bhawan Palace.

And picturesque it was, featuring everybody from fire-eaters to traditional Rajasthani musicians, all in attendance on that freezing December night to provide the guests with entertainment that's no-holds-barred in the proper sense of the term.

And quite a rewarding journey too, because at the end of it - at a point where the entire city could be viewed in the form of an exotic tapestry of lights - was laid out a beautiful spread of dinner and liquor.

Opting for sparkling wine this time, you indulge yourself in an absorbing conversation with some of the other guests when who should join in but the Maharaja himself! After exchanging pleasantaries, he gets down to talking about the intricacies of the game and how a handicap is actually a good thing in polo.

All very interesting for a greenhorn like you. The next day featured a scintillating match between the Taj Jodhpur team versus the Landrover Sahara Warriors, in which Jodhpur took away the honours with a 4-2 score.

A pity, considering that the Sahara Warriors featured a blue-blooded former World champion named Viscount Melville Bobby Dundas (who put up quite a good fight indeed).

Dundas has been riding horses since the age of three, and playing professional polo from the time he turned eighteen. During a chat later, you ask him if the sport of his choice will ever get as popular as football or cricket. Dundas shakes his head, probably just a tad sadly. "Well, I do think it would be great if polo manages to get a wider spectator base, but - frankly - it probably can't," he says.

"With something like football, people can simply watch their heroes play and then run around kicking a ball. That's just not possible with polo; you can't just grab a horse and make it gallop around at will. Also, the rules of polo are quite complicated if you have no idea what's going on."

Probably, but it is quite an enthralling game anyway. Coming close in the heels of the Jodhpur-Warriors match was the much-awaited contest between the British Army and the President's Bodyguard - something that the latter won 1-4.

But notwithstanding who won or lost, the event did bring India and England together in a heartwarming display of unity.

About British Polo Day In just four years, the British Polo Day calendar has grown to encapsulate a network of over 10 events annually, including Abu Dhabi, Australia, China, Dubai, India, Mexico, Morocco, Russia, USA and, of course, Great Britain. The story of British Polo Day stems from a love of the ancient sport of polo, something that is thought to bridge cultures, bringing together a like-minded community on a global scale.

The aim of a British Polo Day is to continue the tradition of playing high-quality amateur polo against friends across the world, at the same time acting as a platform upon which a network of diplomatic and commercial opportunities can be built. British Polo Day showcases over 30 top British luxury brands and acts as a conduit for championing craftsmanship and heritage in emerging markets.