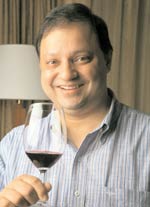 Sourish Bhattacharyya, Executive Editor, Mail Today
As Britain battles binge drinking, and David Cameron's government mulls over legislation that will make it mandatory for all alcohol to carry health warnings, the spotlight is now on the drinking entitlements of British MPs.

The members of this privileged club don't have to be drunk on power because more often than not they are just drunk - as was scandalously brought to light by the recent arrest of Labour MP Eric Joyce for giving a bloody nose to three Conservative MPs in a drunken brawl.

The parliamentary estate at Westminster, reports Reuters, has nine bars that earned Pound 1.33 million last year and the custodians of the House of Commons have stocked 44,000 bottles of 69 different wines in the last two years. And British taxpayers coughed up Pound 5.8 million last year to subsidise this party, which allows an MP to have steak and chips for Pound 7 that a member of the public pays Pound 15 for.

Fortunately for us, we may have to suffer politicians who make us poorer in other ways, but we don't have to subsidise the good life of our elected representatives. Thanks to the Directive Principle of State Policy that makes it mandatory for the State to promote abstinence from alcohol, green coconut water and colas are the only beverages offered at the Parliament House canteen. That's all very noble, but I can't understand the anachronistic Gandhian logic of the government, irrespective of its political colour, insisting on making state banquets and official parties 'dry'.

Occasions such as these are seen as opportunities by nations to promote their food products and wines. Our state banquet menus, instead of being written in some arcane language, must be used to promote prestige produce such as Basmati rice from Punjab, organic soybean from Uttarakhand, bekti from the Hooghly, and lobsters from the Andaman Sea - and of course, Indian wine.

Official banquets can be turned into showcases for the agricultural produce of a country. Chile's former president Michelle Bachelet showed how, when during her 2009 visit she hosted a lunch for Delhi's who's who with Chilean sea bass, salmon and wine. Why, then, is our government shy of presenting Indian wines to the world? I don't even hear of our embassies abroad promoting our wines.

The idea of serving Indian wine to our foreign guests isn't to get people drunk or to flout Gandhian principles (which we don't remember anyway) but to get them to import the product and help the grape farmers of Maharashtra and Karnataka earn more money. Is that a bad thing for a government to do?