The Indian arm of a leading global non-profit professional association recently released a list of the top 20 Indian HR influencers on Twitter . "The idea was to give some sort of template to tap into the changes afoot," says G. Ravindran, CEO of Strategic Human Resource Management (SHRM) India, which undertook the survey for the list.

A lot can be learnt from the list, according to Ravindran, as it draws attention to a wide spectrum of employer and employee views and behaviour. Gautam Ghosh, third on the list, is the poster boy of the HR space. He is a social media expert who represents BraveNewTalent in India, which helps organisations create talent communities. In 2009, Ghosh himself found a job opening, thanks to Twitter. "I saw a tweet that 2020 Social was looking for people. I replied and the next thing I knew I was being interviewed for the job." 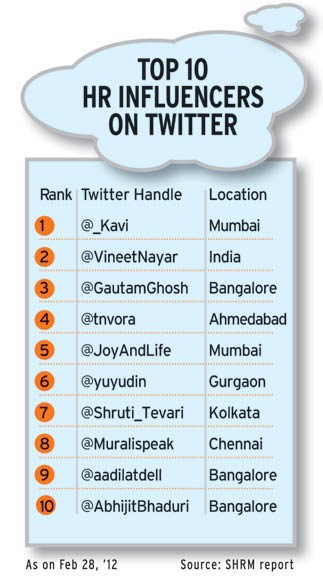 It is not only Twitter. Kamal Karanth, Managing Director of leading recruitment agency Kelly Services India, says he got an offer within four months of putting up his profile on LinkedIn in 2009. "I was posted in Kuala Lumpur and was heading Randstad (Asia Pacific) when I was spotted by Kelly for the role in India."

Kelly Services's own survey last year revealed that more than one of five job aspirants in India accesses social networking sites such as LinkedIn, Facebook and Twitter. It sought the views of approximately 97,000 respondents in 30 countries, including almost 2,000 in India.

Many talent firms looking to fill senior positions now also bank heavily on the social networking space. "We use LinkedIn a lot as it gives rich information and a better view of a profile," says Uday Chawla, Managing Partner at Transearch India, a global search firm for senior executives. "It adds to our database, and we often get additional information, even for validations."

Companies are also leveraging the space to build employer branding. According to Ravi Shankar, Senior Vice President, HR, HCL Technologies, his organisation has even created an internal networking site called Meme. "Among other things, internal policies and their utility for employees get discussed. Also, any ideas employees come up with that need funding are aired and get the immediate attention of all stakeholders," he says.

So, for an employee, the big question is: how should he/she make the most of the space? For starters, it is best to have an updated profile. "Often, people do not even update their work profile on Facebook or their picture is missing," says Kelly Services's Karanth. It also helps to keep your tweets and messages relevant to your profile and interests, which could give those interested an insight into your talent and what makes you tick.

The big caveat is, of course, understand the tool first. Companies and jobseekers should remember that on social media, members of their audience can talk to one another, unlike in any other media. "Those handling social media need training and must not be forced into such engagements," says BraveNewTalent's Ghosh. Ultimately, a company's culture becomes its brand on social media. "The first step is to cultivate a transparent culture internally," he adds.

Careers: Preparing for the cloud era