Clayton Savio Bastian is Duty Manager at the Hilton in Janakpuri, New Delhi, but he is a small-town Goan at heart. The 28-year-old works nearly 2,000 km from the state where he was born and raised, even though it is one of the world's favourite seaside holiday destinations. He is an example of the growing trend in the hospitality industry of recruiting staff from small towns.

MUST READ:Why global hotel chains are rushing to India

Hilton Worldwide's next hotel in India - scheduled to open in a few weeks in Gurgaon, near Delhi - will have 15 to 20 per cent more smalltown recruits than its last. Sunil Kumar, Regional Director, India, for human resources at Hilton Worldwide, says there is a shortage of skilled manpower.

The trend of recruiting from Tier II and III cities is not limited to the metros, however - the increasing number of hotels in small towns is adding to the demand. The trend is also industry-wide, and not restricted to a few big chains.

MUST READ:ITC - The pioneer in hospitality industry

"There has been a 20 per cent increase in hiring from small towns over the past five to six years," says Gurmeet Singh, Marriott International's Area Director of Human Resources for India and the Maldives. 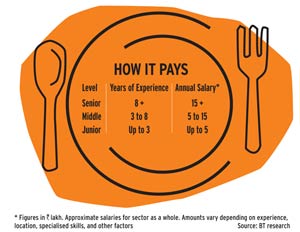 Click here to Enlarge
It does not look as though demand will slow down any time soon. Hilton's Kumar says the industry expects to add around 61,000 hotel rooms over the next four to five years.

There are some 120,000 hotel rooms in the country at present, according to Richie Madan, Executive Director at Elixir Consulting, a recruitment process outsourcing company.

10,000 is the number of hotel management graduates a year in India, but the demand is three times as much

"The requirement is at least three times this number," says Hilton's Kumar. His group plans to add six hotels by the year-end, bringing its total in India to 14. To staff them, it will have to look in Tier II and Tier III cities.

The Oberoi Group is also scouring small towns. That is where some 40 per cent of the group's employees are from, says Amrita Bhalla, Executive Vice President for Human Resources.

"For the Trident Hyderabad, which is slated to open later this year, we'll be hiring 300 to 400 people from Tier II and III cities," she says.

Bhalla says proper training is especially important when recruiting from smaller towns, because candidates often do not have the same kind of exposure as their Tier I counterparts.

"Brushing up English language skills, and developing cultural awareness and selfawareness, are key to the learning process," she says.

MUST READ:Hospitality sector looking up

Sarovar Hotels & Resorts, which opened six hotels in Tier II and III cities in 2011 and hired around 200 people from these cities, had to do exactly this. People had to be trained for senior roles.

"We have an e-learning platform and in-house training to help our people develop the required skill sets," says Ajay K. Bakaya, Executive Director.

Small-town recruits may require careful training, but Marriott's Singh points to a quality that endears them to employers: they are less prone to changing jobs than their counterparts in big cities.

Small towns themselves are adding to the demand. "There is huge hiring demand from Tier II and III cities today," says Madan of Elixir Consulting.

"With reasonable operating costs, low property prices and increasing disposable incomes, hotel chains are finding it easier to set up hotels in these cities."

With premier educational institutions coming up in small towns, the aspirations of locals have changed, and hospitality is increasingly seen as a career option.

"People get to stay with their families, work with good brands and build a career for themselves," says Madan.

MUST READ:Some of the finest hotels in the world

Sundeep Mathur, Vice President for Human Resources at Royal Orchid Hotels, says small towns are the "place to be". His chain has increased hiring from such locations over the past two years, and opened hotels in cities such as Hospet, Mysore and Shimoga in Karnataka, Mussoorie in Uttarakhand, and Vadodara in Gujarat.

"We are soon going to cross 500 team members in Tier II and Tier III cities," he says. He adds that many employees see "offbeat" locations as opportunities to learn and grow.

The career of 42-year-old Suman Nannaiah, General Manager of Royal Orchid's two properties in Mysore, is a good example of the growth opportunities that smalltown India offers. With 13 years of experience in the hospitality industry, she joined the front office staff at one of Royal Orchid's Mysore hotels in 2009. Within two years, she rose to a managerial post, and oversees about 140 people today. Now, that is a five-star career move.

'Engineers are and will continue to be sought after'