Much Ado About Homework

Allowing employees the choice of working from home usually – but not always – benefits both the employee and the company.
Manasi Mithel | Print Edition: April 28, 2013

Yadunandan S., a Bangalore-based consulting systems engineer with global networking giant Cisco, needs to work from home. He has a one-year-old son and believes in sharing child rearing duties with his working wife.

He alternates all day between bathing, feeding and looking after his toddler on the one hand, and coordinating with fellow employees in his company's sales, marketing and engineering divisions on the other. "I'm constantly on the phone with colleagues both in India and outside," he says. Don't some of them find his multi-tasking strange? "Everyone understands," he adds. "Barking dogs and crying babies are no longer considered odd sounds on our international calls."

In a wired world, many jobs are 'location agnostic' - theoretically, the precise spot at which a person works ought to make no difference to the quality of his performance or the quantity of his output. In recent years, a number of companies have installed technologies which enable seamless communication, irrespective of location. 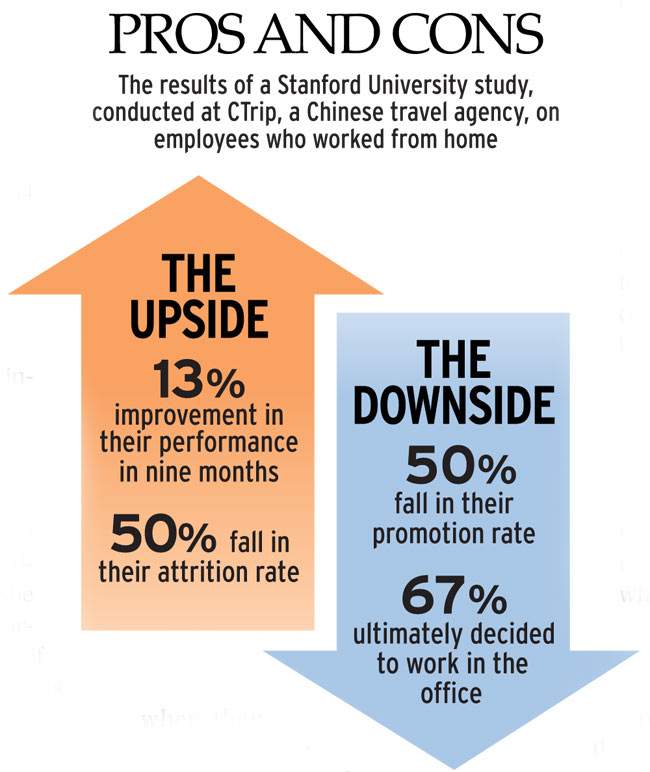 A good number of these, Cisco among them, have started giving employees the option of working from home. There was always debate, however, over whether this practice, while certainly benefitting employees like Yadunandan, did the company any good. The debate has taken a sharper edge since late-February when Yahoo! CEO Marissa Mayer revoked the practice in her company, insisting all employees attend office.

Indian human resource (HR) experts believe Mayer's decision had more to do with Yahoo's persisting difficulties than an indication that the 'work from home' option promoted inefficiency.

"Yahoo! has been going through a challenging time for the last few years," says Kris Laxmikant, CEO of HR consultancy Headhunters. "Maybe she wanted to create a sense of urgency to address this. It is not as if the technology to connect people is not working." Rituparna Chakraborty, Vice President of HR consultancy firm TeamLease, agrees. "Yahoo! needs to get back to the drawing board as a team. Every successful organisation has done this when required. The decision is a sensible one," he says.

So what is the evidence in favour and against allowing employees to 'telecommute' - as working from home is called - should they want to? Some benefits are obvious: it enables companies to retain talent which may otherwise have taken a break from working, it allows women to get back to work much earlier than before from maternity leave, it saves employees the time and money spent on commuting to work and back. Indeed, globally, the practice began as an effort by companies to retain staff it valued.

Are there other benefits? Cisco itself conducted a global survey of its employees in 2009 which showed the company saved $277 million a year by offering the telecommuting option. In the study, 69 per cent of respondents said their productivity was higher when they worked away from the office, while 75 per cent felt they were better able to meet deadlines. "If you don't provide employees the right work-life balance, why would they put in the kind of hours they do," says Daisy Chittilapilly, Vice President, Information Technology Systems, at Cisco for India and other SAARC countries. "If we don't offer flexible working conditions we'll break down as an organisation."

There have been other studies. Stanford University released the results of one such this February, conducted among call centre employees at Chinese travel company CTrip, which allows the 'work-at-home' option. Carried out over nine months, it looked at both those who worked from home and those in the office. It too found productivity rose by about 13 per cent when people worked from home, breaking this up further into a nine per cent improvement because those at home took fewer breaks and fewer days off when ill, and the remaining four per cent because, having a quieter work environment, they could make more calls per minute. But it also noted that those who stayed away from office were often passed over for promotion.

A startling feature of the Stanford study was that 67 per cent of those allowed to work from home eventually began coming to office. Lack of physical interaction with colleagues clearly does take a toll, apart from leaving the telecommuters clueless about changing office dynamics. There are other problems.

Pooja, a testing analyst from an IT company is the only member of a 25-strong team who works from home, since she lives in another city. She took a transfer to the city to be with her family, which needed her. "When I worked in the office, I had to only deal with my immediate manager," she says. "Now that I am away, I have to also tackle the HR manager and other function heads. I also have less control over the kind of work you get." Indeed she feels she is given less work now than when she used to attend office.

Thus working from home has both benefits and drawbacks, but the way seamless global communication is improving, the concept of an 'office' at which employees congregate each working day may well itself become obsolete soon.

Correction: The print version of the story incorrectly gave Daisy Chittilapilly's designation as President, Information Technology Systems, at Cisco for India and other SAARC countries. The error is regretted.

Careers: From executive assistant to rising to the top

Why more law graduates are going into litigation