This case study looks at how the Chennai Metropolitan Water Supply and Sewerage Board leveraged the citys coastal location, developing a model that not only enables it to get low-cost water but also encourages private-sector participation.
N. Madhavan   Delhi     Print Edition: Mar 16, 2014 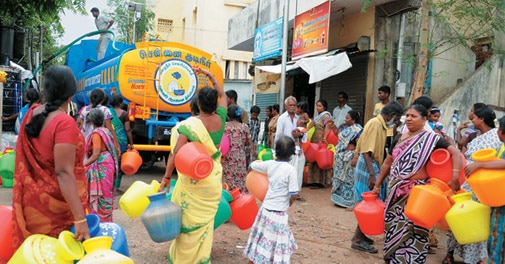 A file photo of Chennai residents filling water from a tanker in Mylapore. With two desalination plants augmenting the city's water supply, such scenes are a fading memory. Photo: H. K. Rajashekar/www.indiatodayimages.com

EXECUTIVE SUMMARY: Water, a politically sensitive commodity, has always been underpriced in India. This sector has bankrupted most state-run water utilities and made the private sector wary of getting into it - thereby leaving large parts of the country water-starved. But this state of affairs need not continue. This case study looks at how the Chennai Metropolitan Water Supply and Sewerage Board leveraged the city's coastal location, developing a model that not only enables it to get lowcost water but also encourages private-sector participation.

The water scarcity Chennai faced in 2003/04 was unprecedented in the citys 400-year history. Its four reservoirs went bone-dry as the monsoon failed for two consecutive years. The ground water level, too, fell sharply. Piped water supply was shut down and remained so for almost a year. The Chennai Metropolitan Water Supply and Sewerage Board (or Metro Water, as the citys water utility is popularly called) barely supplied 175 million litres on alternate days. At the time, the citys population of 4.5 million needed 600 million litres daily (MLD). Much of the water - around 100 MLD - had to be transported from aquifers 150 km away, on trains and trucks. The citys residents had to pay substantially to buy water from private suppliers, spending an estimated Rs 50 crore a month.

The crisis pushed the state government, then led by Jayalalithaa (in her earlier stint as chief minister), to look for ways to drought-proof the city. The state government launched the New Veeranam project, which envisaged a supply of 180 MLD from the Veeranam tank, 225 km from Chennai. The tank is at the tail end of the Cauvery river system, and is fed by the southwest monsoon. The citys reservoirs depend on the northeast monsoon. But it still meant that all water sources - Veeranam, the citys reservoirs and the Telugu Ganga project (which made Krishna river water available) - remained dependent on the rains. This was a source of worry.

But that threw up many challenges. Water, being a politically sensitive commodity, is always underpriced in India. Such pricing has driven the private sector away from water projects and left state-run utilities deep in the red. Not surprisingly, large parts of the country are water-starved. As data placed in Parliament by the Urban Development Ministry in September 2013 showed, 22 cities in the country have water shortages of 30 per cent or more.

Desalinating water is costly, and involves advanced technology, so private-sector participation in Chennai was critical. But Metro Water was not exactly in the pink of financial health.

Still, it went ahead. With no experience in desalination, it opted in 2005 for a build, own, operate and transfer (BOOT) model of private-sector participation to set up the first desalination facility. It entered into an agreement with IVRCL Infrastructure & Projects Ltd, which had environmental technology company Befesa Agua of Spain as a partner, to set up a 100 MLD desalination plant at Minjur, a suburb north of Chennai. In turn, it would pay IVRCL 4.8 paise per litre of water supplied for 25 years. The project began supplying water from July 2010. 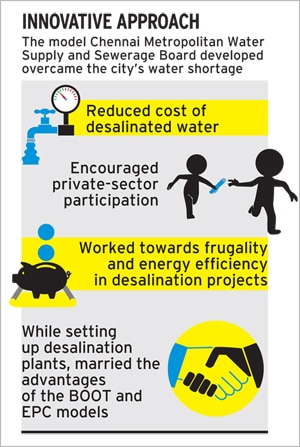 Even as the Minjur project was being developed, Metro Water began studying alternative business models of desalination that would not only reduce the cost of the desalinated water, but also give it a say in the choice of technology, to ensure cost efficiency. It also wanted to use its learnings from Minjur for future projects. A BOOT project offered no such scope.

After months of research, Metro Water finally arrived at a hybrid model. "We decided to marry the advantages of the BOOT and EPC (engineering, procurement, construction) models," says Metro Waters Chandra Mohan. The new model allowed private-sector participation, and also leveraged the governments strength in terms of capital mobilisation and risk management. The government would pay for and own the plant, but construction and operations would be in private-sector hands. For the 100 MLD desalination plant the Metro Water planned at Nemmeli - south of Chennai, en route to the famous Mahabalipuram temple - it zeroed in on this model.

"The cost of capital and the associated risks [as bankrupt state utilities are the major buyers] are big elements," says M.S. Srinivasan, Senior Vice President, VA Tech Wabag, a Chennai-based water treatment company. "They add up to two paise per litre of water, and push the end price of water to around five paise. This model took these costs out of the equation."

To keep costs low, Metro Water took the bidding route right from the detailed project report stage. In August 2007, Mecon Ltd, a public-sector undertaking, was awarded the contract to draw up a detailed site-specific project report. Unlike most other projects, Metro Water also asked Mecon to do a detailed engineering assessment of the project. This meant that finer details of the project, such as the choice of technology, machinery and plant design, had to be firmed up early on.

Advanced Integrated Membrane Technology was chosen for the Nemmeli project. Not only was it five per cent cheaper in terms of capital costs, but it also had relatively low running costs and consumed 20 per cent less power than rival technologies (energy accounts for 65 per cent of desalination costs). It also consumed fewer chemicals (and hence was more environment-friendly) and required less land. The Nemmeli facility took up just 20 acres of land compared to Minjurs 60 acres. (IVRCLs Minjur plant uses conventional filtration systems.)

To keep costs low, non-proprietary equipment was preferred. Metro Water ensured a pre-treatment process was in place. As the Bay of Bengal is a rough sea, a lot of dirt enters the system through the intake pipes. The Minjur plant had faced enormous challenges initially due to this.

Once the project report and detailed engineering plans were in place, EPC tenders were invited in January 2009. Bidders were given the report and drawings, and asked to quote a price to build the plant. "Metro Water put a lid on the choice of technology, design, machinery and got EPC contractors to offer the best quote," says Srinivasan of VA Tech Wabag. "In the normal course, contractors would have given a quotation using different technologies, and Metro Water would be comparing apples and oranges."

Simultaneously, Metro Water invited seven-year operation and maintenance (O&M) bids. This process factored in energy efficiency by fixing energy consumption. "Median energy consumption parameters were arrived at. If the O&M operator exceeds them, he is penalised," says Chandra Mohan. "This way we ensured that bidders did not quote low prices for the EPC part and recoup them through O&M." Six of seven bidders qualified, and VA Tech Wabag in collaboration with IDE Technologies, an Israeli consortium, bagged the contract in December 2009. To ensure that the EPC contractor adheres to the design, Mecon, which drew up a detailed project report, was appointed as project management consultant.

Work on the Nemmeli plant started in April 2010. The plant reached full capacity in December 2013. It cost Rs 533 crore to build. Today, water from Nemmeli costs just two paise per litre. "It has cut the cost to a level that is politically palatable. It offers tremendous scope for replication across the country," says Srinivasan. Experts say the execution of the project offers interesting lessons.

Water shortage returned to Chennai this year, after a poor monsoon last year. Storage in the reservoirs is low, and the groundwater level is falling. But with two desalination plants producing 200 MLD, Metro Water has kept up the citys supply at 831 MLD. Desalination accounts for a quarter of the citys water supply.

As a follow-up to Nemmelis success, Chief Minister Jayalalithaa has announced two more large desalination plants for the city, of 150 and 400 MLD capacity, based on the Nemmeli model. These are expected to be up and running by 2018, accounting for 70 per cent of Chennais water needs and making the city drought-proof for the first time in its history.

How Daikin scripted a remarkable turnaround story in India

How Horlicks has avoided getting dated