Jack of all foods, Nirula's, has been confounded - if not confused - by the onslaught of the kings of niche foods. But its perceived weakness could become its key appeal and strength, says Shalini S. Dagar. 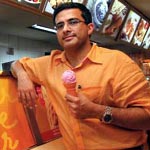 If you turn the corner at L-block in central Delhi's Rajiv Chowk, you will run into a Haldiram's food outlet, which for many Delhiites, is a jarring realisation of the changing times. This, after all, was the flagship location of the legendary eating establishment, Nirula's, which Delhi residents regularly flocked to for mouth-watering savouries or ice-cream. Its other immensely popular location, near the Chanakya Cinema hall, also no longer exists. "That is part of life," says Samir Kuckreja, Managing Director of Nirula's Corner House. "Those were leased properties and we lost the leases. But we have three new homes in CP alone."

That may be so, but it could also be a metaphor for what has happened to Nirula's. In the past 15 years or so, Indian consumers have gotten increasingly younger and armed with more disposable income than ever. They've become hungrier for food outside home, frequenting fastfood chains such as McDonald's, Domino's, Pizza Hut, KFC and others-even fuelling the rise of formidable domestic players, such as Haldiram's and Bikanerwala's. Yet, Nirula's has atrophied, unable to exploit this valuable demographic, despite its storied brand name and once-loyal fan following, having ceded acres of ground to its more agile fast-food competitors.

Still, it would be foolish to write off this fast-food chain. For one thing, it has relatively new owners-Navis Capital found enough value in it to buy out the founding family for Rs 90 crore, three years ago, kick-starting a comprehensive makeover. Since then, Nirula's new management has put some "best practices" in place: It hired Deloitte for a lean manufacturing project, implemented SAP at the back-end, bought new machinery, and upgraded facilities. The partners with the franchises have invested close to Rs 50 crore since 2006.

In the meantime, Nirula's is chasing a path of growth by trying everything: venturing into new territories, embracing new formats and luring new customers. Primarily known as an NCR player, it is now spread across many north Indian cities and is planning to enter others, like Indore in Madhya Pradesh. Nirula's mode of expansion is diverse.

The chain has ventured into clubs, malls, fuel stations, bus stations, airports and railway stations in order to seek its consumers, and is even considering areas such as corporate parks, educational institutions and hospitals for additional outlets. Its formats range from hotels (just two) to ice-cream kiosks and pastry corners. In its menu, lower-cost options have made an entry. An example: Chillo-an ice-cream priced at Rs 15-which brought in new customers to its outlets this summer.

Of course, this kind of strategy brings with it the eminent danger of spreading the company's resources too thin. Not so, says Kuckreja. "In one sense, there is no direct competitor. We have a unique niche in the market. Most of our new growth is in quick service segment and in areas that have a high footfall and captive business," he adds.

So far, the strategy seems to have worked for the company. "Revenues in the past three years have shown a compound annual growth of 25-30 per cent, even as gross margins have improved by 20-30 per cent," says Kuckreja.Meanwhile, Nirula's has added around 27 outlets, and its new philosophy is "to communicate with the youth without alienating the other segments," according to Kuckreja.

Nevertheless, industry observers feel that other issues dog the brand. Nirula's fundamental message to consumers is still very turbid, they say. Plus, the wide range of items on its menus doesn't help. (see Solution-2). In other words, brand communication needs to get sharper, and that is something that, Kuckreja promises, is in the pipeline. Still, other problems remain: In some locations, you have to queue outside in the searing heat to order, then make a mad dash inside for a table. Maintaining quality service while growing rapidly will therefore be a challenge.

Still, fact is, Nirula's problem of plenty may actually be its biggest strength. Today, the average Indian family is riven with competing choices-the son wants a burger, the daughter an ice-cream sundae, the mother a pizza and the father, some good ol' butter chicken. Nirula's can appeal to all four in one go. If Nirula's sticks to catering to the diverse cosmopolitan palate-yet gets its service management right and creates some buzz around its brand- it may still have a shot at regaining its lost glory.

Making its own market...