Corporate
Aviation is still hitting the headlines, for all the wrong reasons. The International Air Transport Association, an umbrella body of all travel agents, suspended Kingfisher Airlines from its clearing house following mounting unpaid dues. The airline and Air India are also having to face increasingly agitated pilots, so much that the former CEO Sanjay Aggarwal warned of a possible shut down  (see Losing Colour, BT, March 18).

Shares of Reliance Industries, India's top company by market capitalisation, have fallen by nearly 20 per cent over the past 12 months, but Chairman Mukesh Ambani is still Asia's richest person with a net worth of $26.8 billion. The Daily Bloomberg Billionaires Index, on its launch day, placed Lakshmi Mittal, Chairman of the world's largest steelmaker ArcelorMittal third on the list with a net worth of $23.6 billion.

Ranbaxy Laboratories has launched generic copies of Lipitor, (drug name: Atorvastatin) in Germany, Italy, the Netherlands and Sweden. The launch of the copy of the largest selling drug of all time has come two months before patents expire in these four nations. Lipitor generated annual sales of $13 billion at its peak for drugmaker Pfizer. Atorvastatin is a cholesterol-busting drug.

The long wait is over. Apple unveiled a new iPad tablet with a sharper display and the ability to connect to the Internet on 4G broadband networks. This iPad will have a high-resolution display, a five megapixel camera and even a microphone to take dictation. The new iPad will start at $499 ( Rs 25,000) for a Wi-Fi only model in the US. In India, the entry level iPad 2 will now cost Rs 24,500, compared to Rs 29,500 earlier.

Lehman Brothers, whose collapse in 2008 led to global financial meltdown, has emerged out of a record $639-billion bankruptcy. Lehman will start distributing about $65 billion to creditors whose claims total about $300 billion.

BP Plc reached an estimated $7.8 billion settlement with businesses and individuals in a bid to end litigation in the 2010 Deepwater Horizon oil rig disaster, the biggest offshore spill in US history. The UK-based energy major is also facing $17.6 billion in fines for pollution law violations.

As Indians await the new Budget, here is what neighbouring China is up to. Premier Wen Jiabao set the economy's growth target at 7.5 per cent, lower than the 8 per cent it has stood at for years. Central and local government spending will rise over 14 per cent to $1.97 trillion. Social security and employment and affordable housing received the largest spending increases - 21.9 per cent and 23.1 per cent, respectively. China will boost defence spending by 11.2 per cent in 2012, to $110 billion. 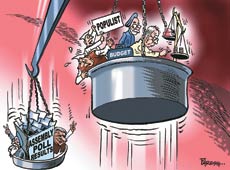 On the day when the results of five assembly elections shocked the ruling Congress out of its complacency, Indian Railways brought out a notification hiking freight rates by up to 20 per cent for several commodities ranging from coal to fertilisers. The hike has come at a time when the Railways Minister Dinesh Trivedi is under pressure to pull the state run transporter out of the financial mess created by his predecessor and party boss Mamata Banerjee.

The Indian cotton industry was taken by surprise by a ban on exports of raw cotton. India is the world's second biggest exporter of cotton after the United States. With Agriculture Minister Sharad Pawar claiming the decision was taken without his consent, and protests mounting, the government is left looking for a revocation of the ban.

Despite slowdown worries, job creation seems to be progressing well. According to IDC, cloud computing will generate two million jobs in India, mostly in manufacturing and communications and media, by 2015.

$2 billion Worth of India's first Infra Debt Fund, which will be set up by ICICI Bank (with 31 per cent stake), Bank of Baroda (30 per cent), Citi (29 per cent) and LIC (10 per cent) as a non-banking finance company. IDF will raise debt capital from domestic and foreign resources and invest in infrastructure projects that have completed one year of operation under the PPP model.

Markets
The Reserve Bank of India is in a hurry, cutting cash reserve ratio, or CRR, the percentage of deposits that commercial banks have to keep aside with the central bank, by 0.75 per cent to 4.75 per cent. This action was expected at the mid-quarter review of the monetary policy on March 15. Banks are now expected to meet the demand for money that is surging due to advance tax payment obligations of corporates.

The auction of Oil & Natural Gas Corp's shares turned into a near fiasco. The issue has been fully subscribed though, thanks to LIC, which ended up picking up 37.71 crore shares to raise its stake to 9.47 per cent. The government finally raised Rs 12,770 crore from the auction of 420.3 million shares.

Coming Up
The Organisation for Economic Cooperation and Development will release its interim assessment of economic outlook on March 27.

Legislation to bring in an emigration authority in the next session of Parliament is on the anvil. It will have a comprehensive database of Indians working abroad, and will facilitate regular and legal migration of Indians to other nations.

The International Conference on Wealth Management & Financial Services will be held in New Delhi on March 19-20.