News that you may have missed last fortnight
Print Edition: Oct 13, 2013 Shoppers are still streaming forth this festival season

No downturn: Whatever the macro-indices may say, shoppers are still streaming forth this festival season. With discounts and freebies raining down, retailers hope for double-digit sales. "The sale period is a very good time to engage with the customer at the periphery, to get her initiated into brands," says Pakhie Saxena, Associate Director of Retail at Technopak.

CORPORATE
Indian drug makers are coming under increasing scrutiny of American regulators. In a further setback to Ranbaxy, the US Food and Drug Administration has banned Ranbaxy's third plant in Mohali from exporting medicines to the US. The regulator has cited as many as 11 discrepancies in the processes followed at the Mohali plant, including the presence of a black fibre in a tablet suspected to be hair from an employee's arm, The company's Paonta Sahib and Dewas units have already been blacklisted. Strides Arcolab's injectible arm, Agila Specialities, recently received a warning letter for violating manufacturing norms. This puts at risk the company's $1.8-billion pending deal with US-based Mylan Inc.

Economic gloom continues. Advance tax collections from the top 100 corporate houses of Mumbai showed muted growth for the September quarter. The collections for the first two quarters from the country's financial capital, which contributes over a third of the income-tax collections nationally, have grown 11 per cent as compared to around nine per cent in the September quarter. Asset quality deterioration and treasury losses have hit state-run banks. The Mukesh Ambani-led Reliance Industries paid Rs 1,670 crore as against Rs 1,534 crore in the same period a year ago.

The pace of growth of advertising in the second half of the current calendar year has slowed to 4.7 per cent from the 7.3 per cent estimated a year ago, according to a report by India's largest media agency network, GroupM. 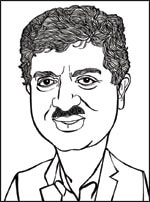 Nandan Nilakeni
The head of the Unique Identification Authority of India Nandan Nilakeni may contest from South Bangalore on a Congress ticket. The Aadhar posterboy and former CEO of Infosys, though, is keeping the cards close to his chest. The RBI has tightened regulations governing non-banking finance companies lending against gold jewellery. Strict documentation for high-value loans against gold and prohibition of misleading advertisements by NBFCs are part of the guidelines.

In a bid to protect domestic industry and reduce gold imports, the government has raised customs duty on imported jewellery to 15 per cent from eight per cent. Gold imports in the first four months of the current year went up 87 per cent to 383 tonnes. High imports of gold, oil and coal contributed to India's $88 billion current account deficit in 2012/13, third-highest in the world.

110 The number of generic drugs from Indian drug makers approved by the USFDA. This has taken India's share in the Original Abbreviated New Drug Application approvals to nearly 40 per cent in the US market so far in 2013.

MARKETS
SEBI has inspected more than 200 stock brokers and sub-brokers in the last financial year, compared to 81 who were similarly inspected in 2011/12. The focus was multi-pronged, including areas such as compliance with norms relating to preventing money laun-dering, settlement of accounts of clients on timely basis, segregation of clients and propreitary funds/securities, know-your-customer norms, clearing operations, etc, said SEBI in its latest report to the government.

Retail prices of onion remain high at Rs 80 a kg, compared with Rs 22 a kg a year before. But supplies from Maharashtra are expected to ease the situation soon.