News that you may have missed last fortnight
Print Edition: Nov 24, 2013 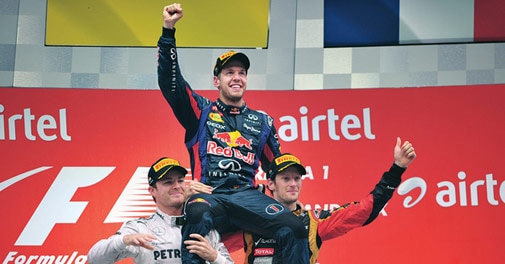 Saluting the Stars: India is saluting two great sports stars for their superlative performance. One, of course, is Sachin Tendulkar who is set to retire in style in front of a home crowd soon. Indian fans had occasion to cheer Sebastian Vettel (centre) who roared into history as Formula One's youngest four-time champion in superlative style as he dominated the Indian Grand Prix recently.

CORPORATE
Reliance Industries is set to relinquish 80 per cent of its Krishna-Godavari gas block, including five discoveries, as the energy major has not adhered to timelines for developing the area. The relinquished area will be auctioned in subsequent licensing rounds. The relinquished area does not contain any producing fields. Natural gas from the KG-D6 block, in which British oil major BP has a 30 per cent  stake, has declined to 14 million cubic metres per day from 60 mmscmd at the end of 2010.
Two of India's top five real estate companies, DLF and Oberoi Realty, reported a  drop in profits in the September quarter due to declining home buyer and corporate interest.

British telecom giant Vodafone Plc has sought the approval of Foreign Investment Promotion Board to increase its stake in Vodafone India to 100 per cent. It will buy out minority partners for Rs 10,141 crore and raise its stake from the current 64.4 per cent.

Infosys has agreed to pay a penalty of $34 million to the United States government for errors in employment paperwork and other visa-related matters.

Maruti Suzuki, troubled by labour unrest in the recent past, has posted a threefold jump in net profit to Rs 670 crore during the July-September quarter. Reduction in costs and higher rural demand helped the auto giant. Subrata Roy
The Supreme Court has directed the Sahara Group to hand over title deeds to property worth Rs 20,000 crore to SEBI by November 11. It said if the group failed to comply, Subrata Roy and the other directors would not be allowed to leave the country without the court's permission. However, on November 1, it modified its order, permitting Roy and two directors to travel abroad. The apex court had directed the group on August 31 last year to refund Rs 24,000 crore by November-end. SEBI had filed contempt petitions against Roy, Sahara India Real Estate Corp (SIREC), Sahara India Housing Investment Corp (SHIC), and their directors.

Apple's profit and margins slipped despite sales of 33.8 million iPhones in its September quarter. The US tech giant closed out its fiscal year with a net annual profit of $37 billion. The iPhone 4S will now become the entry-level model to push sales in emerging markets including India, said CEO Tim Cook.

Toyota Motor Corp is numero uno again. The Japanese carmaker kept its lead over rivals General Motors and Volkswagen AG this year, January-to-September global sales figures showed. Toyota's groupwide sales totalled around 7.4 million vehicles, up 0.1 per cent from the same period a year ago. Strong sales in the US offset slowdowns in Thailand and China.

ECONOMY
Credit card dues grew just 2.1 per cent to Rs 23,500 crore year-on-year in September 2013, against 21.8 per cent growth in September last year.  Data from the Reserve Bank of India showed that banks have not been growing their credit card portfolios since May 2013. Credit card loans had been showing year-on-year growth in the range of 20 to 27 per cent before May 2013.
India slid two spots to 134th place in the World Bank's latest Doing Business report. Malaysia advanced for the first time into the top 10 nations that the World Bank deems friendliest to businesses. Singapore led the annual competitiveness scorecard for the eighth straight year. Hong Kong, New Zealand, the US and Denmark, unchanged from a year ago, were in the top five. China slipped five spots to 96th, while the UK dropped to 10th from seventh.

India has slipped five places to 106th spot, way below neighbouring Bangladesh, Nepal, Sri Lanka and China, in the World Prosperity Index, largely due to a poor 'safety and security' environment. In the ranking of 142 countries compiled by the London-based Legatum Institute, India dropped from 101st position last year, while Norway continues in the top spot. India has has slipped in the prosperity index rankings consistently over the last five years.

$8.4 bn: India's remittance inflows from Saudi Arabia in 2012. The West Asian nation is second only to the US in terms of remittances, and is estimated to have sent over $27.6 billion of remittances across
the world in 2012, according to the World Bank. After India, Egypt ($5.7 billion)
and Pakistan ($3 billion) topped the list of beneficiaries.

$1.4 bn: Foreign direct investment into India in August. FDI inflows have declined to an eight-month low, down 38 per cent year-on-year. From April to August this year, FDI grew a meagre four per cent to $8.46 billion.

Markets
The general insurance industry is likely to reach a gross written premium (GWP) of Rs 3 lakh crore by 2025 with a conservative  compound annual growth rate of 13 per cent, a FICCI report said. The GWP potential is estimated at Rs 4.8 lakh crore by 2025 if a higher penetration level is achieved during this period. Currently, the general insurance market is pegged at Rs 70,000 crore, from a Rs 12,000-crore top line industry in 2001/02.

Facebook's latest quarterly results showed continued strength in mobile advertising, which spurred
a 60 per cent increase in revenue in the July-September quarter.

Coming Up
A five per cent stake sale in state-owned Coal India is likely to take place either in November or December, said coal minister Sriprakash Jaiswal.

Prime Minister Manmohan Singh has convened a meeting on November 13 to discuss bottlenecks in the progress of the greenfield airport at Panvel in Navi Mumbai.

The Planning Commission has convened a meeting of various ministries in November to discuss the ban on mining in some states and related issues.