People and events that were in news recently
BT Team | Print Edition: February 15, 2015

1% > 99%This is not a puzzle. The world's richest one per cent will own more than half the wealth by 2016, or more than what the rest 99 per cent will own, according to the anti-poverty charity Oxfam. The richest 80 persons alone own $1.9 trillion, which is more than that owned by the 3.5 billion people at the bottom half of the income scale. Thirty-five of those 80 are Americans, with a combined wealth of $941 billion. It took a while but one of the regulars on this page is back. This time, N. Srinivasan has been barred by the Supreme Court from contesting Board of Control for Cricket in India's elections, to be held within six weeks, unless he gives up his commercial interest in the IPL franchisee Chennai Super Kings. The court struck down the cricket board's amendment to its constitution that allowed board officials to have commercial interests in the IPL and Champions League T20. The two-judge bench called the amendment "the true villain of the situation at hand".

"Mr Roy is an interesting guy...I have to be careful when I say these things - but I can be sweet when I talk... you get more with honey than with vinegar"

Says Saransh Sharma, CEO of Mirach Capital Group, which plans to extend a one-year loan of $2 billion to Sahara Group, in Mint. The interviewer asked Sharma how he had approached Subrata Roy. Mirach expects the loan to become an opportunity to acquire some of Sahara'sbest assets

Not quite there yet

South Korea's POSCO inaugurated a steel mill on January 22. But that means little to its decade of struggle to get off the ground in India. The inaugurated mill, of 1.8 million tonnes a year capacity, is in Maharashtra. The company's flagship project, a 12 mtpa mill in Orissa, still sees no light at the end of the tunnel.

EBay Inc plans to break into three different companies, reports Reuters. It will spin off its payments division, PayPal, creating two publicly-traded standalone companies, and will either sell its eBay Enterprise unit or float a public offering for it. The moves come as analysts wonder how long eBay can hold its own in the face of the march of Amazon, Google, and Alibaba. 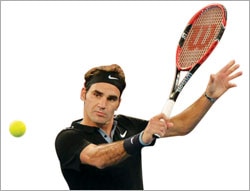 "Does it mean I have got to win now?"

That's what Roger Federer asked during a press conference at the Australian Open. The subject was the sharp jump in his country's currency, the Swiss Franc - 41 per cent against the Euro at the time of going to press - as a result of the Swiss National Bank's surprise decision to remove its currency cap. Federer, according to Bloomberg, is the biggest earner in the history of tennis with $88.7 million in prize money alone. He lost in the third round at the year's first Grand Slam.