A 41 MP camera sensor? Are we talking about a cell phone or a DSLR? Yes, were a talking about a mobile, but one with camera specs that are yet to make its way into even DSLRs. It's closest competitor on the megapixel scale is the Nikon D800 with 36MP. Does this mean the Nokia 808 PureView will give digital compact cameras and DSLRs a run for their money? Read on.

LOOK & BUILD
As the N8 showed the world, Nokia has always been good with camera phones. This time, the company upped its game significantly by focusing on creating a 41MP sensor for a phone. With curved edges around a 4-inch capacitive touchscreen, the 808 does not look very different from other smartphones. But then you notice the hump which houses the camera lens and the Xenon flash. Admitted though, its 13.9 mm thickness is not really cutting edge. Volume controls, lock key and dedicated camera key are on the right and ports on the top. 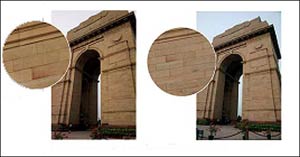 (Left): Pureview image; (right): Canon 5D; Insets 100% zooms of images
The 808 PureView takes smartphone imaging to a new level. But it loses out by running the old Symbian Belle operating system which is a few generations behind iOS, Android and Windows Phone operating systems. It is not a bad OS. It just feels a bit old fashioned. Not bad for first time smartphone users and Symbian fans though.

PUREVIEW MAGIC
Yes, the 808 PureView has a 41MP sensor. But its default image capture setting is 5MP and this can be shuffled between the 8MP and 2 MP. Nokia uses pixel oversampling so that data captured using this 41MP image sensor creates an 8 or 5MP image with great details, sharpness and reduced noise. We played around with the camera interface and managed click pictures at a maximum resolution of 38MP, not 41MP. At higher resolutions the PureView magic doesn't work. The images captured at 38MP resolution were around 12 MB each.

STILL IMAGING
We were able to zoom in 100 per cent to focus on a small portion of images taken with the 808 without any distortion. The PureView's focal length is equivalent to 35mm of full-frame cameras and at that range the phone's results were comparable with our five-year-old Canon 5D's. However, images shot by a new Nikon V1 and Nikon D80 seemed to put the 808's in the shade. In daylight, Pureview defeated some of the best point-and-shoots. The details, sharpness and colours were impressive. However, in low light, though the images were sharp, the background had a marked yellowish tint.

DOLBY HEADPHONE
Another feature that caught our attention was the superb sound output on the Pureview. This smartphone comes with Dolby Headphone technology that gives a surround sound-like experience that makes watching movies and videos a pleasure.

BATTERY
Although we are not big fans of the Symbian OS, there is no denying the fact that it works in favour of the hardware. Using fewer resources, it manages to give us good battery backup. A single charge lasted close to a day and a half of vigorous use, including a lot of photography.

VIDEO SHOOTING
The biggest showcase of the 808 PureView's video capturing capabilities was the phone's advertisement shot with it. While the sceptics claims Nokia used additional accessories and editing software, for a layman, the Full HD video capture is amazing. One can lilnk the phone to an HD TV with an HDMI cable to play the videos. The sound recording is also top notch and hardly seen in smartphones.

Vu 3D HD Video Camera: Should you buy it?

Asus G75VW could give the Alienware a run for its money