Arvind P. Datar says every budget in our country seems to pursue a single-minded agenda of raising the tax rates without any concern for the manufacturing and service sectors.

The first budget of the new decade was a profound disappointment. The only welcome change was the introduction of the self-assessment procedure for imported goods. There are three main objectives of any budget - to modify the existing tax system, to achieve specific economic and social objectives, and to balance receipts and expenditure while making provisions for the government's deficit.

The first objective must have a close connection with the second, and any tax structure must be such that it facilitates faster economic growth and effective attainment of social objectives. 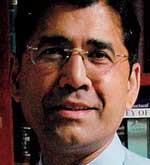 Arvind P. Datar
Unfortunately, every budget in our country seems to pursue a single-minded agenda of raising the tax rates without any concern for the manufacturing and service sectors. The manufacturing sector in India has been rendered uncompetitive on account of poor infrastructure, erratic power supply and a horrendous taxation system.

Very often, our tax system makes it viable for a product to be imported from low-cost manufacturing hubs such as China. Similarly, the manner in which service tax is being levied will soon ensure that our services sector is also crippled. There are seven fatal flaws which have now become a permanent part of our tax laws and the future looks very grim unless these are rectified.

Absence of impact assessment: There is no assessment of the impact of a new levy on a particular sector or the industry in general - who will be affected, how easy will it be to collect the tax, or whether the levy is equitable and fair. This year's budget, for instance, seeks to levy service tax on health care. All "hospitals with 25 or more beds that have the facility of central airconditioning" will be brought under the service tax net. Every hospital with 25 beds is bound to have an operation theatre and therefore will have central air-conditioning in some part of the building. In fact, one way to avoid the tax is to install window air-conditioners and escape the levy.

Services in government hospitals are in a dismal state and the vast majority of the population is forced to go to private hospitals. Levying service tax on such a sector is reprehensible. The state has failed to provide basic health care and the least it can do is to avoid making it even more expensive.

Another such example is the levy of service tax on commercial coaching centres. Once again, the teaching standards in our schools and colleges force parents to opt for extra tuition for their wards. It is equally unfair to levy service tax on such activity.

Excessive taxation: India continues to be the most heavily taxed country in the world if all direct and indirect levies are taken into account. The increasing trend of multiple levies of VAT and service tax on the industry has exacerbated the woes of the taxpayer.

Total uncertainty: The uncertainty of our tax laws makes long- or even medium -term planning virtually impossible. For example, excise duty was to be levied on branded jewellery in 2005. Detailed representations were made to the finance ministry pointing to the impracticability of such a levy and the proposal was dropped. Inexplicably, the item will now be taxed.

The special economic zones, or SEZs, are also victims of such uncertainty and no unit in any SEZ knows exactly what is its tax liability for the next 12 months.

Complexity: It is ironical that every finance minister swears by simplification and rationalisation, and does just the opposite. The classic example is the new Direct Taxes Code, which is more complex and irrational than the Income Tax Act of 1961. Service tax, with its new set of rules framed in 2011, has now crossed the stage of complexity to become totally incomprehensible.

Absence of execution: In 1789, Thomas Jefferson, one of the founding fathers of the US Constitution and third President of the republic, stated that the execution of laws is more important than the making of them. However, in India, the failure to implement laws continues to be the single largest weakness of the tax system. This year's budget now makes prosecution possible for any service tax violation. But several prosecution provisions in the income tax, central excise and customs laws are virtually defunct as no prosecution is ever initiated. In the last 20 years, there are not even 10 cases where major offenders have been punished for any tax offence.

Rampant injustice in tax administration: The unfortunate reality of the central and state taxation is that those with money, muscle or political power are least concerned about obeying any tax laws. The organised sector is repeatedly harassed with frivolous showcause notices and absurdly high-pitched demands. To file an appeal, the assessee has to first deposit 30 to 50 per cent of the demand. If the appeal is allowed, the next nightmare is getting the refund. No attempt has been made to check the all-pervasive corruption in the tax departments.

Scant respect for the Constitution: The federal structure of our Constitution has allocated and distributed areas of taxation between the Centre and states. However, the practice of levying service tax on activities already subject to state sales tax continues unchecked as it is always possible to argue that a particular activity, although amounting to a sale, has also a service element and therefore can be taxed. The most shocking example is the levy of service tax on hire purchase and leasing transactions that are liable to pay sales tax. Similarly, the sale of packaged software, which is liable to VAT, is also subject to service tax.

This constitutional indiscipline has now infected state governments too. Software development is liable to service tax but some states are now seeking to levy sales tax or VAT on the ground that it also amounts to a works contract. Such double levy will surely render the software industry uncompetitive. The other pernicious practice is to retrospectively nullify any court or tribunal decision against the assessee.

If our manufacturing and service sectors are to be competitive, these seven fundamental flaws have to be eliminated. We can easily attain a 10 per cent growth in GDP if there is a proper tax system in place. The great German economist, Ludwig Erhard, converted post-war Germany into an economic powerhouse by simply giving adequate incentives through simple tax laws that were easily comprehensible and implementable. There is no reason why we cannot do the same. All that is necessary is to treat the power of taxation as a means to economic growth and not just collection of more taxes.

The author is a senior advocate of the Madras High Court