The result is that investors, both domestic and foreign, who have to deal with the real economy, have lost confidence.
Chaitanya Kalbag | Print Edition: Sept 29, 2013 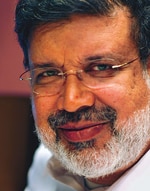 Chaitanya Kalbag
Last fortnight's passage of the Food Security and Land Acquisition legislation was a tactical triumph for the ruling coalition. The Opposition had to bite its tongue; it was a clever feint, but the body blows are landing fast and hard on growth and investment, and we are against the ropes, bloodied and dazed. The truth is that those in authority have lost all credibility, and those in business have lost their social contract. Crony capitalism coupled with cruelly capricious decisions has gutted what was not so long ago a raging bull of an economy.

If you go back to the mid-2000s, India was growing very rapidly and the belief of the middle classes and business was that there was a very talented team running the economy, with an economist prime minister and a half-decent finance minister. There was faith that the central bank would keep inflation low and all would be well.

All of that has come to nought.The RBI let inflation get out of control. Relations between the RBI governor and the finance minister were appallingly bad.

Most of us do not seem to grasp the seriousness of the situation. Food price inflation was ignored under the pretext that the benefits of growth needed to spread to rural India. Gorged with high inflows of foreign funds, the government threw money around like a drunkard at a casino. Indians felt they had an inalienable right to grow rapidly, that India was finally getting the growth it deserved. The goal of "spreading" the riches to the mythical aam aadmi became a moral and not an economic issue.

India did not recognise the fragility of growth. Prices - chiefly of food - rose and rose inexorably. If inflation is very high, people turn away from money. They stop saving through the financial system and turn to gold.

What had almost never happened in any developing economy happened here - as the economy slowed down, there was a blowing out of the current account. Instead of imports slowing, Indians shipped in more and more gold. As the downturn deepened, investments fell and savings fell even more because of inflation, so people 'saved' with gold.

India's current account was being financed by foreign savings, a.k.a. foreign fund inflows. That was fine so long as growth was rapid. But in 2012 India really started to slow down. This had nothing to do with the United States, or Ben Bernanke, or the terror of "tapering". Simply put, foreigners became very reluctant to lend money to spendthrift India. The rupee's exchange rate began to weaken a little over a year ago. When P. Chidambaram took over he initially tried to restore the credibility of the government but here's what happened:

1. The government still did not tackle Consumer Price Inflation.

2. Chidambaram's attempts to introduce reforms and reduce the budget deficit proved to be a chimera. The bankruptcy of policy was badly exposed when the government passed the Food Security Act. This meant that it could not care less about the budget deficit.

Gold imports will climb even higher in the months ahead. The rupee, which has already been factored in at 70 to the dollar, will slip even lower.

The trouble is that our policy dinosaurs don't view inflation as a problem or growth as fragile. The result is that investors, both domestic and foreign, who have to deal with the real economy, have lost confidence.

The two most important and critically urgent goals now are: keep inflation low, and keep the budget deficit under control, or we will end up like Zimbabwe.

"I would not use 'crisis' and 'India' in the same sentence," new central bank Governor Raghuram Rajan told reporters on September 4. Yes, but how quickly have 'growth' and 'India' become antonyms.

India needs to tell investors it's open for business