'Politicians need to grow up in a hurry'

In the past three decades, we have seen a precipitous decline of the institutions of a Constitutional democracy in India. We have moved to a phase of populist democracy. The line of demarcation between a populist democracy and mob rule is often thin and indistinguishable.

If you do not strengthen the institutional safeguards of Constitutional democracy, no amount of curative institutions such as Lokpal, Ombudsmen and the like, will be of much use. We must take steps to ensure a choice of right judges to the courts, right personnel at the Election Commission, right members of elected bodies. Insisting on a powerful Lokpal alone is something akin to opening up new graveyards in anticipation of an epidemic outbreak. 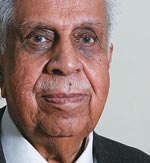 M.N. Venkatachaliah
The next decade of this century is going to be the most stunning for our civilisation. The tremendous exploits of science, particularly in biology, will influence the future of man on this planet. Our contribution in this field is dismal. Take, for instance, how many Fellows of the Royal Society are from Australia: 168. India is 50 times its population but we have about 18. Without excellence in science, you will have no technological support for economic development.

We need at least 15 per cent of our population between 18 and 24 years in universities. We have now just about eight per cent. And, this does not factor in the poor quality of our university education.

Then, there is a marked deficit in the legitimacy of democratic representation in our Parliament and our legislatures. Sixtyeight per cent of our members of Parliament, it is said, are elected on a minority vote. The Election Commission is on record that in the state legislatures, if a candidate gets 25 per cent of votes polled, he has a fair chance of getting elected, being first-pastthe-post. That means if a person gets 12 per cent of votes of the electorate, he has a chance of succeeding. More people have voted against him in his own constituency than the votes he has been able to secure.

There are tried and tested systems such as negative vote, power of recall, 50 per cent plus one vote as eligibility, among others, which may have to be tried out in India. In France, a commission - it had Nobel laureates Amartya Sen and Joseph Stiglitz on it - set up to examine measurement of economic growth and social progress found that there is a marked distance between the standard measures of important socioeconomic variables and the public perception of the official versions of it. Both in France and in the UK, it said, only a third of citizens trust official figures. In India, no one seems to even trust them.

The upshot of these omissions for over 60 years is there for all to see. In these volatile times, you cannot manage things by being clever. Politics must rise above politics of vengeance, politics of retaliation and politics of hoodwinking people. Political leaders need to grow up in a hurry. We badly need great statesmen who can steer the country out of the mess that we have made of it.

In this background, any Lokpal set-up has its own limitations. It will survive only if it takes into account the need to strengthen every other institution of Constitutional safeguards. Otherwise, to borrow the words of Nani Palkhivala, it will not take us to heaven but it might only serve to delay our precipitate descent to hell.

The author is a former Chief Justice of India. He also headed the National Commission to Review the Working of the Constitution

As told to K.R. Balasubramanyam

Who will cast the first stone?

Why scaling up is tough