Mahatma Gandhi once asked: It took Britain half the resources of the planet to achieve this prosperity. How many planets will a country like India require!? 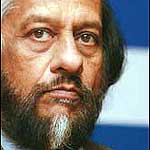 The role of developing countries in meeting the challenge of climate change has been in the news in recent weeks, particularly in the wake of Hillary Clinton’s visit to India. India’s position on the issue has been consistent with the principle of “common but differentiated responsibility”, which is part of the UN Framework Convention on Climate Change (UNFCCC).

The basis for this is that humaninduced climate change is the result of increased concentration of greenhouse gases (GHGs) in the earth’s atmosphere, a result of growing emissions of these gases cumulatively since industrialisation began. The developed countries have reached their current levels of prosperity essentially because of growing use of fossil fuels, which has led largely to the increased concentration of these gases.

To my mind, it is in India’s own interests to ensure that climate change is contained through global efforts. India is particularly vulnerable to the impacts of climate change, which would be in the nature of rising sea levels affecting our extensive coastline, increased intensity, frequency and duration of floods, droughts and heat waves, as well as the adverse impacts on agriculture and human health. One key natural resource that would be affected adversely would be water—its availability in several parts of the country will become scarce and seriously stressed.

Against this background what should India’s position be with regard to containing the emissions of GHGs? I feel India has to negotiate and ensure that the developed countries take major steps to reduce emissions, say, by 2050, as highlighted in the recent G8 Summit, but also in the shorter term by 2020. India, therefore, is well within its rights and ethically correct in insisting that the developed countries take adequate steps to reduce emissions in the immediate future and assist the developing countries in doing the same through financial transfers and access to technology.

However, a country like India should also look at its own choices based on domestic compulsions. If India was to emulate the developed countries in its structure and lifestyles, we would be heading towards a major crisis. Mahatma Gandhi was once asked if he expected India to attain the same standard of living as Britain. He replied, “It took Britain half the resources of the planet to achieve this prosperity. How many planets will a country like India require!?”

For reasons of energy security and reduced levels of air pollution at the local level, India has to move rapidly towards high levels of energy efficiency and greater use of renewable energy in every sector of the economy. Business has special responsibility in this regard and is also faced with enormous opportunities as the world moves to a low carbon path of development and growth.

Market opportunities would, therefore, abound if India establishes a strong industrial base for technologies that use energy efficiently and harness renewable sources on a large scale. Hence, quite apart from India’s negotiating position, which must continue to uphold the principle of common but differentiated responsibility, the country should urgently use indigenous and renewable sources of energy on a rapidly expanding scale.