Policymakers have always thought of temporary relief to farmers ignoring the chronic nature of the ailment.
By D.K. Srivastava | Print Edition: July 16, 2017 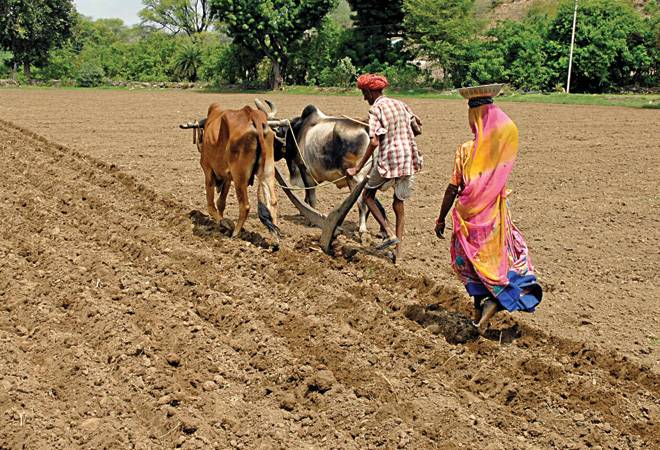 The share of agricultural output in total output has been steadily falling. Photo: Purushottam Diwakar

In Indian agriculture, a good output can hit income. Indeed, a surge in output, otherwise welcome, often results in a significant loss of income. Consider this. Farmers who borrowed heavily to finance purchases of inputs - such as seeds, fertilisers, electricity and transport -in response to the high price levels of a variety of pulses in 2016 reaped a bumper harvest. During 2016/17, as compared to 2015/16, acreage under Tur increased from 3.77 million hectares (mh) to 5.28 mh. Acreage under Urad and Moong increased, respectively, from 2.85 mh to 3.57 mh and from 2.56 mh to 3.41 mh. For Groundnut, the increase was massive - from 2.66 mh to 4.70 mh. The combined output of these four crops increased from 10.18 to 14.55 million tonnes, an increase of close to 43 per cent. Consequently, prices crashed much below the Minimum Support Price (MSP), as demand for pulses did not increase correspondingly. Compared to the prices of Arhar, Moong, Urad, and Groundnut in the corresponding month of last year, the percentage fall in the price index in May 2017 has been 45.4, 32.5, 41.2 and 9.2 per cent respectively. Some output has remained unsold fetching no price. In state after state, farmers are unable to service their loans and are agitating for massive loan waivers.

Until recently, it was the central government which footed the loan waiver bill. This year, the central government has explicitly abstained from entertaining loan waiver demands leaving the states to face the music. State governments, which had shown relatively better performance in adhering to the targets in their respective fiscal responsibility legislations, now find their fiscal discipline eroding under the twin pressures from power sector's UDAY scheme and from the relentless demands for waiving farm loans. The last big loan waiver came in 2009 when a loan waiver of about Rs 71,000 crore (July 2009 Budget presented by Pranab Mukherjee) was announced by the central government. That year, the central government's fiscal deficit shot up to 6.4 per cent of GDP which was more than double the limit of 3 per cent under the Fiscal Responsibility and Budget Management Act (FRBMA). The slippage on debt and deficit since then has not allowed the central government to reach its statutory limit of 3 per cent. According to available information, five states -- Uttar Pradesh, Maharashtra, Andhra Pradesh, Telangana, and Punjab -- have already made commitments, which together may amount to about 0.8 per cent of the estimated FY18 GDP. Other large agricultural states such as Tamil Nadu, Madhya Pradesh, Bihar and Odisha would find it difficult to resist the mounting pressure. Thus, the recent Bank of America Merrill Lynch estimates of increase in states fiscal deficit by 2 percentage points before the 2019 general elections because of farm loan waivers can be considered realistic.

Inspite of periodic loan waivers, there has hardly been any impact on reducing farmers' vulnerability to output-price cycles. Droughts give output shocks. Abundant production gives price and income shocks. The typical Indian farmer is ill-equipped to face either. In both cases, part of the burden, to the extent of the loan waiver, is passed on to the central or the state government. The rest of the unserviced loans add to the NPAs of banks and cooperative societies.It was estimated in 2013 that agricultural NPAs accounted for about 42 per cent of the priority sector lending which included micro and small enterprises, affordable housing and student loans.

These problems are only symptomatic of a long standing structural economic malaise affecting India's agricultural sector reflecting multiple policy failures. The share of agricultural output in total output has been steadily falling from around 55 per cent in the early fifties. The high rate of dependence of India's population on farming activities directly or indirectly, is way out of line compared to the world. While the share of agricultural output in total GVA (gross value added) has fallen to less than 15 per cent, more than 50 per cent of the population depends on agriculture. Since the average growth rate of agriculture is distinctly lower as compared to industry and services, the growth in per capita income of the agriculture-dependent population is extremely low, keeping most of these people under or close to the poverty line. India's policy failure has been the inability to shift the large agriculture-dependent population to more productive activities in industry and services. Policymakers have always thought of temporary relief to farmers, ignoring the chronic nature of the ailment.

Since agriculture is a high risk economic activity with a low average rate of return, it has not attracted much investment from the private sector.

Finding solutions along old beaten paths cannot address the chronic imbalances of India's agriculture. Agricultural markets have been over-regulated and forced into excessive fragmentation through policy intervention. Agricultural marketing is characterised by a variety of rigidities. An all-India market for agricultural produce does not exist. Inter-state movement as well as inter-local body movement of farm output has remained subject to a variety of restrictions. As a result, regional pockets of deficiency and surpluses often co-exist across the country. An all-India market for farm output has remained elusive.

Attracting capital and technology into agriculture, requires uplifting the scale of average farming activity. Leasing of farms to big investors resulting into larger scale operations is an option well worth examining. The farmers whose lands are so leased may not only retain ownership but also be guaranteed employment on the land. This also requires much better and computerised records of ownership of farms across states and financial support to potential investors in agriculture. A number of studies show that larger average farm sizes are correlated with larger per capita GDP. Bigger investors can bear more risk.

Further, both central and state governments need to develop better forecasting models to anticipate output and price movements well in advance so that remedial actions including export and import interventions and other policy initiatives are taken up much before crisis hits.

The author is a Chief Policy Advisor, EY India

The Curious Case of a Clean Clean Indore