Even if peaceful conditions return soon in the Arab world and the OPEC makes up for the fall in production by pumping extra oil, prices are expected to remain at around $100 a barrel or higher for the next couple of years.

The price of crude has flared up sharply following the political turmoil in the Arab world. But even if peaceful conditions return soon and the Organisation of Petroleum Exporting Countries makes up for the fall in production by pumping extra oil, prices are expected to remain at around $100 a barrel or higher for the next couple of years.

The challenges for India, in particular, are serious and multiple. We faced a similar situation in 2008/09 when crude prices had risen to even higher levels. The situation was then managed on an ad hoc basis by abolishing the import duties on crude and reducing those on petrol and diesel; replacing the ad valorem excise duties on petrol and diesel by specific rates; raising the product prices marginally; and meeting the under-recoveries of the oil marketing companies by about one-third from upstream oil companies and the remaining two-thirds through Central government bonds. Since then, petrol prices have been decontrolled and import duties restored. 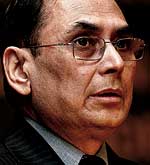 One option is to keep product prices under government control; another is to decontrol the prices of diesel and kerosene with in-built safeguards for the stakeholders.
So, one option is to keep the product prices under government control and balance the interests of the stakeholders, as was done in 2008. Another is to decontrol the prices of diesel and kerosene as well, with built-in safeguards for the stakeholders. This can be done by taking the following steps: reverting import duties to 2008 levels; state governments replacing ad valorem sales tax by specific rates (pegged to a specified level of crude price, say $60 a barrel, since ad valorem rates at high crude prices would result in undue gains for the government at the cost of consumers); the Centre making the burden-sharing mechanism by oil companies transparent and formula-based (upstream PSUs may contribute a specified amount, say, 60 per cent of the incremental realisation when crude prices are above $60 and 80 per cent when crude is above $80. Downstream companies may contribute 50 per cent of the incremental rise beyond, say, $70 a barrel. The companies' contributions should go towards subsidising diesel). With such stipulations, it may be possible to decontrol diesel prices. Even so, if petrol/diesel prices seem too high for consumers, excise duty may be cut accordingly. It should be noted that in the absence of taxes, for every one dollar rise per barrel in international product price, domestic petrol and diesel prices would go up by only 30-35 paise per litre.

Kerosene prices can also be freed if direct cash subsidies are given. Over 40 per cent of kerosene is estimated to go into the black market, so the allocation to the public distribution system may be cut by as much, reducing the subsidy cost significantly. (On LPG, the subsidy may have to be continued.) But in this way, prices of petrol, diesel and kerosene will stand decontrolled and the annual subsidy burden will be half that in 2008/09. The burden on oil companies will also be lower than in 2008/09.

The longer-term management of the oil situation is still more important. Four steps are imperative. First, diplomatic efforts need to be intensified to bring about an understanding between the producers and the consumers. Secondly, the efficiency of oil consumption in India has to be improved. Thirdly, our addiction to oil has to give way to diversification of the fuel basket. Fourthly, a new policy thrust to domestic exploration and production of oil and gas is overdue.

The 2005 hydrocarbons policy, framed when oil prices were at half the current level, needs an imaginative revision.

The author is a former Petroleum Secretary