In India, what women wear to work is a big determinant of how they will be accepted in the workplace. In the 1970s and 1980s, wearing a sari was a must to signal that you were an executive and not support staff, and wanted to be taken seriously

In the 1980s, I used to joke that slides must be projected on the ceiling, because that's where most men in my client offices were comfortable looking rather than making eye contact with me as I presented; and that even if I took the illiterate office peon to the meeting, they would talk business with him and not me, a mere woman. Apparently, things have got better over time; but, 35 years later, such attitudes have not receded into folklore. Men today are very comfortable having women co-workers doing the same job as them. But young women tell me that at meetings, their male colleagues of the same age get acknowledged and included far more easily than them. Thirty years ago, I used to get routinely lectured by well-meaning senior men on appropriate behaviour at meetings - "don't thrust yourself into the limelight; be demure, not pushy or 'over friendly'".

Young women tell me that even today there are behavioural stereotypes that they are encouraged to adopt in order to smooth out their path and not have labels that stick. The New York Times, in a recent editorial, discussed the 'bitch label' that clings to Hillary Clinton: "You can be too loud, too ambitious, too emotional, not emotional enough? you can rally millions of people to vote for you. You can do anything and everything, and it doesn't matter." They call it the "time-honoured tradition of going along to get along" that afflicts women, not just in politics but in other walks of life, too.

A 30-year-old woman manager recounts how she was talking tough with a defaulting vendor to fix a problem, when she was told to step aside by male colleagues her own age who did pretty much the same thing and claimed victory. When she protested, they told her that coming from her, such behaviour would not have worked, and that the outcome was more important than the principle. In the higher altitudes of the boardroom, the sudden scramble to train new women directors, while assuming their male colleagues are smart enough to learn on the job, is as bafflingly sexist. 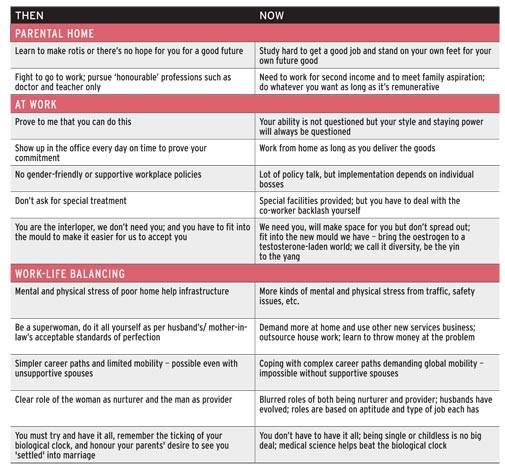 In India, what women wear to work is a big determinant of how they will be accepted in the workplace. In the 1970s and 1980s, wearing a sari was a must to signal that you were an executive and not support staff, and wanted to be taken seriously. But now, the compulsory bondage of 18 feet of fabric has been replaced by some version of the burkini-bikini debate. At the premier IIMs, where we hope to spawn confident millennial women who will go on to define "be yourself" freedom for women in the workplace, the placement committee (mostly comprising men) decides what the women should wear to job interviews, and the decree is that dark-coloured western formals alone will do. The women accept without a murmur. Worse, when I went to address an incoming batch at a well-known IIM, which claimed a whopping 33 per cent of its students were women, the women were dressed exactly like the men - grey t-shirts and blue jeans - so much for diversity. And the story goes that a young woman wearing a skirt was sent home (and she went home, too) by the security guard in an IT establishment in South India, because it wasn't decent enough.

But, of course, things have changed - creeping, mixed blessing change, but change all the same. Preeti Reddy, the CEO India of Kantar, comprising all the WPP Group's market research companies, and her team of thoughtful bright women market researchers of all ages, helped me put together this compendium (above) of what's changed, as did several women I talked to in the 28-32 age group. ~

The writer is an independent market strategy consultant