There is a helping hand for the IMF and some progress has been made on trade. The G-20 summit managed to forge a consensus on some thorny issues after a brainstorming session.

In the G-7 Finance Ministers’ meeting in October 2008 in Washington, President George Bush had underscored that the next meeting of G-20 would be important in finding solutions to the economic crisis. Subsequently, the UK Treasury prepared an agenda paper for the London meeting. This covered: (a) coordinated macroeconomic action to revive the global economy, stimulate growth and employment— review measures taken and possible further steps; (b) reform and improve the financial sector and systems and gauge progression on the Washington Summit’s plans; and (c) reform international financial institutions, like IMF, World Bank; and Financial Stability Forum (FSF). Let’s try and analyse if any headway was made on the ambitious agenda laid down for the G-20.

Thrust on trade
There are four elements to what we got on trade. First, the communiqué says there will be no competitive devaluation of currencies. Second, there is a vague commitment to completion of Doha talks, though it lacks a precise timeline (unlike the Washington declaration). For instance, in Washington it was said: “We shall strive to reach agreement this year on modalities that leads to a successful conclusion to the WTO’s Doha Development Agenda with an ambitious and balanced outcome.” The London statement is weaker, understandable because no one’s mind, least of all the United States, is now on Doha, not to speak of disagreement between India and the United States on the special safeguards mechanism.

Third, there is agreement that there will be no new protectionist measures. In Washington it was said: “Within the next 12 months, we will refrain from raising new barriers to investment or to trade in goods and services, imposing new export restrictions...”

The London language, however, seems to recognise the fait accompli of protectionism and seeks to minimize it. Remember, G-20 leaders had signed a pledge on November 15, 2008, to avoid protectionist measures. Despite this, since then, several countries, including 17 of the G-20, have implemented 47 measures which will impact cross-border trade. While this trend is unsettling, these measures are unlikely to have had a major impact on trade. Fourth, $250 billion has been promised as trade finance, though, barring $50 billion through a new World Bank programme, little may be incremental. This is a problem with gauging “success” of the London summit. Governments have not been twiddling their thumbs since the global crisis broke and several measures (including on trade finance) had already been taken.

On fiscal expansion, we have got absolutely nothing. The $5-trillion figure being bandied around isn’t new. But since there is already a lot of money in the pipeline, perhaps what is more important is monitoring of implementation, agreements on restructuring distressed assets, banks and the like. Some principles have been agreed to, including on hedge funds, remuneration and credit rating agencies. Beyond this, there is little that is specific, though Financial Stability Forum has been renamed Financial Stability Board, with all G-20 members represented.

However, even a global agreement on some principles is significant. The tax haven initiative should be mentioned in the same breath. The communiqué says the days of banking secrecy are over and sanctions will be taken against countries that don’t conform to disclosure norms (noncooperative jurisdictions). The OECD list will be used for this. 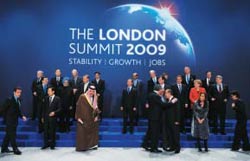 Lifeline for the IMF
The IMF faces an identity and resources crisis and this is an area where London achieved quite a bit and effectively rehabilitated the IMF. The additional resources figure of $1.1 trillion floating around for IMF and other international financial institutions is an overestimate, though.

Not all of this is incremental money. Japan and EU had already agreed to pump in $100 billion each into IMF. The US credit line of $500 billion (New Arrangements to Borrow) for struggling economies had also been known. The SDR (special drawing rights) increase of $250 billion was also expected. What is really new is $100 billion through World Bank and multilateral development banks and $50 billion through IMF (SDRs and gold sales) specifically for poorest countries. Many poor countries have to roll over debt and credit from the West isn’t forthcoming.

Hence, the key question is—how much of these new resources will be available to poorer countries (where growth rebound can actually be faster) and how much of it will be available without conditions? The only specific figure one has is that $19 billion of the SDR increase will be for low-income countries. The alternative resource currency wasn’t discussed and nothing specific emerged on reforming governance and decision-making within IMF and World Bank. A time-table will be drawn up over the next 18 months, hopefully before IMF’s quota review in 2011. However, China has agreed to contribute $40 billion to IMF, without this being linked to changes in its voting power.

Gordon Brown told us the summit established a new international economic order. That’s hype. We will get towards that order eventually, with economic clout of emerging economies eventually recognised. But that is a process and the summit is only a small step. However, something was agreed to. Compared to the disagreements that existed before the London summit, what has been accomplished is not to be sneered at.

— The writer is a Delhi based economist