Yes, it's okay to lust after a tablet. Ever since Apple upended the computing world with its iPad, everyone has yearned to have his fingers on a tab. Of course, the heart is one thing, the head quite another. The brain often looks at the price tab and makes your head nod sadly. Tablets like the iPad and the Galaxy Tab are on the wrong side of your budget.

Your heart persists and you consider the tablets that fit into your wallet. But your head cautions you about a hundred things that could go wrong with cheaper tablets. Are they reliable?

Well, here we are doing your homework for you, testing out some affordable tabs that cost under Rs 15,000. You only need to read on to know whether you should buy one and which one.

Who wants them?
The tablet has earned its spurs in the field of new technologies, with millions of them having sold across the world. But not everyone has the money to splurge on this new breed of gadgets. Hence, the affordable tablets represent a great alternative for those who desire the tablet but don't want to spend a ton on them.

Unlike a PC, a tablet doesn't involve a learning process. So anyone can pick it up. It is intuitive to use and offers an awesome array of downloadable applications. If you are an average user of computing devices, these seven inchers are okay, but they aren't meant for you if you are a big gamer or frequently use heavy graphics.

What can they do?
Don't be deceived. These 7-inch touch devices manage a lot of tasks with ease-Internet access, multimedia and also utility functions like creating documents. Most of the affordable tablets run on the Android operating system that has an inbuilt support for Google services, including Gmail, Google Search, Google Maps, YouTube, etc. And the Android Market has shelves and shelves of free (as well as paid) applications that give your tablet added capabilities. In a compact form factor, the tablet offers portability for a world of connectivity with Wi-Fi, Bluetooth, SIM slot and, at times, even HDMI and USB slots.

How do they stack up against their pricier siblings
Android gives these tablets the capacity to handle almost everything that a high-end tablet does-from browsing to watching videos. The overall experience is good, but you will realise that they are not as smooth as the iPad or the Galaxy Tab. Also, the lower prices mean that these cannot brag about speedy dual-core processors and 1GB RAM like the high-end ones. These tablets are usually lower on specifications with slower processors (ranging between 800MHz and 1GHz), RAM (512 MB) and camera (2MP to 3.15MP). Often, they don't have the latest software either. Most of these tablets run on Android v2.2 or v2.3 and not Google's Honeycomb (v3.0 onward).

What did we test and how?
We picked up seven 7-inch Android tablets that are priced below `15,000. Along with our user experience we also ran a series of benchmark tests to determine the best of the lot. The Quadrant Benchmark is used for testing the performance of the CPU along with the tablet's 3D graphics capabilities. The LinPack test puts Android devices and ROM on the rack. Nena Mark 2 measures performance with advanced graphical effects and hi-resolution graphics using realistic scenes and presents results in frames per second. We rounded it off with the Vellamo Mobile Web Benchmark to evaluate the browser performance of the Androids. For all four tests, higher the score, the better. +Supports high-speed Reliance 3G data network and comes bundled with many lucrative data plans.
+Access to RWorld Online for content related to music, cricket, start talk,
mobile health, etc. along with Android Market Place for downloading applications.
+Responsive touch interface, typing using QWERTY keypad in portrait mode is easy.
- With 800MHz processor the Reliance 3G Tablet has one of the lowest processors among all the tablets tested.
- A slight lag while launching applications.
- Supports calling but on loudspeaker mode only.

+Preloaded with apps.
+Loud sound and bright display.
- Quick to start up but hangs often.
- 800MHz processor and not many common apps available for download.
- Scattered controls and ports make it difficult to use.

+mini HDMI port, Mini USB Port (connector for plugging in USB included) along with Wi-Fi connectivity.
+1GHz processor along with 512 MB RAM.
+1080p video playback at 30fps.
- Google Services not supported. One cannot access Android Market for downloading applications. Instead have access to MeApps for downloading apps.
- Average hardware with sharp back edges.
- No SIM Card Slot, no rear camera. 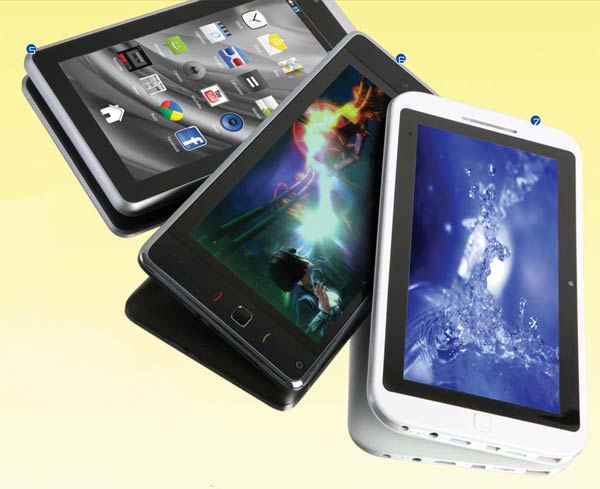 +Good looking tablet with bright display.
+Android 2.3 onboard but the interface looks similar to Honeycomb.
+USB port, mini USB port, mini HDMI port.
- Claims that USB port can be used to plug in data card but it did not work when tested.
- No SIM card slot.
- Heavy to hold.

+A tablet with a kick stand that comes handy while watching videos.
+Has custom user interface with tabs for home, web, entertainment, communication and favourites.
+1GHz processor and 512 MB RAM make it a smooth tablet that launches applications with ease.
+ Proprietary charging port.
- Operates on Android v2.2.
- Average Battery backup of around 3.5 hours.

+USB port along with mini HDMI and mini USB port.
+Can be used for directly playing videos in 1080p resolution from the pen drive.
+ Responsive touch interface, easy to type using the onscreen QWERTY keypad.
+ Good at multitasking, can play games with ease. 1GHz processor along with 512 MB RAM.
- No rear camera, only front facing camera.
- Average battery backup of 4 hours only.

FINAL SAY
Among the seven tablets we tested, the MSI WinPad Enjoy 7, Mercury mTab and TabPlus Rio proved the best. However, none of these support a SIM card slot though the TabPlus Rio and Mercury mTab have USB slots for plugging in data cards. The MSI WinPad Enjoy 7 is really quick to operate. All these tablets face stiff competition from the BlackBerry PlayBook whose prices have been recently slashed to Rs 12,999 for the 16GB version, but only till stocks last. Also, the Playbook 2.0 OS upgrade makes it worth a buy.

All you need to know about Windows 8