Nitin Tangali, a 22-year-old commerce graduate from Ganjam, Odisha, is the eldest among the three siblings and looking for a job. His family, however, is fixated on the Indian gold standard for employment - a sarkari naukri. There are two hurdles. First, recruitment exams that require smart preparation. But most aspirants from small towns and remote areas do not have the means to attend high-end coaching classes in the metros. Second, national-level job tests are held in English or Hindi, and the likes of Tangali, not well-versed in either, are at a disadvantage.

"Every year, five-six crore applicants write these exams and put their money into offline recruitment-preparation companies. This market is now worth Rs 1 lakh crore. But that is not the way to go in this digital age," says OnlineTyari Co-founder and CEO Bhola Meena. Today, the Gurgaon-based edtech start-up (registered as Next Door Learning Solutions) runs one of India's biggest job test-prep platforms on the Web and via its mobile app, and focusses on bank, insurance, railways, SSC, UPSC and state-level recruitment exams. The company currently covers around 23 exams, has a user base of 8.5 million, has held 650-plus mock tests and offers content in English-Hindi and English-Marathi bilingual formats. Next on the cards are Tamil, Telugu, Bengali and Odiya.

"The 'eureka' moment came when we realised the possible reach of mobile technology nearly a decade ago," recalls Bhola, an IIT-Kanpur alumnus and former Microsoft professional. He hails from Rajasthan's Kota, the coaching capital of India, and was aware of what was happening on the ground. Even in 2012-13, students and jobseekers were using smartphones, but few had access to PCs and could not opt for online courses or take mock-tests on a digital platform. "It was critical as all banking exams were happening online since 2011 and we could foresee what's going to happen (except for UPSC, all job exams are now online, and state governments are mulling the same). So, we decided to run our test-prep services not only on the Web but also on our mobile app to ensure maximum access and convenience." The idea was not original but snugly fits in with the smartphone boom. Over seven million users have downloaded the Android app while the company claims to have a million-plus monthly active users on the app and three million-plus on desktop.

Cost and credibility also make the business attractive, says Co-founder Rajveer Meena (not related to Bhola Meena). To start with, annual subscription could be as little as Rs 349 (MRP is Rs 499) and users can prepare for multiple tests for a year. "Affordability is possible because edtech companies are optimally leveraging technology. In the old ecosystem, a candidate could end up paying lakhs because the capex goes up every time a brick-and-mortar company scales up. But we make an initial investment for the platform and then scale up fast without any infra cost. It is a high-margin business; we have 80-85 per cent margin." 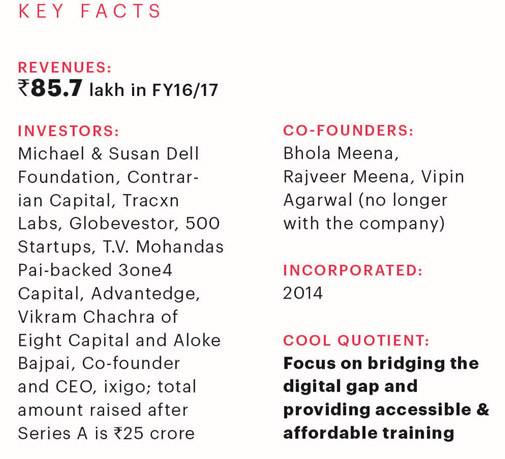 The edtech market is worth $1 billion (about Rs 7,400 crore at Rs 74.15 to a dollar), and will double by 2021, according to a KPMG report. But traction, say the co-founders, has never been a problem. The tricky part is establishing a pan-India service network where everybody can benchmark themselves and focus on the four key elements - study, practice, doubt-clearing and assessment. To ensure high-quality training, the company has come out with a premium service that tracks user performance on a weekly basis and enables expert consultation over the phone. "We are now working on video lessons, online interaction and online-offline collaboration with our 150-plus coaching class partners (they use our software and solutions for a fee) to bring the best of content and training to our users," says Rajveer. OnlineTyari will also expand its team of industry experts as it starts covering more job tests. "All these could be live in the next six-seven months, but right now, we have cracked the assessment part. A total of 55,000 users logged in, took a mock test and got their all-India rankings. We also did a predictive analysis of who would make the cut in the finals and more than 50 per cent succeeded."

The company faces competition from Unacademy, Oliveboard and Gradeup, but says it will be cash positive by March 2019. "We had 100 per cent YoY growth and in the first five months of the current fiscal, amassed as much as we did in the last financial year," says Bhola. But what matters most to the duo is a holistic approach and matching their users' skills with all open positions, whenever possible.

"Let us face it. All these 50 million people cannot land government jobs because there are very few jobs out there. But we have their academic data based on which we can match skills and jobs for the private sector. We did it in Jaipur where there was a recruitment drive for B.Ed. teachers and we can push it more ," says Bhola.